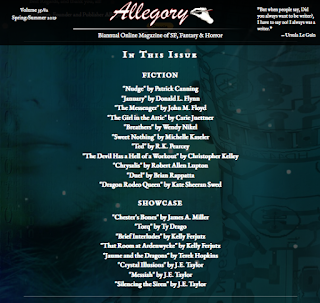 In 1972, Charles E. Fritch published a short story, “If at First You Don’t Succeed, to Hell with It!”, that spoofed the inundation of SF&F submissions queues with “deal with the devil” manuscripts. As the fictional editor in this story writes in a rejection, “I don’t intend on running another pact-with-the-devil story for at least ninety-nine years.” Such was the exhaustion, even forty years ago, with certain tropes in the genre.

Allegory’s Spring/Summer 2019 iteration, Volume 35/62, covers quite a bit of familiar ground. Two stories in the Fiction section involve the Devil, another stars Death, two more have female sex objects (one literal, one a more enigmatic fantasy-realm character who lures a man to his doom), and five other tales use seasoned premises: an old man who sacrifices himself that a young boy might live; a man who goes mad in his bereavement; a woman gradually discovering she’s married an abuser; a child who doesn’t heed her family’s warnings and pays the price; and a rodeo rider with a rival to show up. Only one of the pieces, the story of a guilt-ridden youth who learns the value of life after running into a necromancer, offers a different take on well-travelled themes.

Now, is this a problem? Does it matter if certain ideas in SF&F have become clichéd?

Not necessarily. Allegory is an unusual market, wherein the editorial staff showcases its own stories in another section (eight stories by five authors), and student fiction emerges in another still. Under the Fiction category we find pieces by writers paid $15USD per story—which shapes the pool of entrants differently than for a SFWA-competitive market—but an editorial vision is still clear in what the magazine chooses to publish by authors who’ve submitted work. (And so it is their work that this review will focus on, though the staff stories are not without their charms.)

Namely, Allegory prioritizes plot-driven pieces that build off straightforward premises to produce clear messages. Lyricism and structural play are less important here than fun turns of phrase and competent narrative progression, in which a good bit of characterization can often take a given work far. Granted, some stories in this issue were so plot-driven that strong characterization was absent; and there was quite a bit of filler phrasing, along with odd logical leaps requisite to the plots. But these free-to-read stories include expressly novice work, which gives the whole publication a more relaxed feel—and invites readers to enjoy its offerings in this light.

Take our first story, Patrick Canning’s “Nudge.” It’s the one with Death, and this Death is super cross about not being quite such a terror to humans anymore. The story requires you to accept that people freaking out about nearly dying from allergies, or dedicating their lives to radio shows about triumphing over fears of mortality, somehow does not qualify as a significant fixation on death. The tale’s climax also requires a significant blurring of post-mortem insect activity, the likes of which any forensic scientist would grit their teeth to read. But the narrative voice is fairly pleasant, and Death as a petty-grudge-holder is amusing enough to be memorable.

“January,” by Donald L. Flynn, has an odd bit of world-building underpinning its main conceit, too: a post-apocalyptic landscape where food is scarce but our protagonist still receives prompt service from the company that made the sex-bot who’s become a significant helper in foraging and defense. The main crisis in the story is that he hasn’t had the inclination to copulate for fourteen months, which leads to her trying to adapt to suit his needs better. Then a band of hickish men conveniently appears, growing hostile towards the sex-bot for flimsy religious reasons, and after January is wounded while protecting our lead, he finally finds a desire to dote on her in turn.

Next, the protagonist of our deal-with-the-Devil-styled tale, “The Messenger” by John M. Floyd, is given an obvious monkey’s paw: choose between standing in a telephone booth filling with silver dollars or at the bottom of a pit flooding with water—then pick someone to receive the other fate. It’ll come as no surprise that the telephone booth is a death trap, while a man in a flooding pit will rise to the top, but the nature of the messenger in this story might offer a (morally troubling) twist to some. Either way, the real surprise here is that someone as cut-throat as Joe doesn’t see the trick coming—a common issue with these deal-with-the-Devil premises.

“The Girl in the Attic” by Carie Juettner is likewise straightforward: the moment we’re given four family members’ differing versions of what lies in the attic, it’s easy to surmise from the story’s structure that all will have some truth in them. What the story leaves us wondering is what kind of rotten family would not catch on to what eventually transpires, especially since the ending has the father re-nailing the attic after his and the others’ collective prophecy comes to pass. Sounds like she’s better off where she ends up than living with that group of sadists!

Wendy Nikel’s “Breathers” likewise follows the obvious course from its premise: an old man in plague-ridden times departing on one last ride with a group of civilians striving for safer lands. There’s a young boy on the train, and a tragedy along the way that spells certain doom for almost everyone, and a chance for the old man to pass the torch, which—unsurprisingly—he does.

“Sweet Nothing” by Michelle Kaseler uses fantastical elements—magic mirrors and suits—to tell an uncomplicated tale of a new bride convinced she’s gaining weight and growing hideous (two concepts, I should note, that are unfortunately linked in the piece), when in fact her new husband—with no real depth of character to explain how she fell in love with him in the first place—has been gaslighting her into starving herself and staying where only he can see her. The story ends with her realization of this deceit and her prompt departure (which is possibly the most fantastical part of this tale, considering how difficult many domestic-abuse victims find escape).

“Ted,” by R. K. Pearcey, follows a man whose recent bereavement manifests in madness and paranoia, which are tethered in the loosest ways to Lovecraftian lore. Ted’s disability also figures into his eventual ruin in this story, essentially, of a man lashing out at a young neighbour who steals from him when he has so little to live for as it is. Mundane horror, not SF&F.

Christopher Kelley offers the other devilish tale in this issue: “The Devil Has a Hell of a Workout,” a story crafted around the idea that the Devil couldn’t possibly imagine anyone finding exercise fun, and so completely drops the ball on the design of one particular torture scenario for a victim who is apparently so sociopathic that it never occurs to him he might have been sent to hell for a murder he committed in cold blood. Another problem with such stories is how limited their sense of the real world has to be, because here you have to take for granted that the Devil isn’t familiar with the concept of masochism—and all just for a joke about exercise being hell.

Robert Allen Lupton’s “Chrysalis” then offers us the tale of a man who finds a mysterious book with incantations involving blood and body-part sacrifice to advance through its pages. We don’t get enough of his character to explain why he goes to the wild lengths he does, but neither should we expect much in the way of backstory from a man who plainly names the woman who emerges from this book “Delilah” (the obvious correlate being to the Biblical story of Samson’s ruination). This is a tale where ultimate doom is easily foretold. We’re simply meant to follow along.

Brian Rappatta’s “Duel” offers a bit of a twist, at least, to the usual zombie lore. Here our troubled lead, haunted by his complicity in family trauma and longing to die, encounters a necromancer whose army of the dead protects the town from giant monsters. Chris, in his guilt, eventually wants to join the fray, but the message of the piece—made quite explicit by our necromancer—is that life has battles all its own, which we should try to fight before joining the ranks of the dead.

Kate Sheeran Swed’s “Dragon Rodeo Queen” is fun, if also straightforward: our protagonist has something to prove, wanting to ride a dragon named Purple Rage that has tossed all the best (male) riders come before. She succeeds, of course, to the slack-jawed stare of her opponent, because of a deeper compassion for the dragon that then has her using her winnings to buy his freedom and retire happily. The tale goes down plain and easy, even with the thick cowpoke slang.

Two more stories make up the students’ fiction section of the issue, though—“Smoke and Mirrors” by A. L. Delaney, and “The Brass Instrument” by Joel Davidson—and here one especially sees the difference between leaning on and building from familiar premises. The former is a slight, non-SF&F piece practising the development of narrative tension, with “smoking in a bar” the seasoned narrative device that our protagonist relies upon while processing the slings and arrows of a friend’s active sex life and a sister’s cancer. The latter tale, though, reveals a full and haunting universe at a similarly slender size: its narrator deeply affected by a brush with reality-bending, world-ruining music, then committing to its study even though the consequences might be dire.

In this last piece especially, the allegory to storytelling—its power to create heretofore unimagined worlds using the same few and familiar notes as everyone else—is clear, but also refreshingly conveyed. In an issue of predominantly easy and uncomplicated reads, Davidson stands out as an author to watch for, as he hopefully continues to write in the SF&F domain.
Posted by Djibril at 16:49

Thanks for the great review. As a writer of short stories I find it interesting to read reviews of other writers' short fiction. I have in the past enjoyed some of the stories in Allegory, but I would probably pass over any deal with the devil stories.