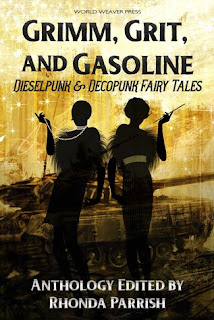 I’m going to be completely honest: before picking up this book I had never heard of “dieselpunk” or “decopunk.” I was born in the 80s, folks. When I was a kid my spec fic hauled its broadsword and steel bikinis and dwarves twenty miles barefoot through the snow. We hardly knew what to make of steampunk when it came ’round with its clockwork and corsets and coalsmoke. So for those old greybeards like myself who have no idea what the kids are doing these days, dieselpunk and decopunk are to World War I and II what steampunk is to the Victorian era. And why not? The Victorian era doesn’t have some monopoly on story potential. Why not weave some spec fic into two of the most tumultuous and historically interesting periods of the 20th century? And why not retell and reimagine well-loved fairy tales so that they take place in those periods? It’s the kind of creativity that reminds me why I love speculative fiction.

First off, I should add the same caveat that editor Rhonda Parrish does in her introduction; her interpretation of all three requirements for the anthology were very flexible. In addition to the two World Wars, there are stories here from as late as the Korean War and as far away as the Dust Bowl, and the “fairy tales” range from the most familiar Grimm/Andersen tales to Pinocchio, an interpretation of Swan Lake, and some random blendings of folkloric elements. And I was on board. Sometimes adhering too religiously to a theme causes an anthology to suffer (a lack of variety was my critique of one of Parrish’s previous anthologies). And lack of variety is certainly no issue here, with stories that vary in setting, time period, and inspiration (I was particularly pleased to note that the authors did not limit themselves to the familiar German, French, and Danish fairy tales, but also Chinese, Japanese, and Norse). And frankly, I’m all for anything that might result in a pre-apocalyptic magic-wielding Tank Girl (has anyone done that yet? Someone should do that).

The result is an occasionally uneven, but overall very enjoyable anthology of deeply varied tales. Some of the standouts for me were, in fact, the jokers in the deck. The aforementioned story set in the Dust Bowl, Laura VanArendonk Baugh’s “To Go West” is an out and out delight, both in its setting (VanArendonk Braugh’s writing brings the dry hopelessness of the Dust Bowl to life) and narrative, drawing its inspiration from the Chinese “Journey to the West” (technically a novel, but it has arguably now reached the level of folklore, certainly as much as Pinocchio, which is also featured in this anthology). In some ways its strength is in how unforced it feels, perhaps because the author places the focus not on the traditional main characters, but on a hapless, disillusioned farm girl who encounters Tripitang and his ragtag band during what would amount to a very minor stopover in their adventures. Similarly, “The Neugdae” by Juliet Harper, the tale set during the Korean War, is a dark, twisted, and disturbing re-imagining of Little Red Riding Hood, in which the titular character is a small Korean girl and the “wolf”an American soldier. On the opposite end of the spectrum is the closest I’ve gotten so far to my dream of the WWII magic-wielding Tank Girl; Patrick Bollivar’s “A Princess, a Spy, and a Dwarf Walk Into a Bar full of Nazis” features a wrench-wielding princess,a dwarf, a drag queen, and a sentient tank fighting Nazi werewolves for possession of an enchanted castle, and there is no part of the sentence that is not awesome. Fortunately, the story is as much fun as the summation.

There were very few duds in the collection, and none of them were truly of poor quality. Lizz Donnelly’s “Evening Chorus” lacked the emotional resonance and core of its inspiration, The Emperor and the Nightingale (primarily the friendship of the two titular characters of the fairy tale is non-existent in the re-interpretation), and Robert E. Vardeman’s “Daughters of Earth and Air” seemed more a warning against the foolishness of its heroine than a story of romance (of course, the same could be said of its inspiration, The Little Mermaid). The only other story I feel I should single out is sadly, not because the story was of particularly poor quality (although there is one ill-conceived plot device I’ll be discussing in a moment). Rather, the word that comes to mind is frustrating. “The Loch” by Zannier Alejandra features a wealth of amazing and compelling ideas that are never given the chance to stretch their wings. Set during World War II, in this story’s universe, criminals serve out their sentence by being transmogrified into inanimate objects while still retaining their minds. So, the main characters of this story are a fighter pilot and his living criminal-turned-plane. They spend their nights circling the dark skies over Britain, shooting down Nazi shapeshifting witches. And if those two sentences don’t have you intrigued, you are dead inside. It’s magickal World War II era flying Nightrider, and I was so on board.

Unfortunately, from a very promising beginning and premise the resulting story falls rather flat. I mentioned before that a desire to completely and faithfully transpose the original folktale into the themed setting can be detrimental to the tale as a whole. Some of the best stories in the collection, like “To Go West,” “A Princess, A Spy…” and Nellie Neves’ “As the Spindle Burns” (which is another tale that I hugely enjoyed), have only the most superficial resemblance to the tales that inspired them, and it allows them a wealth of freedom to grow and expand. Sadly, “The Loch” provides the counter-example. It felt to me as though Alejandra’s determination to hold exactly to the basic narrative of Swan Lake choked all of the novel and fascinating ideas the story put forth, which is such a shame. More dogfights and talking fighter planes, fewer forced marriages and balls, please.

This leads into the only serious complaint I have about the collection, which is also an element of this story (and sadly, in order to go into it some spoilers are necessary). In the story, Odette is one of a number of young Jewish women who escaped from Auschwitz with the help of a witch who transformed them into swans. That same witch was then killed by the guards, and so Odette and her sisters became trapped by the spell. This, in and of itself, is not a bad idea. We then discover, however, that Odile, the treacherous black swan, is another of these women, and she has discovered that the way to regain her humanity is by tearing out the heart of an honourable man.

For those who don’t know, one of the ways the Nazis sought to turn public opinion against the Jewish population was through the old concept of blood libel; the idea that the Jews used the blood of Christians in rituals and magic. And this story is basically confirming that ancient, dangerous, and extremely damaging rumour is true within the confines of the story’s universe. I want to make myself clear: I do not think Alejandra did this on purpose. I think that it was a miscalculated attempt at utilizing old fairy tale tropes. However, when you are writing a story that deals with one of the most (if not the most) horrific genocides in history, not to mention one that occurred in living memory, you must be very careful and very aware of what you are saying and suggesting. Otherwise you may find yourself playing directly into the narratives of the oppressors.

A moment’s carelessness, however, does not detract much from an overall highly enjoyable anthology. There’s a lot to enjoy here, from the novelty of the settings to the variety of stories and inspirations, and honestly there were very few tales that I failed to enjoy at least on some level. Rhonda Parrish continues to solidify her position as a reliable and interesting anthologist, and I’m looking forward to seeing what she’s coming out with next.

And by the way, Zannier Alejandra? Drop the romance, write a novel just about pilot Sig and Reggie the talking plane dogfighting their way through the skies of 1940s Europe, and I will be first in line on release date. That’s a promise.
Posted by Djibril at 15:41