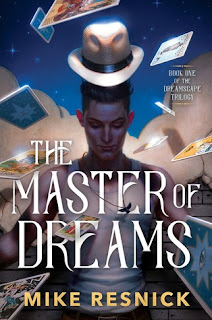 Mike Resnick’s fantasy novel The Master of Dreams opens with a seemingly ordinary couple enjoying what starts out as an ordinary day. Protagonist Eddie Raven is strolling the streets of Manhattan, shopping with his girlfriend Lisa. Or rather, Lisa is shopping, with Eddie tagging along good-naturedly, though he can’t resist tossing out mild protests about the need to visit so many stores. The tone of the book shifts when, at Lisa’s insistence, they stop in at a fortune teller’s shop. A tall man who Eddie thinks looks familiar, though he can’t put a name to him, also enters the store just as Eddie and Lisa begin talking to the fortune-teller, who introduces himself as Mako. It’s odd enough that Mako knows Lisa’s name without being told, but when he tells a shocked Lisa, “‘You will die in seconds!’” the tension ratchets up. Mako then turns to Eddie and says, “‘Why did you come here? You know better!’” (7) Initially, Eddie is ready to dismiss Mako’s words as a fortune-teller’s sales pitch to get the customer to shell out money for a reading. That is, until a gunman bursts through the door and shoots both Lisa and Mako. The gun-wielder turns toward a startled Eddie, who has no idea why all this is happening. Just as a shot is fired in Eddie’s direction, the tall man leaps in front of Eddie to take the bullet.

Eddie hears a voice in his head telling him to run, and listens. He can’t resist returning a short time later to try to make sense of what has happened. The police inform him that the victims have been transported to a nearby hospital, but when Eddie visits the hospital’s information desk, he learns that the ambulance brought two men for treatment, but did not bring a woman. Eddie learns that Mako has succumbed to his wounds, but the tall man—who, the nurse informs him, is named Rofocale—survived. Eddie finds his way to Rofocale’s room, to find him “swathed in bandages from his neck to his hip and attached to half a dozen tubes and monitors.” (12) Despite his ill health, Rofocale is able to communicate telepathically with Eddie. Rofocale scolds Eddie for visiting the fortune teller, telling him he should have known better. Before Eddie can get answers to the questions that are eating at him, Rofocale issues another warning: Eddie’s enemies have arrived at the hospital, and are on their way to Rofocale’s room. Once again, Eddie is compelled to take flight. With Rofocale’s guidance, Eddie makes a “mystic sign in the air” while reciting “words that made no sense to him.” (14)

To Eddie’s surprise, these actions land him in a night club that parallels Casablanca—only in this version, the bar’s patrons include trolls, medusas, and vampires. Eddie’s quick scan of a newspaper highlights other differences. Casablanca Downs features races by six-legged dragons, and Rodgers and Hammerstein have written “a hit musical about farmers opening up a new territory, but the territory was Pluto, not Oklahoma.” (31) Clearly, it might take time for Eddie to figure out what exactly is going on. Rofocale, who is able to communicate sporadically with Eddie between periods of unconsciousness due to heavy sedation, tells him he won’t have that luxury. If Eddie isn’t gone from Casablanca by noon, he’ll be stuck there forever. The good news is that Lisa is alive and well—only here, she is known as Ilsa.

Just in time, Eddie figures out what he needs to do to move things forward, but that isn’t enough to get him back to his home in Manhattan. Instead, he is plunged next into the land of Oz. As was the case with Casablanca, there are bizarre twists from the original. The party Eddie joins is headed to Sapphire City, not Emerald City. Lisa is present here as well, in the Dorothy role although for convoluted reasons she prefers to go by the name Ilsa. Eddie’s companions include a scarecrow, a robot, and a lion, but the latter is “wearing the torn remnants of what seemed to be a football uniform.” (80) It turns out that the lion, a football receiver, is on the run from fans who haven’t forgiven him for dropping a pass at a critical time.

During one of his brief periods of lucidity, Rofocale warns Eddie that “powerful forces” (88) want to trap Eddie in Oz, permanently. To avoid this fate, Eddie must use his wits to help Dorothy and her companions find their way to the Wizard while navigating the obstacles that crop up along the way…

The story continues on in this vein, with visits to Camelot and other realms of the imagination, as Eddie continues to try to outwit an unseen adversary who Rofocale refers to as the Master of Dreams. Through the entire journey, we are treated to witty dialogue and absurd circumstances. Author Mike Resnick provides the reader with opportunities for both recognition and surprise, as elements of the familiar are intertwined with the bizarre.

Eddie Raven is a likeable protagonist. We learn early on that he is resourceful and clever. Readers can identify with Eddie’s plight on a number of levels. First, he is trying to get reunited with his girlfriend—an understandable motivation. Second, there is the frustration of being told by Rofocale that he ought to know what is going on, when he doesn’t have a clue. It’s easy to root for Eddie as he transitions from a reactive role to a proactive one as he gains some control over his circumstances. Though he is the hero of the story, Eddie is cast in some unheroic roles. For example, in Oz, he is a Munchkin, while in Camelot he is cast as Mordred. This also adds a humorous flair, and puts Eddie in the position of the underdog—another reason for readers to take his side.

Eddie’s girlfriend Lisa, who takes on different names and roles in the different scenarios the duo find themselves plunged into, appears to gain more autonomy for action in the course of the book. In the final chapters, she plays a significant role in helping Eddie outwit his adversary, the Master of Dreams.

The antagonist remains pretty much a mystery throughout the novel. What we do learn is that the Master of Dreams uses material in Eddie’s subconscious to shape the circumstances he finds himself in. Moreover, as we move from scenario to scenario, we have no idea which world of the imagination Eddie and Lisa will be transported to next. The sense of mystery lends a suspenseful tone to the novel, and keeps things moving. But after reaching the final pages, the reader is left still wondering what happened to make Eddie forget the things that Rofocale clearly thinks he ought to remember, and why the Master of Dreams was so set on destroying him in the first place. The Master of Dreams is positioned as Book One in Dreamscape Trilogy, so it’s clear that answers may be forthcoming in future novels. However, as a reader I confess to a degree of disappointment at not having greater resolution at the end of Book One.

That being said, I enjoyed the imaginative and satirical twists on familiar classics. Even a reader with passing familiarity with the books or movies that provide the basis for the different scenarios might still enjoy them. For example, I have never seen Casablanca, but still found the portion of the novel that dealt with a Casablanca-like setting to be entertaining. The Master of Dreams was a fast-moving, dialogue-driven novel, with plenty of laughs along the way. All in all, an entertaining read.
Posted by Djibril at 17:39