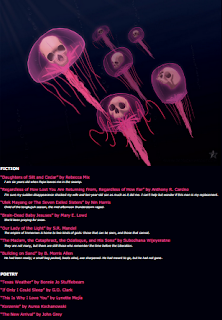 This is a strong collection of well-written, fresh and original fiction and poetry. The only thing that could have improved the reading experience for me would have been a print copy but Kaleidotrope ceased print publication in 2012 and is now only an on-line zine like many others. I still can’t help enjoying the smell and feel of paper, even while I abhor the waste of resources. Visually this edition is a treat with its faintly disturbing artwork in pink and purple by Patrick King, of ghostly jellyfish looming up against a black ground. The same image is used to good effect as a banner at the conclusion of each piece giving a unity to the collection.

Getting down to the fiction, I was struck by the economy and tightness of even the longest pieces in the collection. The authors are telling stories rather than relying on literary effervescence or clever concepts.

‘Daughters of Silt and Cedar’ by Rebecca Mix is a strong opener and definitely one of my favourites. It is long enough to draw the reader in with its strange tale of love and revenge set in a swampy world that beautifully combines the real and the fantastic, human and alien, science and fable. I am loath to introduce spoilers but a brief extract from the opening entices us in: “I am six years old when papa leaves me in the swamp. There is no colour in the sky, as if even the clouds are weary, huddling together to block out the blue.” There are elements of environmental awareness and a powerful sense of cross-cultural exploration running through the story. These themes, environment and culture and how they define our sense of belonging recur time and again in this collection.

‘Regardless of how lost you are returning from, regardless of how far’ is the rather clumsy title of Anthony R. Cardno’s story, concerning a man who slips into a time warp, literally, and spends the rest of his time coping with the emotional consequences of losing his place in time. With family commitments, this proves to have devastating consequences. Cardno succeeds in bringing out the unexpected grief and loss involved in time travel but his description of the alien beings inhabiting the other side of his time warp left me slightly unconvinced.

Nin Harris, however, totally enthralls with her fabulous story, ‘Ulek Mayang or the Seven Exiled Sisters’ which tells of a boatload of fishermen, ensnared by the sisters in a cruel game that turns into a battle of wit and magic between the sisters and a power they had not bargained for. It’s wonderful when a writer delineates a whole vivid and unique range of characters and settings with economic and deft prose, keeping the tension going to the very end and Nin Harris succeeds beautifully.

‘Brain Dead Baby Jesuses’ by Mary E. Lowd has perhaps the most unexpected title. It had me doing a double-take and I won’t attempt to summarise the weird plot and spoil anyone’s entertainment. It is told in a deadpan way and works as a kind of inverted morality-tale. It chimes rather remarkably with the artwork—those ghostly floating jellyfish. Even briefer, but rather lighter in touch is S.R. Mandel’s indefinably lovely ‘Our Lady of the Light’ which is more in the vein of a travelogue (actually she styles herself: S.R. Mandel geographer). There is just enough of a hint of a darker cult, the obverse of Our Lady of the Light, to introduce a note of sinister complexity to this little gem of fantastic literature.

‘The Madam, the Odalisque, the Cataphract and his Son’, Subodhana Wijeratne’s finely crafted piece takes us to a bloody, unsentimental world of lowering resentment and well-deserved comeuppances. It chronicles the moral and physical decay of the titular protagonists and their community. Wijeratne is masterful in his treatment of the flow of history against which the events unfold. The piece has the feel of a reduced novella and therein resides my one objection: the emotional development of the characters is sacrificed to the historical sweep of the whole. It is a wonderful and sensual piece of writing but almost a bit cramped at times. I hope there’s a longer, even more splendid, version in the pipeline. Wijeratne is a clearly a name to watch.

‘Building on Sand’ by B. Morris Allen is much more modest in its scope but nonetheless powerful for its brief but poignant trajectory, describing the life of one man whose family, work-life, dreams and expectations unfold against a background of conflict. His is a world in which humankind battles with an aggressive forest environment. The story describes with tender interest the man’s inner conflict and his slow realization of his life’s purpose. It’s a fine story with which to conclude the fiction element of the collection.

Kaleidotrope’s poetry offering is a strong selection of mainly fantasy-based pieces. They share the zine’s recurring themes: belonging and alienation, love and revenge, gods and demons. Bonnie Jo Stufflebeam’s ‘Texas Weather’ is something of a riddle with its mythical allusions and suggestion of bemoaning. Its evocative imagery seems to defy, rather than invite interpretation. Its cleverness evaded me, I’m afraid. ‘If Only I could Sleep’ by G.O. Clark is a neatly metred exploration of post-apocalyptic insomnia. A man listens to his neighbour’s hammering and reflects on social change with a dark turn.

‘Korzenie’ by Aurea Kochanowski was my favourite of the poems here. It touches with delicate poignancy on the themes of alienation and belonging: “I am itinerant in me / while this body creates as it pleases / and changes without my permission / I am so far apart from my path”. Kochanowski’s language is beautifully evocative of the suffering of cultural alienation and though it speaks of Polish Rroma emigration, its inclusion in this collection of fantastic literature gives it an added dimension. It speaks of otherworldliness in a very tangible way.

John Grey’s ‘The New Arrival’ seems to tread the knife-edge of cliché, counterpoising Disneyesque imagery with a hint of chilling scientific realism. Grey manages this balancing act perfectly with elegantly simple language “In the forest nature’s severely put out / its carbon-base shell-shocked / by DNA that, under a microscope / of foliage and fauna / contradicts its surrounds.”

All in all this is a fine collection of prose and poetry with some stunningly original pieces. Fred Coppersmith is clearly dedicated to the task of marshalling some fine voices in the world of fantastic fiction.
Posted by Djibril at 08:01