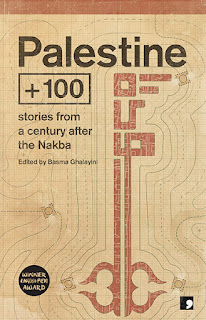 Palestine +100 won a PEN Translates Award. It consists of twelve stories which explore a Palestinian future set one hundred years after the Nakba, the exile of 700,000 Palestinians from their homes in 1948. Written by acclaimed Palestinian authors, who use a number of subgenres to challenge what westerners take for granted in SF. Each story takes you to another reality, and uses what’s right in front of us to do it. I had a feeling the book would be unique. I wasn’t expecting to be blind-sided.

Readers will often consider anthologies a risky purchase, especially ones heading into unfamiliar territories. It might be waste of money, the time taken to invest in the stories could be spent elsewhere. The publisher might be unknown to the reader, making it hard to find a copy. The authors aren’t all established. Anthologies can often be a soapbox for issues. This anthology isn’t political writing set in the future. It’s Science Fiction from a different perspective. It is the sum of the narratives that gives them their weight, so my review is written with that in mind. If there was ever a Science Fiction Anthology that dealt with every excuse not to read it, Palestine +100 is it.

Your engagement with Palestine +100 depends on where you start reading, your awareness of the events in Palestine in 1948 and your ideas of what science fiction is. Your enjoyment does not suffer for having no knowledge of the Palestinian diaspora, of the authors who contributed or even of the west’s expectations of science fiction. To discover some of the depths of this anthology read the introduction and the biographies.

The anthology is edited by Basma Ghalayini who is an established editor and translator of short fiction. Each tale reveals the influences of loss and struggle, the endless traumas faced by generations, in its own way and also their hope. In “N” by Majd Kayyal and translated by Thoraya El-Rayyes, that hope comes at a cost. The story uses isolation and escapism with VR as its device. It delivers a recreated world where people can choose the Palestine they want spend their life in. Ahmed Masoud’s “Application 39” contrasts realistic hopes with rose tinted utopia when Palestine wins the bid for the Olympic Games—something that wouldn’t be possible without cohesion and structure in a society.

While it would have been easy and tropetastic to personify a villain in each of these stories, the Palestine +100 authors do not do that. Instead they take our freedoms and use the devices we love in science fiction to reveal potential futures. There is a privilege in being able to engage with the advances of technology in our lives that goes beyond the monetary value we place on it. Most of us are fortunate to have permanent wiring to plug a device into, the luxury of having a stable connections to stream multiple shows, to own a book that takes you outside the grimdark dystopia of the trend in genre fiction and not have your fears triggered. The superfluity of time to imagine outside our day-to-day essentials allows the ability to plan longterm futures.

The freedom to dream beyond staying in one place for an extended amount of time, of being able to call it home requires a security not afforded to Palestinians. In the editor’s own words, “The cruel present (and the traumatic past) have too firm a grip on Palestinian writers’ imaginations for fanciful ventures into possible future.” It is this axis that enables the fresh sense, as opposed to holding the book back.

In “The Association” by Samir El-Yousef and translated by Raph Cormack, the study of history is outlawed. The story exposes what happens when history is rewritten on mistruths. It is a prime example of how Palestine +100 enables the authors to look at humanity with a different vantage point.

Another of the powerful themes which runs through the book is the unseen enemy that comes from a life of disruption. The reader likely takes a life of security for granted. Nevertheless, Palestine +100 generates a frightening empathy for what the characters face. Anwar Hamed’s “The Key,” translated by Andrew Leber will resonate with parents because of a child’s night terrors. I know what it is to helplessly search a room for the intangible spectre of an inconsolable child. In the story, shadows of the past return to their homes, but these places have new residents. The author entwines the parental instinct to protect with that of the awareness of threat that comes from being Palestinian. Our relationship with hacking and terrorism leads us to see the negative in Emad El-Din Aysha’s “Digital Nation” when a hack on Palestinian software replaces one language with another. Unthinkable, but sometimes thinking outside the box is a positive action.

I haven’t covered all of the stories, not because few stand out, but rather because I want to leave room for your own discovery, because the power of this book and of the individual stories lies in the exploration of them. If I have not yet convinced you to pick up Palestine +100 you can read an extract of “The Curse of the Mud Ball Kid” by Mazen Maarouf on ArabLit.

For all the sorrow and intensity influencing the stories, this is a positive read. You grow as a reader and as a person because of it. Palestine +100 opens doors, with the Palestinian spirit posing uncomfortable questions of its audience. It challenges the genre to go beyond its own identity, its norms and its exceptions, without belittling those that will share shelf and award space with it.
Posted by Djibril at 13:01