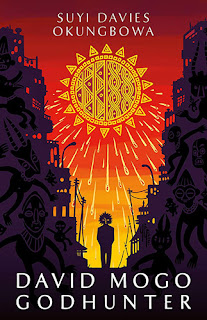 This debut novel by Arizona-based Nigerian author Davies Okungbowa, published as a stand-alone novel by shared-world genre publisher Abbadon Books, falls somewhere between the genres of urban fantasy and self-defined “godpunk.” A fast-paced, entertaining novel that skates past any plot holes or unevenness in characterization, as it moves relentlessly toward its explosive climax—actually, there are at least two or three such climaxes throughout the book. The setting is refreshing, neither exoticising Africa as so many Anglo-American authors might, nor glossing over or apologising for the faults of Lagos as a city (both real and fictional), and like the demigod protagonist David Mogo, the story storms a larger than life rampage through the rollercoaster turns in the plot and cast of characters. The writing is not flawless, and the novel does not escape the clichés of its genre, but it is on balance a good read, and a great introduction to an author we hope to see more scifi or fantasy from in the future.

Our “hero,” the titular David Mogo, is the son of a lost and absent goddess, by an unknown human father, and works as a hunter of minor gods, monsters and godlings that plague the lower part of Lagos since The Falling, when heaven expelled its population and they moved down here, unwelcome but tenacious migrants. Mogo lives with his foster father the wizard Papa Udi, and between his work and Udi’s trade in charms and potions, they can barely keep the roof on their rickety house. There is no glamour in this demigod’s life, unlike the oligarchs and powermongers who have appeared to fill the political vacuum in post-Falling Lagos. As would no doubt be the case in reality—the existence of magic is not the great leveller, but is disproportionately available to the rich and the powerful.

As a book that both sits within the confines and plays with the expectations of urban fantasy to some extent, David Mogo: Godhunter follows certain tropes that are almost obligatory: Mogo is a reluctant hero, at least one female sidekick makes him look like an idiot, the first person narrative is written to emulate spoken language, etc. Sometimes this works better than others: Mogo’s too-cool-for-skool attitude sometimes leads to clangers like, “let’s just say performing a ritual is something only people exquisitely skilled in it should do (or else they could easily end up harming the wrong person, if not themselves)”—where the parenthetical clause pedantically spells out what the colloquial “let’s just say” should have left unspoken. Mogo tries very hard to be the tough-talking, cynical, only-in-it-for-the-payday gun for hire that he plays in the opening pages, but he soon has to admit not only that he cares too much to sit by and watch his city be overrun by an evil wizard or an even more wicked god, but that he himself is in fact the one to do something about it.

The plot, as well as undergoing several jarringly sudden reversals and returns from the dead, relies multiple times on the deus ex machina device; to be fair perhaps one shouldn’t criticise this in a story where a steadily increasing number of characters turn out to be literal gods. Nevertheless, I was becoming so accustomed to familiar devices and scene types that when I first read the name of a venue called “Arena,” I assume the Cage Fight or gladiatorial combat was coming up next (I confess: I was wrong, and for all I know this could have been deliberate misdirection and/or an in-joke for Lagos natives—in which case the joke’s on me!). Indeed, the city of Lagos so viscerally present that it is effectively a character in this story, which must make reading David Mogo, Godhunter a very different experience for a native or resident of the city.

Nitpicks and my own unfamiliarity with the urban fantasy/godpunk genres aside, this is a fun and readable book, not always to be taken entirely seriously, but importantly it is embedded in the politics, culture, mythology and language of Lagos, with no apologies or crutches for the Anglophone reader. As a world-class producer of both cinematic and literary fiction, including speculative fiction, Nigeria is a country to watch for all fans of SF (although attendees of the 2019 Worldcon will have missed that since every Nigerian writer who applied for a visa was let down by the Irish Embassy in Lagos). Davies Okungbowa has published a very promising debut novel in this category, and you should look out for him whether you’re interested in African SF in particular, or just love reading speculative and fantasy adventures in general. This is a proficient and relentless piece of writing that feels much shorter than it is—despite the twists and turns and sometimes violent reversals of fortune, it’s a quick and satisfying read.
Posted by Djibril at 14:41