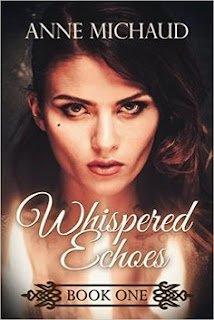 Whispered Echoes by Canadian author Anne Michaud was published in the United States by Sad Ghost Press in late 2015. It’s the first in a YA-series of five books (all published) about ghost seer Alyx. The first book is a dark and thrilling story about Alyx’s escape from the mental institution that has kept her captive for nine years and her way to discover and learn her ghost seer abilities. A fast paced action story, the book is good entertainment and is well worth reading if you like horror, the paranormal genres and young adult stories.

Alone after a fire that destroyed both her family and her home, Alyx has been kept at a mental institution, and told she’s insane. The ghost of her dead sister Katrina still lingers in this world and protects Alyx from harm. But when the staff starts experimenting on the patients and when the patients—her friends—suddenly turn against Alyx, as if possessed, not even Katrina can help her. Alyx manages to escape the place and make her way to Transcend, the mysterious academy where her mother once worked. It turns out that Alyx is a natural talent like her mother and can communicate with ghosts. With new friends and self-confidence, she believes she can battle against the evil lurking at the mental institution and save her friends there.

I have read several of Michaud’s short stories and I have also earlier reviewed her novella collection Girls & Monsters. In my view, Michaud is a talented writer with a fresh and original voice and I was pleased to see that Whispered Echoes is another strong work from her. Even though it is lighter and has a more YA feel than the earlier work I have read, Michaud manages to capture both Alyx’s internal battles and self-discovery and the growing knowledge and horror of the evil at the mental institution.

This is an excellent ghost horror story with all creepy paranormal details and blackened eyes and cackling laughter—which kept me on the edge of my seat—I suspect Michaud had great fun writing it. However, I think that perhaps it is the psychological aspects that is the true strength of this book and even the most compelling part of the plot. The characters are strong and they show depth. The story about the relationship between the two sisters, where one has stayed to protect her living sibling, is touching. But it is particularly Alyx’s development from the insecure girl to the courageous fighter that is most impressive and very exciting to witness. Michaud unveils Alyx’s story nicely through the book and the teenager’s feelings and reactions are realistically described.

I wished the book were a little bit longer. There are some scenes that we run swiftly through. It creates a fast pace but also makes the book lighter than it perhaps could have been if we had stopped and invested some time with a few details: like for instance a few scenes with Alyx and Transcend’s director Xan. The book ends on an exciting note. It feels a little bit abrupt, and I’m left with several unanswered questions. I want to know more about Alyx’s mother, her diaries, and Alyx’s uncle. I want to know more about the gargoyle, about Alyx’s years at the mental institution. I am disappointed, but this is of course an invitation to continue reading the books to find out more and hopefully the loose threads will be picked up during the rest of the five books.

All in all I feel the book is a good start to a series and if you like paranormal stories, strong girls, mysteries and haunting tales, this is worth your time.
Posted by Djibril at 16:00