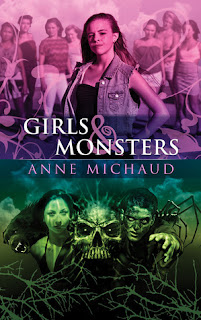 Girls & Monsters by Canada-based author Anne Michaud, is published by Dark Fuse, a small press specializing in horror, thriller, crime, and other suspenseful genres. This is a dark collection of five Young Adult novellas about five young girls who face the monster within, under the bed, in the neighbouring house or while travelling. The book has a broad range of horror plots and you’ll meet classic monsters like the ghost, the mermaid and the scientist, but there are also some surprises. I believe most women readers would identify with at least one or two of the girls, who struggle not only with monsters, but with the typical hazards of growing up as teenage girls. The book is well written and fast-paced, very entertaining and is well worth reading for all ages.

The first story, ‘Death Song’, is told through the eyes of Liz, seventeen, just waiting to get away from her sleepy small hometown by the lake, where tourists go missing every year and float to the surface of the lake a month later. Where the inhabitants either make bets on when the Limnade will feast next time, or deny it all and call it lies and superstitions. Inhabitants who make money on the tourists, who all are wealthy except for Liz and her father, the alcoholic who refuses to adjust to the rules of the town, and who grieves the loss of his wife. The town look at Liz and her father as troublemakers and outsiders. Liz sells ice cream to the tourists, miss her mum, and loves Jo, the Major’s son. When she returns to the town a couple of years later, things have changed. But the mermaid is still there, with plans for her and Jo. It is a brooding mood in this story, slowly built from page to page. I found it an entertaining and dark piece.

‘Black Dog’, the second novella in this collection, is about Scarlet, who travels alone across the Atlantic to London, where she stays at a youth hostel together with youth from the whole world, though mostly with some fellow Americans, especially two girls who adopt her and Eric who fancies her. Scarlet wants to get rid of the voice inside her that tells her to cut herself with razors and who calls her Scars, but at the same time she wants it to stay. She wears a mask on the outside, but has nightmares, is ashamed of her scarred body and so so afraid she is turning insane, like her aunt did. Scarlet sees things, like a ghost dog and statues coming alive. This is a very sad story about a struggle for sanity, a realistic and well written tale about a lost girl, and about the monster within and her combat to accept herself. I liked this story.

The third piece, ‘A Blue Story’, is about Katherine, a strong girl who lives with her younger sister and mother in a slowly dying town. Katherine works as volunteer at the animal shelter, will soon start at college and plans to become a veterinarian. She loves animals and particularly her dog Sweet Sally. Her mother struggles with the finances and Katherine takes a job at the pet store, where the goth boy Matt becomes her boss. Katherine is horrified when she discovers that pets are kidnapped in the town. When her dog disappears too, she becomes devastated. She suspects that her new neighbour has something to do with it, the neighbour who has a mysterious basement. This is a fast-paced and entertaining horror story about a strong girl who loves animals.

‘Dust Bunnies’ is told through the eyes of Chris, sixteen, who has lived with her older sister since their parents died in a car accident. When their grandmother dies, the two sisters travel to Berlin to clean out their grandmother’s apartment. Chris is reluctant to travel and scared, because she remembers the monster in her grandmother’s home, which comes out in the night from under her bed. The treasure under the bed, as her grandmother used to call it. The monster, She, is still there, waiting, but nobody but the neighbours’ boy, her first love, seem to believe Chris. This was a well written, brooding story with a surprising twist. I liked this modern tale about the monster under the bed.

The fifth and the last story in the collection, ‘We Left at Night’, is my favourite story in this collection. It was a surprise, since I usually am no huge fan of zombie stories. We meet Brook and her family; her father who has lost his job, her nurse mother and her little brother. A virus or disease has caused everyone around them to become flesh-eating zombies, and the little family is forced on the run on the road. It is a classical zombie plot, but it is written well with many small details making it very realistic, brooding and frightening. Michaud shows us convincingly the ways of the human psychology in face of the unknown and horrible.

What I will mostly remember from this collection is the way the spectacular monster stories are told with a realistic touch. Michaud writes well about the human psychology and in my opinion this gives the stories that extra creepy factor.

I had no difficulty identifying with the five girls or their different worlds because they are basically ordinary teenage girls. There is nothing either glossy or innocent about them. They quarrel with their parents and siblings. They have boyfriends, have sex and are worried about their bodies. These novellas are Young Adult stories, but I think women readers of all ages will identify with these girls. It is so refreshing to see a book with strong and realistic girls as main protagonists.

Girls need to see that it’s possible to be a heroine and face the monsters, even if you are a normal girl with all the weaknesses and fears—yes, even if you are a lost girl. You can combat the monsters. No need to wait for James Bond to come to your rescue. Michaud has even dedicated the book to the girls: “for every girl who ever faced the monster living under the bed, the creature hiding in the closet or the fiend living within.” In many ways I feel this book is a warm salute to girls.

So the book can be a boost to girls’ self-confidence and it is a good contribution to a more diverse presentation of the teenage girl. If I should point out one weakness of this collection, however, something I don’t like to do since I enjoyed the book so much, it must be that despite the realistic presentation of the girls, there is little diversity in the presentation of them. They are all from the western world, and I think they are all white, straight and from the middle or lower classes. In that way these stories are traditional.

Michaud not only writes well about girls, but also about society. The psychology of the town or the city, the neighbourhood and the suburbs, is used as an important factor in several of the stories: the town that strikes a deal with the monster, the town that is slowly abandoned, the town where the inhabitants become the living dead. To use the surroundings as a major part of the plot is a classical element in the horror genre and Michaud uses this tool very well. Because these are monster stories. They are dark, broody and scary. All in all, I found this collection worth reading, well written and entertaining for readers of all ages, who like scary stories and strong girls. The stories are of good length too, and I found it easy to read a story here and there in a busy everyday schedule. It will be interesting to see how the book will be received more widely.