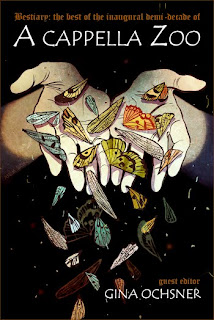 A cappella Zoo is a journal of magic realism and slipstream fiction and poetry, currently edited by Amanda Lyn DiSanto and Lisa McCool-Grime. Founded in 2008, A cappella Zoo has made a bit of a splash with imaginative and evocative stories of the fantastic. The tenth issue, titled Bestiary, is an anthology of the best work from the magazine’s first five years. The defining characteristic of magic realism is the introduction of fantastic elements into a familiar, everyday environment; the story typically draws its energy from the reaction of ordinary characters to a bizarre situation. Often, the overarching mood of the piece is one of yearning—the longing of people in our mundane world for the escape and meaning symbolized by the supernatural, and conversely, the desire of the fanciful character at the center of the story to be “normal”. The guest editor for this issue, Oregon writer Gina Ochsner, talks in her introductory interview about “the primal need for narrative in which the otherworldly, the strange, the supernatural is … allowed to visibly collide with the known ‘real’ world.” Her selections for this special issue demonstrate a variety of aspects of this collision.


One example is Roxane Gay’s ‘Requiem for a Glass Heart’, in which a simple laborer, a strong, good-hearted man with a weakness for overindulgence, meets and marries a woman whose body is composed entirely of glass. He loves her, treats her well, and constantly wonders at her beauty and the view he has of her inner workings—and yet he wearies of the care he must take not to shatter her delicate flesh. For her part, she dearly loves her husband and returns his affection with interest, but still envies his warmth and the strength he presents to the rest of the world. In barely a thousand words, this evocative story presents an intimate portrait of a loving couple forever separated by their essential natures.

In ‘The Creature from the Lake’ by Hayes Moore, a young couple discover a mermaid, or something like it, injured and suffering on the shore. They bring the creature home and nurse it back to health, all the while trying to cope with the wonder in their midst and the effect it has on them. Slowly, as the man’s feelings for the creature deepen, the woman must find a way to accommodate this disruption to the relationship.

Randolph Schmidt’s ‘Larva’, another short-short, presents a small boy with a disturbing compulsion to eat insects, wood, and other things. The story is told from the point of view of his father, whose love for his son leads him into an obsessive desire to understand the impulse. The implication is made that this is simply the son’s way of exploring his environment; the father, desperate to share in his son’s world, is finally driven to extremes he never imagined. In these and many other stories in the collection, the longing to understand the fantastic, to join with it, is explored in a multitude of ways.

Other stories examine different kinds of yearning. For instance, in ‘When the Weather Changes You’, by Amber Sparks, we learn the story of a young woman in the early twentieth century, in a timeline where the Yellowstone supervolcano had just exploded and plunged the world into a deep, years-long winter. Her great-granddaughter tells the tale of how her ancestor, by nature a distant and solitary soul, develops a temporary craving for warmth that forever changes her life.

In Eric Schaller’s ‘The Watchmaker’, we learn of a master watchmaker, a proud craftsman, who takes a commission to build a female automaton. His only desire is to push his great talents to the limit—but the impact of his creation on his community lead him to ruin, and then to even greater achievements. The story explores the consequences of indulging the impulse to create without thought for the possible repercussions.

A longer story, ‘Trouble in Mind’ by Julia A. Rosenthal, deals with the changes wrought on society by a sudden dramatic change in human thought and communication. The “conversion”, as it is called, causes people to begin to think in far richer and more complex ways than before. At the same time, they switch to a dense form of gestural language, speech being too limited to convey the full range of their ideas. The story follows a man whose wife and daughter have made this transition. Despite their best efforts to maintain their family, the distance between the man and his loved ones eventually forces him into a decision about inducing the change in himself.

In these and many other stories in this collection, we observe the interpenetration of the ordinary and the magical. Fantastic events and beings intrude into our ordinary world, or conversely, regular human feelings and desires are carried into realities very different from ours. The common thread is the interaction between the two worlds, and in most cases, the writing and characterization invoke this contrast with empathy and a rich variety of emotion. Despite the diversity of the authors and their subject matter, a general unity of mood and purpose join the stories into a cohesive whole.

In addition to these beautifully written stories, there is also a selection of poetry sprinkled throughout the anthology. This work, while dealing with much the same subject matter, generally works in a more impressionistic style that often evokes a sense of wonder within just a few words. Again, there is a wide variety of approaches, and yet the poems are of a piece with the prose, and serve well as expressive intermissions between the longer works.

Overall, reading Bestiary is a marvelous experience—a journey through a long series of bizarre and beautiful realities that provide a multifaceted examination of the human capacity for wonder. Many of the shortest stories contain ideas enough for entire novels, while even the most minimal poems manage to convey an overwhelming sense of the magical. A cappella Zoo has clearly had a rich and inspiring five years, and it will be exciting to see what it gives us in the future.

Buy Bestiary from Issuu
Buy or view online at A capella Zoo
Posted by Djibril at 12:11