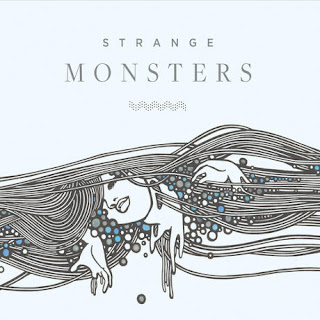 Strange Monsters, where narrative dances along the fringes of normalcy, while bowing deeply towards the magical, the strange. The thrust of the tales comes from female perspective: a cursed ballerina, Rumple Stiltskin’s wife, a devotee of a singular love idol, an older woman remembering past loves and lives and a decidedly lycanthropian love story. The poems speak of finding voice, of rising above confusion, of making one’s own way.

The writing itself is not bad: the conceits used to explore and examine a woman’s opinion on love and collaboration are effectively sparkly enough to give lie to a greater gravitas one feels the authoress wanted to put forward. If a ballerina is not only cursed but a bigger girl, does this mean she remains trapped? In her instance between shape shifting at midnight into a horse (in either form, she never escapes her curvy body, and, indeed, why should a bigger lass be equated to a horse, either literally or metaphorically. Body shaming, it seems, is not new), and the possessiveness of men? The first story begins with a quote attributed to Chekhov about ballerinas stinking like horses in the intervals; basically beneath the light, the glamour, the floaty quality of the dance is real effort, real bodies and real muscle working hard. Chekhov reappears in Shufflebeam’s statement-formatted narrative to report he is the only one to have seen the ballerina beyond midnight, and moreover he celebrates her as an entity—both horse and woman—by “riding” her. The ballerina herself disputes a literal shape shift. Is this, in fact, a woman, taking control over her life, choosing her lovers, and for it being ‘shape shifted’ in the minds of the men around her to explain her away, instead of allowing her her strength?

Mrs Stiltskin stands by her man, refusing to believe that there is any criminal reason for the sudden appearance in the marital bed of a small infant once its mother reports it missing. This on top of the Stilltskin’s home already awash with children not entirely of her making. Instead she blames the loose morals and poor education of the young women in her area, producing children they cannot care for and complaining they cannot spin straw into gold… instead she wants to shower the children with love, as she says their birth parents can not. This time this is woman as mother figure, but as backbiter, too. Showing that instead of supporting ‘inadequate’ fellow women in their lives, she is willing to condemn and place her own behaviour on a better footing. Not exactly feminist stuff.

Skeletons play a big part in the next three tales; directly appearing in the next two, and as a metaphor for the finalisation of relationships in the last. Tale three is one of lovers; a group of friends, bound together by the equal obsession over one of their number; the love idol they have either had or want to have. A camping trip seethes with sexual tension, while skeletons of dead animals wander and swim around the group. Skeletons in the cupboard? Surrounded, perhaps, by untold desires and secrets that are not so secret? In Shufflebeam’s fictional world living skeletons are real; kept as pets, noticed without fear in the woods. If Pullman’s daemons are the other half of a human’s soul, quite possibly the better half, then Shufflebeam’s skeletons are emotional baggage and frustrated libido. This continues into the next tale, when a skeleton turns up on a woman’s doorstep, a picture of—a lost relative? A lost love? Clutched in its bony fingers. His hostess plays tea party with it, recalling her own lost sociability, the skeleton a direct comparison to her emotional landscape and memories. Drifting, slightly mournful, the tale hears like a paean to past times; the lovliness of sentimental nostalgia.

The poems come next, and despite receiving an impression of meaningfulness and a spiritful voice, I have to say they left no great impression on me. I shall return to the biggest problem with the project—as I see it—after the final story.

This last comes in a deliriously colorful series of remembrences (again) from a female voice with a bound connection to her hometown. A meeting with an out-of-towner transforms her world into a blazing curiosity for beyond her limited horizons. Insert what metaphor you wish for such horizons; social situation, schooling, race, gender, etc. Our narrator appears as tied to her hometown as Bigelow’s vampires, and like those toothy rascals, the narrator, if the lurid and slightly trippy style does not let us down, belongs also to a more supranatural set—unless, of course, consuming one’s lover is also a metaphorical construction of dominion. I prefer to be more literal; as the rest of the story is read through the smells-as-colours, sounds-as-feelings level of prismatic detail that dog researchers have suggested elevates canine world experience beyond the human level.

So far, so interesting. The fantastic reality and magic realism of Shufflebeam’s words are amusing vignettes, well written, yes, but with little to anchor them in any serious longevity. They entertain and they pique, but there are few real teeth in them. If these are stories written by a woman, on women’s experiences, with female voices, are they intended as feminist? Or just to make a poetic statement? The thing about statements is; they come and go. Until the next statement.

Now we come to the music—Brewer’s contribution. In and of itself, it’s good; with discordant jazz and mood rhythms, it disturbs a placid listening experience, edgifying it and making it an active effort to hold onto ideas. The whole experience becomes what was wanted: an immersive one. But. The mix is off. Spoken word sounded occluded by the music, and the readers were often too softly spoken, swallowing consonants, which cut off words and made some parts all but unhearable, especially the poems. I have come across some of the writing online, and read it in my own head, minus music. It reads more dramatically than I heard it read, possibly because in reading we make our own conclusions, but the music was the biggest sticking point in this production for me; just basically too loud!

There were some good points in this package, and for the poetically minded, this, I think, would prove of interest as that submersive experience I mentioned above. To be in thrall through more than one sense alone to the vision of the package’s creators is a mildly heady sensation, but I wanted to hear the stories and poems properly, and challenge them in my own mind to my own ideas and filters. For my experience, the music and words would have been better separated, and the readers clearer in their enunciation. It’s only a shame that it didn’t entirely work out.
Posted by Djibril at 16:45