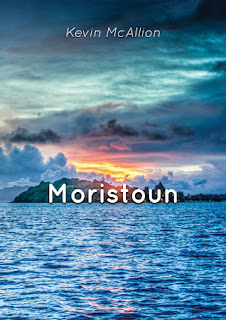 This book is a first for two reasons. It is a first novel by a chap previously most involved in sports journalism, and, as far as I know, the first novel dealing with the afterlife of Scottish suicides. Bear with me, it’s not as dour as it sounds! The titular island, set in an interminable sea and reachable only by a portal from the mainland (unless you arrive by the more conventional and terminal method), is a place where suicides have to learn to move beyond their personal demons and spiritually better themselves before they can leave and ‘move on.’ That is not entirely the end, either, as McAllion adds a little Eastern detail to this purgatorial narrative with hints of what lies afterwards; a cycle of rebirths and lives lived as both animals and humans. Woe betide the unrighteous, though. Should further grave offences be added to one’s CV whilst on the island, then a soul is hell-bound for a more directly punishing purification.

So—a Scottish purgatory for suicides? Sounds pretty dire, especially given the graphical nature of Scottish bleakness at its most pessimistic, aired by numerous Scottish writers (Irvine Walsh gets a name-check), but McAllion tackles it with a humanity and humour that suggests even those lost to despair are not lost to redemption. On the island you ostensibly live as before; the town and surroundings seem normal, if stuck in an earlier era with no TV or phone or Internet, but with jobs, akin to those held while one was alive, pubs, a courtroom and a single cinema that once a week shows highlights of the week’s mortal realm news and a film. This is a place designed for introspection without the distractions of modern living. And then there is the library, wherein dwells The Book; a huge tome of a thing, written in ancient languages and read with a magnifying glass. This is the ultimate test of a soul’s perseverance. For by reading it, one can achieve enlightenment. However, to be considered worthy by the island’s mysterious Council (adjudicators of the residents’ progress) of passing on can take years, decades, even centuries. For reading is one thing; assimilating and using divine knowledge is another.

This is not a religious story, nor one spouting any one particular polemic. Instead, it seems more thought-experiment and creative postulation. Religion—of any sort—is not a saving grace here. Indeed, while religion is often espoused as something to hold onto, come hell or high water, Moristoun is where one has to learn to let go. There is a considerably more mystic and philosophical mood pervading the conditions required to pass through to the next step of the cycle, for one has to let go of fear, resignation and self-centred introspection. Particularly difficult for suicides, perhaps—one has to forgive oneself. So this is a non-denominational and spiritual tale, told in a very human way. Humans have a very basic down-to-earth understanding, based upon their needs and desires. These flawed creatures—how could they work out how to perform a spiritual cleansing? Many of the residents seem, if not happy, then moderately content to continue living as they had before. McAllion puts a good point; how many of us have the strength to pick ourselves up after a bad knock (ok, so being depressed enough to commit suicide is to a ‘bad knock’ what the grand canyon is to the Devil’s Dyke—but the point stands) and move on? McAllion’s story is just that; how can one move on? How can one improve oneself for others and for oneself?

He continues in a cerebral vein—and the importance of opening oneself to the world as a means to prevent a closed and saddened mind—by being dotting his text with philosophical quotations and name-dropping of substantial volumes such as The Unbearable Lightness of Being. McAllion seems keen to show his intellectual and writerly chops, and although the similes may get a little dense in places, the premise is sustained, and charmingly so, with great aplomb. It’s a book that draws you in ands tickles your fancy with gently humorous satire, your heart with characters you come to give a damn about, despite being recognisably flawed (they would not be in their current predicament if they were not), and your mind with a fascinating reimagining of what comes after death. The community on the island is a vibrant one, and if the characters are a little cliché in places, where else would one find the truth of clichés’ overbearing meaning but on an island of personalities that have taken one of the most drastic acts life can provide? But they are not caricatures; the policeman is a sadist and the drunks haunting the pub are sad, embittered, lost and misogynistic, but you never feel a sense of buffoonery from them. More of pity; these are souls trapped in their own darkest moments. Even the island’s true-blue baddie, a gangster dispatched to hell (ironically caught, like Capone, over a matter of tax evasion), is a dark shadow that you know will be overcome, despite his filthy doings. The island needed a villain, and he was it. It is all as if Dostoyevsky was pondering on the events in limbo as re-written by Stella Gibbons.

To mix up his island, McAllion talks us from the present, and public defender Buchan ‘s latest assignment; bringing a potential suicide (McSorely) to the island to change his mind about taking his own life, to the near-past and the origins of the comely barmaid Gail, to the further past and Buchan’s own history. The switches between eras happen quickly, sometimes chapter by chapter, but McAllion holds it together well; the book feels soundly plotted and written with real love. The backstories enrich not only the characters but also the unique and original world that McAllion has created.

If I had one critique based on the definite feelings of annoyance it stirred, it was the editorial and publishing quality let it down. There are just a few too many grammatical errors strewn about, and in relation to the switching of eras from Buchan’s entrance to Moristoun two centuries prior to McSorely’s in the present era. It just leapt off the page: giving George VI as monarch, and a few pages later mentioning Karl Marx as a contemporary of Buchan’s. Marx was long dead before George VI came to the throne, and it would not have been two centuries since George VI, given he ruled 1936-1952. Some tightening up to remove the glitches would have made this seem a more polished effort. Narratively, this gets a sound thumbs-up. Editorially, McAllion needs to have a word with his publishing team!
Posted by Djibril at 16:09

Thanks for your review Kate, very extensive. Wish someone else had flagged up my poor knowledge of the British Royal family before it went to press!