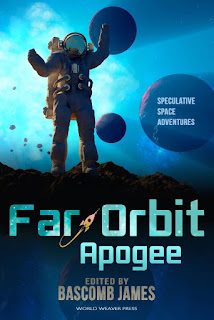 Far Orbit Apogee is the second in a series of anthologies dedicated to space adventures edited by Bascomb James, with two more books slated as forthcoming in 2016. The aim of the series, James explains in the introduction, is dedication to “Grand Tradition storytelling for a modern audience,” with Grand Tradition defined as “a writing and storytelling style popular in mid-century SF publications composed of plot-driven fun-to-read adventure stories with a positive message and a sense of wonder” (5). Reading this volume with a critical eye, I honestly wasn’t sure if this collection was meant to participate in the ongoing schisms in genre fandom personified by the recent Puppygate crisis, or if it was only trying to appeal to new or nostalgic readers. “Grand Tradition” is a known phrase but one seldom used; outside of the occasional brief review blurb, the only other times I’ve seen it used was in a pair of anthologies edited by Gardner Dozois in the 1990s (The Good Old Stuff, containing classic reprints and published in 1998, and The Good New Stuff, a collection containing contemporary writers published in 1999). Nonetheless, James does provide what he aims to deliver: a diverse series of stories.

In the brief introduction to each selection James also includes a short note about the form used (such as juvenile or YA fiction, coming-of-age, mystery, romance, and so forth) and then a biographical note for the author. Sometimes this can be distracting rather than entertaining; for example, attempting to digest juvenile fiction into less than a paragraph overlooks a great deal of genre history by necessity. Further, World Weaver Press is a small, independent press that specializes in genre publications; while the material was utterly professional the ARC I had access to was less so, riddled intermittently with typesetting line issues and the occasional misspelling. There was also a factual error with regards to a citation of H.G. Wells’s The War of the Worlds, claiming that book’s publication date as 1848 rather than 1898. While admittedly these are nitpicks, they are ones that do distract from what is otherwise a solid publication. That said, I was impressed by the range and quality of most of the offerings presented here.

The volume contains thirteen stories, three of which are reprints that have appeared elsewhere in recent years, and one of which, ‘To Defend and Keep From Harm’ by Anne Salonen, is a story’s first appearance in English. James describes it as a paladin story, and while I’m not convinced that that’s a subgenre form, it was a fun adventure story. In contrast, James Van Pelt’s ‘This Story Will Win a Hugo’ is a recursive jaunt that doesn’t wink at the audience so much as backslap them with a familiarity that is uncomfortable and intentions that feel unkind, as a writer character creates an algorithm to study Hugo Award winners to see how they win, and imitate this formula to improve her own craft. That hiccup aside, the remaining stories are solid and entertaining: Jay Werkheiser’s ‘Contamination’ expertly sketches out the conflicts between science and human need, while Nestor M. Delfino’s ‘A Most Exceptional Scholarship’ meshes the hoary old boarding school tropes with alien diplomacy. Dave Creek’s ‘Murder at Tranquility Base’ is a mystery yarn about crime, tourism, and how history is treated in the future.

Julie Frost’s ‘The Affairs of Dragons’ is described as series story, but it is perhaps more accurate to simply call it space opera, as it has a set of heroes that have appeared in other works and will likely appear in others. It involves a familial crew trying to scrape by between jobs and getting caught up in adventures in the meantime; the titular dragons are aliens who are themselves having a familial spat. Kevin R. Pittsinger’s ‘Culture Shock’ interweaves the dueling perspectives of adversaries forced to work together, while Wendy Sparrow’s ‘Lost in Transmutation’ explores similar territory using romance. Dominic Dulley’s ‘Dainty Jane’ is another juvenile adventure story where a teenage protagonist struggles to find her way after personal tragedy, and Milo James Fowler’s ‘Live by the Ten, Die by the Gun’ is space western right down to the cantankerous old Sheriff dealing with cattle rustlers.

My own favorite stories in the collection were Jennifer Campbell-Hicks’s ‘Masks,’ a “court intrigue” story in which, non-surprisingly, no one is who they seem to be, and yet, Hicks has a definite skill in pulling back layers to explore various characters, and Eric Del Carlo’s ‘N31ghb0rs,’ a robot story that favorably recalls Isaac Asimov’s yarns. The final story, Sam S. Kepfield’s ‘By the Shores of a Martian Sea’ is a story about terraforming, and will probably speak even more strongly to readers as we go forward with Martian explorations in real life.

This volume was a fun collection, and I quite enjoyed it, but I still remain bothered by the claims to return to “Grand Tradition” storytelling as a superior form of reading and writing. I read a lot, and not just for TFF-Reviews, and find that the schisms that have racked genre fandom in recent years and that claim a “return to form” lack any real awareness of SFF’s actual history. SFF has always had fun stories, and thoughtful stories, and stories meant to make political statements in times of crisis: it was true in 1906, in 1926, in 1936, in 1966, in 1986, and yes, even 2006 and, undoubtedly, 2016. That’s why SFF remains the true literature of ideas—it is where we can explore most openly the issues that preoccupy us in the everyday. As we change, the genre changes, but that’s true in all art forms. To claim otherwise is a nostalgia that ignores more than it champions.
Posted by Djibril at 15:50

Hi, Cait. Ouch. But thanks for reviewing the anthology. The more attention paid to short fiction, the better, as far as I'm concerned.

Updated to note that the reviewer received an uncorrected ARC rather than the final, proofread version of the book.