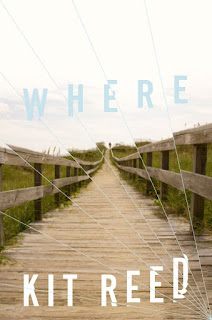 By eighty-three-year-old Kit Reed, prolific author of fantasy, speculative fiction, and psychological thrillers, Where is a page-turner! It is set on Kraven, an island off the coast of South Carolina. Close-knit and backward-looking, Kraven residents glorify their antebellum Southern heritage, passing down to their children cherished Civil War photos and heirlooms. An enigmatic developer, Rawson Steele, appears, charming some residents and alienating others with promises of “new buildings and renovations” (11). Shortly after Steele’s arrival, Kraven residents wake up to find themselves in “Anywhen”: “a square of gleaming, featureless buildings in a dead desert town where nothing grows” (38). Though the layout of streets and houses is identical to Kraven, the islanders’ habitats have been stripped of color and personal possessions. In the plaza, a giant TV streams newsreels of Kraven, now deserted except for search parties. Without any clue to their whereabouts, most stunned islanders remain in their assigned quarters, unwilling to brave scorching hot days and dangerously cold nights. Every morning, dumbwaiters supply each household with food (never described) and fresh scrubs to wear.

For most of the novel, Davy, increasingly frantic, searches Kraven for Merrill. On the morning of the mass disappearance, Steele had scheduled a 4:30 a.m. meeting in Charleston, stranding Davy on the mainland. Determined to find the woman he deeply loves, Davy borrows a boat from his boyhood friend, Earle Pinckney, and surreptitiously lands on Kraven, though the island is closed to any but deputized searchers. Insanely jealous of Steele, whom he had observed visiting Merrill the night before the disappearance, Davy believes the outsider somehow made his neighbors vanish. In his furious insistence that the islanders’ removal must have a rational cause (“Everything happens for a reason!” 195), Davy alienates Earle, who contends: “There are things we know and things we’ll never know, get used to it” (196).

While Davy searches the deserted island, Merrill and town leader Ray Powell explore their parallel reality. Meeting secretly at night, Merrill and Ray seek answers and an escape route. Rawson Steele, to whom Merrill is inexplicably drawn, is also in Anywhen. During one nighttime exploration, Merrill and Ray find Steele’s broken cell phone repeating a fragmentary message: “Expected more from you; Waiting for your…” (127-28).

Visiting Merrill that night to retrieve his phone, Steele tells her that he is (impossibly) Archibald Rawson Rivard, the dashing Civil War soldier depicted with Merrill’s great-great-grandfather, Hampton Poulnot, in a cherished family photograph. Steele/Rivard does not—or cannot—explain why he is able to move about more freely than the islanders nor why he receives phone messages from their captors. Merrill and Steele are, mysteriously, drugged and moved to a warehouse, stuffed with personal effects from people who have disappeared throughout history: “suitcases from Treblinka and Manzanar, the clothes and belongings left behind by the Vikings who vanished in Greenland, the missing settlers of Roanoke, passengers on drowned ships, the lost tribe of Israel and all the other lost colonies represented here” (187). While the warehouse’s contents suggest Anywhen is a holding area for persons who, throughout history, have unaccountably disappeared, the reader learns nothing about previous residents nor about Anywhen’s stage-managers.

Merrill’s adolescent brother, Ned, is, illogically, the only child in Anywhen, though his classmates would have been home when their parents disappeared. In Anywhen, Ned and his father, Hampton Calhoun Poulnot IV, an alcoholic former judge, live together in a facsimile of their Kraven house. Before the removal, Ned was so immersed in a multi-player video game, Gaijin Samurai, that he feigned illness so that school would not interfere with his online adventures. Ned is doubly displaced: from his life as a schoolboy and from his Gaijin Samurai avatar, Hydra Destroyer. Though he feels incomplete without his computer, Ned is actually better adapted to Anywhen than the adult islanders because it resembles a video game: “totally fake full moon … rows of Monopoly-board houses … checkerboard spots where blinding streetlights mark off squares of night” (113). Unintimidated by his father’s penchant for violence, Ned is wryly funny, self-mocking, and street-smart.

Hampton Calhoun Poulnot IV, like Ray Powell, yearns for an imaginary antebellum past. Poulnot had so terrorized his wife that she fled, leaving two small children. When Ray Powell is murdered in Anywhen, Poulnot (probably the murderer) incites his neighbors to lynch the outsider, Steele. At this point, without explanation, all the islanders reappear on Kraven. Where’s abrupt, I-woke-up-and-found-it-was-all-a-dream conclusion confirms Earle’s view that laws governing human experience are both irrational and unknowable.

In her “Author’s Note,” Reed explains that Where is an allegory about “the missing” who “never die.” The Kraven islanders are “like all lost colonies, like all those lost servicemen, like every loved one who vanished without a trace to prove otherwise, They’re still out there” (236). Appended to Where is Reed’s short story, “Military Secrets,” an earlier piece on the same theme. When her soldier father is declared Missing in Action, a little girl joins the children of other missing soldiers, riding on a bus with darkened windows. In this timeless limbo, children from wars throughout history do not age.

Where turns on the unexplained removal and return of a whole community, seen from the points of view of displaced Kraven islanders and of the two residents left behind. (While searching Kraven, Davy finds Boogie, a brain-damaged man, who tells him that the other islanders “was raptured up,” 137). The novel also features various other kinds of disappearances and displacements, some literal, others psychological or metaphoric. Ned and Merrill’s mother vanished, careful to leave no trace of her present whereabouts. Kara Maxwell, another islander, compares the removal of the Kraven community to the disappearance of her soldier husband in Syria: “They quit, but you don’t. He’s still out there somewhere, they just can’t find him is all” (63). Plucked from the world of Gaijin Samurai, Ned has lost his true identity: “I, Hydra Destroyer, got sucked out of my avatar like a soul out of its skin” (45). Even before Rawson Steele/Archie Rivard became an immortal wanderer, his identity had been erased: Archie was the illegitimate son of a Southern aristocrat who denied he existed.

It is not an accident that a novel about persons displaced from familiar surroundings and identities is set in the Deep South. During the Civil War, the ancestors of the Kraven islanders lost loved ones, property, and prestige. (There are no Black characters: the slaves who labored on the plantations have been forgotten by the plantation owners’ twenty-first century descendants.) The Kraven islanders yearn for a way of life they never personally experienced. As an architect, Davy is obsessed with restoring Kraven’s “decaying houses and ramshackle shanties” to pre-Civil War splendor. Ray, whose family plantation once encompassed most of Kraven, lives in the immaculately restored plantation house. Though his prize-winning Palomino died ten years ago, Ray meticulously preserves his horse-trailer as a shrine. Even before their removal to Anywhen, the Ribaults, Powells, and Poulnots were struggling to maintain a hereditary family identity in an indifferent world.

While Ray exerts patriarchal authority for the good of the Kraven community, Poulnot, also descended from plantation aristocracy, abuses anyone less powerful than he. Fantasizing about a past when “we Poulnots ruled on Kraven island” (118), Poulnot considers himself a second Moses. When he incites the mob to lynch Steele, Poulnot is emblematic of those post-Civil War white Southern males who terrorized anyone perceived as an outsider. In differing ways, Davy, Ray, and Poulnot each cling to an outmoded sense of entitlement. Each considers himself the hero of a story of his own devising; but when reality intrudes, self-devised fictions no longer make sense. The removal of the Kraven islanders to Anywhen is a metaphor for post-Civil War Southerners, thrust into a reality governed by alien and incomprehensible laws.

In conclusion, I recommend Where for its rich subtext, though its failure to tie up multiple loose ends did leave me feeling a little cheated. In its blatant refusal to resolve mysteries, Where is a critique of fictional reality. Real life, Reed suggests, does not progress from beginning to middle to artificial resolution. Human experience is untidy, its mysteries often unfathomable.
Posted by Djibril at 15:50