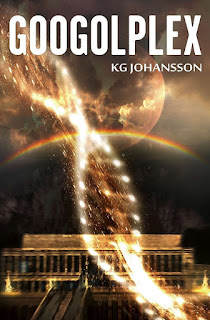 Set centuries in the future, the world as we know it finally destroyed itself through the heavy consumption of fossil-fuel-driven economies. Mankind reverted to a primitive state, then, helped by mysterious disembodied beings, awakened to the powers of the mind, learning how to literally think changes to themselves and their environment into existence. Jack, the novel’s hero, has been alive since the final days of industrial modernity; first learning to heal and refresh his original body, then growing new bodies from his genetic material to transfer his mind into. And yet, in several centuries of existence, a single dogged compulsion from his impressionable early adulthood has driven him onward. The story begins on an alien world that his current life has brought him to as a colonist, and it follows Jack as he senses a mental itch he cannot scratch; a dissatisfaction he has to return to Earth to solve. Through the honing of his mental prowess, he learns to navigate among the googolplex of multiverses beyond our own to continue his mission: to find the perfect soul mate he believed he found back when he was a callow youth.

The canvas is huge; Johansson wisely keeps the focus sharp. Throughout his description of the rebirth of mankind and the entering of humanity into what sounds a golden age of peaceful exploration and scientific achievement in the ‘clean’ technologies of mental manipulation and organic bio-engineering, Jack is our nucleus of events. The story is his story, the questions are his; and very human questions they are, too. In a future where one could change just about anything about oneself and in one’s vicinity to get what one wanted (exchanges are by barter; money is obsolete), and given the googolplex of chances in life, and therefore the likelihood that versions of Jack have made every variant of every choice he has ever faced, whether, in such a quantum state, there is such a thing as free will and individuality.

Free will and individuality. And in the end: whether we are as special and unique as we think. The place of the human in the much bigger picture is a trope often discussed in speculative fiction. The examination of the self and the nature of the individual as it struggles in a certain set of conditions, when well-written is one of the philosophical and intellectual joys of speculative fiction, and where the fluidity of the genre proves one of the best grounds to site such thought experiments and discussions. The trope may be familiar; the mildly threatening presence of higher beings at the end of the tale, who want Jack to comply with their plans in order to achieve their own goals and never mind Jack’s feelings on the matter, are also a very familiar image to readers of the genre. But Johansson, having presented us with this beautiful world, having presented, with those beings, the chance for an ultimate and divine state of grace, still wants to factor in the human element. Jack, travelling through hundreds of possible multiverses, also comes to realise what is the fundamental particle of human-ness, which many may ignore: happy to comply either knowingly or unknowingly with forces that rule their lives. But which (and I wonder if this has not something to do with a certain traditional Scandinavian sense of independence!)—that one particle represented in, perhaps, just one person, the true individual—comes down to this: the grit in the shoe, the one small mis-firing cog in the machine. To be an individual has become a hackneyed thing. Used extensively by advertising and social media, ‘be who you are’ is a mantra now of the masses, all being terribly individual—by subscribing to whatever is being sold to them with that exhortation.

Johansson’s individual, Jack’s situation, is the tiny voice that says “no.” The stubborn non-complier. The dangerous, uncontrolled unit that could infect other units with its refusal. This is not a political novel, unless one counts a metaphor for commercial and political entities in those ‘higher beings.’ But the sense of taking one’s own destiny in one’s hands and accepting responsibility for the choice—for this, too, is important—is the real individuality that we have left. Even if it spoils someone’s or some-being’s plans, if we choose it, if we stand by it, then we are, indeed, even in googolplexes of possibilities, our own selves. Some of the big names of science fiction; Star Trek, Dr Who, Isaac Asimov and Philip K. Dick, have discussed what makes the individual and what makes the human. And it is this same ‘perfect imperfection’, this dogged insistence on being contrary, this grit in the shoe of the universe, which is celebrated as being human.

What makes Johansson’s fiction so enjoyable is the style of the thing. The prose is elegant and sparse, matching the dream-like, glowing future presented. The action from Jack’s present on the colony and taken to his past in flashback, then forward from his return to Earth and into his quest, covers a long period of time, yet we are always in the present with him. Denying us any extraneous and cluttering detail about ‘the future’, we experience what Jack experiences, related to his single-minded quest and not a lot more. We ride on Jack’s shoulder, in his mind, even, but we are not privy to his every thought. This hones and sharpens the narrative into a purer ‘discussion’ about the points of development that Jack makes along the way. The book, written in chapters, is yet fragmented into paragraphs of varying length. This structure would normally create a sense of increasing hurry and speed in the reading of it, but instead it helps in creating an almost drifting, fragmentary sense of witnessing, contributing to the paring down of external detail to the central thrust of the narrative. Reading it, I sincerely felt I was on a quest as well; that the conclusions Johansson makes through Jack’s experiences, are points towards a goal in a thought experiment that I am being encouraged to map onto my own life and experiences. And this is the thing: that contrary human nature. Jack is aiming for his prize. For him, it is the finding and keeping of his heart’s desire. For many in meditative contemplation, this would be Enlightenment. But when Enlightenment beckons; and the chance to be at true peace; one of countless versions which, all together, form a sea of realised total experience and thus contentment, Jack chooses not to have it. This human man finds the journey far more important than the goal; the ‘rush’ of the quest far more appealing than peace, which comes to mean a nothingness.

Johansson’s final words on the matter, “that the only peace was in the search for peace,” sum up beautifully all that he has considered to be intrinsically human, intrinsically individual, and intrinsic to continuation over entropy. The journey really is more important than the goal, even if we have been kidding ourselves that we truly want the goal. For beyond it, what is there? Being individual is to make an active choice on one’s existence, to deny entropy. Thus, the journey.

I emerged from the book with a soft and sated ‘wow.’ It is a thing of intellectual beauty. Not easy to slide into, but once in, once ‘clicked,’ it is a deeply satisfying and fascinating read.
Posted by Djibril at 15:46