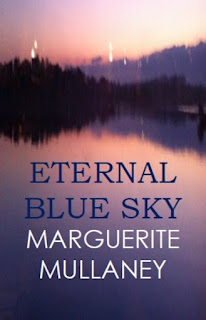 Eternal Blue Sky is an indie-published historical adventure/fantasy novel involving slightly far-fetched technology and time travel to the crucial period of Mongolian history. The land and skies of Mongolia are almost a character in themselves, which is just as well since most of the human characters range between unsympathetic and downright repugnant; it really is a strikingly unromantic view of the exotic past. Despite some writing flaws and slightly grating cultural appropriation, and the fact that many of the basic elements of this book were not really my cup of tea (it is an historical fantasy adventure/thriller with an ostensibly science fictional setting, rather than fiction about the science or even social themes), the premise itself is interesting, and the adventure at times exciting and gripping.

The writing in this novel is sometimes clunky (I’ll not dwell on the many typographical and formatting errors as I read an ARC and will assume those were fixed for publication). The first chapter opens with a cheap pun on one character’s name that takes several paragraphs to become clear, at which point (if the reader bothers to look back to make sense of it) it feels like the character was named purely for a shallow nomen est omen. Another character is, on the first page, alternately named by his first name (“Wyatt”) and his surname (“Ramsey”), making it hard to follow for a while whether he’s one person or two. Later, this same character, now revealed to be an inveterate asshole with no apparent redeeming features, makes a particularly skeevy remark, and the narrative explains, “Wyatt found it second nature to turn on the charm.” Really? Not all problems with the writing are technical: to cite the most egregious example (CONTENT WARNING) at one point in the novel an on-screen rape scene is presented entirely from the point of view of the male friends of the victim, dwelling on their agony at not being able to rescue her. Although the character later gains agency over her own survival and recovery, the presentation of the assault principally as a source of shame for the men present is pretty revolting.

There are three major viewpoint characters in this novel, although the narrative sometimes head hops dizzily to other, minor characters where necessary for some plot disclosure. The protagonist is Ryder (geddit, “Ryder”/“rider”, a Mongol horseman?), a twenty-seven year old American woman, who was a nuclear physicist until five years ago when she almost died in the Mongolian steppes, and has since become the respected leader of a clan of warriors. This “white saviour” who magically is better at being a Mongol rider than people who were born into the saddle is a little hard to swallow, but it’s a common enough motif in historical fantasy, of course. Ryder is a former lover of the aforementioned asshole Ramsey (who, despite this intimacy, seem to refer to each other by surname throughout), betrayed by him in a way she will never forgive. Despite this, and despite his continuing duplicity and disrespect, she becomes increasingly ambivalent toward him as the story proceeds, taking the tone of a romance trope whereby the corporate scumbag is a desirable alpha male (although Ramsey is far from “alpha” in any environment). Ramsey is not the only thoroughly unpleasant character among the Westerners in the story: his whole team indulge in abusive language, which I presume is meant to make them look tough (and make us all the more surprised when we find out we’ve made incorrect assumptions about them), but as their language includes constant, graphic racial abuse, they’re pretty irredeemable even when one turns out to be (for example) not an illiterate driver but a consultant science genius.

The plot of the story revolves around a convoluted time-travel disaster, which all the main characters are somehow implicated in and begins with one of the amazing coincidences that all time travel stories need: characters travel through a gate to an unknown time period “some time between the fifth and fifteenth century” and in the whole of Mongolia one of the first characters they meet is a young Genghis Khan. Of course. From then forward, however, the plot becomes less predictable, and reader expectations are played with as the matter of parallel realities come into the story, and the reality the characters find themselves in takes an increasingly weird, and sinister, twist.

Aside from the rather troubling matter of the cultural appropriation (a story set in Mongolia with mostly Western/Western-educated characters and author), and the constant feeling that the story wants to become a romance novel—which fortunately it never does—this is a cleverly written book with a fast-paced, original and unexpected story. There are elements of grimdark in Mullaney’s refusal to pull punches at scenes of torture, sexual violence and warfare, and more than one major twist in events that really do change everything you thought you were reading. While I can’t say I wholeheartedly enjoyed it, for reasons as much my own fault as the book’s, Eternal Blue Sky does deliver what it sets out to achieve, and does so well.
Posted by Djibril at 15:59

Should western authors only write about western culture?