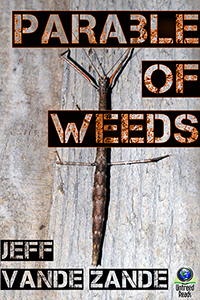 Dystopian futures featuring heavy-handed systems of social control are not new in speculative fiction, and a natural response to the very real examples of dictatorship that history and current events provide us with. Zande’s vision is one that feels chillingly possible: not so much control by politics as control by commercial, consumerist programming. The implication is that the corporations have, indeed, taken over. Pockets of Stepford Wives-style ‘perfect’ suburbia locked behind walled enclosures, blinding even the ears and nose from distastefulness by piping in music and manufactured scents, dot a world that is slowly falling into ecological ruin and social stagnation and decay. This is consumption taken to its furthest conclusion.

Hand-held media units have developed into implants within the hand, and to these the world seems addicted, numbing any sense of direct action and isolating individuals from each other. By dividing, the corporations have conquered the masses, opiating them with electrical input and the lie of ‘social’ networking. Such is the increased paranoia of interaction with unknown others, that even the friendly offer of help to a fallen fellow passenger on a tram sees Ian being threatened by the same old lady with a can of mace. Ian’s personal ID is held in a swipe-able ID strip under the skin, allowing for tracking and identification—the ultimate ‘Big Brother’ technology, and a variant of a consistent trope in futuristic narratives. Of course, these technologies only apply to the higher-end of society. Ian’s trip to the tower-block-living underbelly of the wider world sees him mingling with people whose hand-helds are still separate, discrete units, and who have to input personal codes manually into systems. Status is clearly predicated on whether you have the latest model.

Zande’s warning is the danger of subtly programming chosen norms of living within a populace to produce a society that will self-regulate along the lines required of it by its unseen controllers: Ian’s son plays a computer game that underscores the idea of the poor and dispossessed outside the walls of his commune as being wild and inhuman. And so such a society will ostracise, almost instinctively, those who do not ‘fit.’ This is typified in miniature by the homeowners’ council within the commune.

It is Ian’s destiny to break out of this social ‘code.’ The story commences with the meeting of a fellow traveller in the mid-class seats of a red-eye flight. Forced out of his shell by her gentle insistence on talking to relieve her flight nervousness, he is strangely affected by her humanity. Her declaration that his current project (aiming to market post-divorce goods to men who are not yet divorced, but who are showing all the significant markers of such) is morally wrong is the seed to challenge his thinking—the ‘weed’ of doubt as per the title. Upon disembarkation, he finds her locket containing an image of her beloved daughter, and he decides to personally seek her out in the poor end of town—a place redolent with menace, power failures, cheap food and frightened families living behind heavily locked doors. Ian has stepped beyond the boarders of his own circle.

As the story develops, it is not only his physical location, but Ian’s psychological and emotional life that undergoes revision. He is forced to confront what he always suspected: that he was a man of two inner lives. The suppressed, emotional, humane side overwritten by the efficient selling machine of his corporate self; an over-writing necessary to make his way in the world, and find a safe, comfortable home for his only child after he is left alone by his wife’s death. Ian is a product of the system: the rewriting of humanity’s nature. Where he is different is that he can see the cracks in between, and then he widens them.

You cannot deny the strong 1984 overtones: an individual bucks the system, and is punished for it. So much so, Zande has effectively re-written 1984 for the current era, warning not of political authoritarianism, but conglomerate. He directs his admonition through the awakening of a single, simple man; an apparent willing part of the System. Even speech is removed being an external event. Having no discreet punctuation to remove it from the main narrative of Ian’s thinking, it becomes part of the growing state of mind of the central character, as if it came from elements of his own psyche in a self-created world of questions and discovered answers that is there to help Ian, and through him, the reader, to learn. Is our reality truly just something we create for ourselves? Or is it made for us, with our complicity?

Consumerism is the new King of the World, but in common with any extraordinary state, we ordinary beings can be crushed under its weight, and become slaves to its greed. Unlike poor Winston in 1984, this time the woken man escapes; but into a world that is rough, difficult and utterly unforgiving of the vagrant and the poor, and only by “denying thy house and refuse[ing] thy name.” Ian has to literally leave behind all he had, including his son (who is fast becoming an ideal youth of the wealthy elite)—and even has to physically cut his ID strip and hand unit out of his flesh, in order to find true freedom. But he faces a horrendously uncertain future—the symbol of his actions being the mother of all storms that is crashing into life as he escapes over the commune wall: a wall that is both, of course, physical and also mentally metaphorical, separating as it does past and future, life and death, control and freedom. The world is exploding into passionate, natural turbulence, and will Ian weather the storm or become the next starving beggar on that side of the wall for another home-owner to spy out through an accidental hole in the brickwork, as he did to ‘his’ beggar? It is possibly simply the continuance of a bitter circle; a neighbour of his who showed signs of individualism was also ‘removed’ from the commune—is Ian simply the next one to do so? Is he caught, perhaps, in a Foucaultsian ‘allowed’ deviance; allowed because it is ultimately, by the nature of its birth and form, still controlled by the forces he seeks to escape? The thought is creepy: after all he’s done, and still not out of it?

Faced in his bedroom by the black-clad leader of forces who have finally come to take him away, Ian learns more about how close the control over his life goes. It is revealed that he is a sort of experiment by the authorities of nature vs. nurture. Ian’s own ‘bohemian’ parents were too unacceptably free-thinking, truly individual types in the eyes of society’s masters. Their early deaths (possibly a sinister event?) left Ian a ward of state, free to be paid for through university, and onto permitted lines of work and life. However, having shown himself to be a natural degenerate, he has become a mistake to be eradicated. It is precisely only Ian’s human ‘unpredictability’ that allows him to escape. By reversed example, the reader should cherish this instability as a true humanity in the face of oppressive determination.

This is a tightly packaged narrative, with not a wasted word. The most perfect summation is in the title: A Parable of Weeds. The idea seems to be that this is the praising of the underdog element. That is; the vivid, the visceral and the real. The ‘undesirable’ will always find a way to grow through. And yet, with magnificent, caustically humorous irony, it is these ‘weeds’ of humanity and emotion that the reader is encouraged to think of as natural, as in comparison to the ‘wrongness’ of hot-housed oppression. Beware of an era where fundamental human-ness becomes ‘undesirable.’

It may be short, but it is compact with layers and layers of meaning and philosophical and social questions. The thrust of Zande’s main theme is clear, yet never feels heavy-handed in its approach. As a modern parable—a story that teaches by example—it is nothing short of a brilliant gem of a book.

Buy this book from Untreed Reads
Posted by Djibril at 18:15

Thanks so much for the wonderful and thorough review!