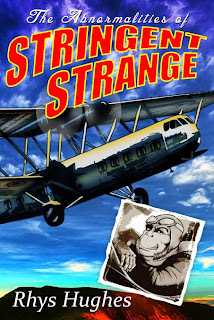 Contemplating a book by Rhys Hughes is to dive into a welter of comic styling and narrative explosion that fiercely interrogates the very fundamentals of the relationship between reader and text. He highlights via the weird and the profane the odder elements of expectation through the illuminating nonsense of his books. Although written some years ago and lately published, the novel continues the structural fascination he displays in his short stories. The cliff-hanger tie-up of each chapter renders each a mini short story in format, and the whole romps along at a tremendous pace. Frankly, this is a book that is utterly bonkers. No two ways about it. Robert Rankin has self-styled himself the ‘Master of Far-Fetched Fiction’. This novel, full of zip, pow, bang, sex and violence, weighs heavily in Hughes’s favour of snatching that crown.

Hughes’s trademarks are intertextual self-referencing and meta-textual shenanigans. Jump on board a galloping Hughesian narrative, and that faint, broken line in the dust miles behind you is the shattered remains of the fourth wall. Hughes’s characters reference each other as fictional, address the reader directly and generally shove hard against the boundaries of ordinary, decent narrative until the seams crack. To add an even greater level of inter-outer-ness, Hughes was involved in an auction to raise monies for animal charities, and inserts an entire chapter on gladiatorial combat between the fictional versions of the highest bidders and their chosen writerly opponents. The gore factor alone is astonishing. And the reader can choose to read this chapter, or skip it entirely. (I would recommend reading it, it is deliciously mind-bending).

The primary genre is a homage/satire of pulp fiction. Specifically, the science fiction mash-ups of the 1930s, featuring flamboyant technologies, heroic characters and visceral thrills. Typically, a strong male hero falls through a technical contrivance into futuristic adventures, overcoming them with his healthy, old-fashioned chutzpah. Hughes’s spin is to reverse this situation a little and to reveal the whole shebang as both ludicrous and highly readable. His characters may be in extremis (cyborgs, hippies, saurians, god-like beings, supernaturals, cult nutters, etc), but that’s the whole point. The intertextual knowingness sits very naturally within the inherent daft enjoyability of pulp, and by making this homage self-aware of its genre faults, and taking them to their most logical conclusion, celebrates all that is B Movie, Late-Nite, and Double-Feature about it. Stringent is the hero, but he is an over-sexed, somewhat credulous monkey-man. He is no clean-cut champion. For the intellectual side—those who put the pieces together to move the plot along—are not only the ‘scientist’ stock character of pulp (in this case, Crinkle, but perverted into a cyborgs brain in a mobile jar), but also two of the female characters—showing that women have value, too, and not just as new-age, sexually liberated hippies. Naturally, this is a deliberate reversal of the female roles in many misogynistic B movies and pulp fictions.

Women were the screamers, the need-to-be-rescued love interests or the femme fatale and lethal to the well-being of the male protagonist. Tantra and Nutloaf are fighters, thinkers and guiders. They help to protect Stringent, further his quest and he gets nowhere with them sexually, as he is unable to fulfil his prostitution kink with women who live a free-love life. Hughes’s male characters lack the best of humanity. Stringent is morally questionable, with odd perversions; his ‘abnormalities’, finally, anticlimactically, revealed by Crinkle, are just a few odd physical quirks. Crinkle is selfish, over-intellectualised and becomes steadily more unbalanced due to a brain injury. The male HIPZIs are overly pacifist, weeping, weed-smoking, credulous and frankly wet. All the ‘baddies’ are male: greedy, power-mad or just plain mad. Yet it is still a man’s world: the girls can fight and think, but the action is driven by the men, and it is the male hippies who manage to convert a colony of old-fashioned, full-bloodied fascists into HIPZIs to start a new Utopia after losing their old home.

The biggest joke is on the reader’s expectation: take nothing for granted with Hughes! The title of the book is a red herring, giving huge import to the hero and his potential amazingness, when he’s basically a strange mutant hybrid: normally a supporting role or a figure beyond the pale of the ‘goodies.’ But it is better than, say, ‘Some Stuff That Happens to Stringent Strange’! After all, the title has to be DRAMATIC, because pulp fiction is excess. No more is this better exemplified by the use of exciting highs of action at the end of each chapter. The trick is to make the reader want to keep reading. It’s a bit corny, but pulp is corny, too. Hughes delivers in spades, whilst keeping an eye to his surreal interjections, and a firm hand on the reins. Never did it feel as if the book was running away with itself and losing momentum and internal coherence by doing so. The very real authorial quality is apparent in this; and presents a paradox. In order to break authorial dominance; to give life beyond the narrative to his characters and structure, Hughes has to exert some pretty tight editorial control.

The format for pulp adventures is not complex: action, new location, new clues, more action, new location, etc: a paradigm that Classic Cinema has used to popular effect for a very long time. But with engaging extra details and colour, there is no skimping on the connective passages here, either, giving them as much vibrancy as the kidnapping, escaping and fighting that dominate the book. The sky-battle between Stringent and the (humorously steam-punk-esque) defences of the ‘proto-Nazis’’ zeppelins is a breathless sequence of loops and dives, explosive charges and derring-do. Stringent recharges himself after his flight to the future by exposition in the charmingly new-age camp of the HIPZIs. Then more movement by fast cable car to the HIPZI capital, exposition from the leader of the HIPZIs (and a reunion for Stringent), then a battling escape from a batch of werewolves as they attack the HIPZIs, and into another plane for a flight to a possible ally… linked by the fluidity of flight (Stringent’s ‘hero function’ element), and utilising its ability to literally cover ground quickly, the book garners pace and enthusiasm, winding up the ‘what the f?!’ factor as the point of the whole exercise becomes ever more preposterous—the stopping of some deadly god-like being from taking over the world. There’s fun in Hughes’s undermining the stock prepositions of genre expectations. The werewolves are the poseurs, always wanting to look fabulous. The zombies are academics who feed off ideas—the result of having brains! The dinosaur aliens wear turbans and fezes and communicate by telepathy—hardly roaring, rampaging beasts. And then there are the highly detailed aeroplane descriptions: boys’ own adventures always had scrupulous detail about technical parts to act as an ‘educative’ element. As one character clues us in, the descriptions are very detailed because the author wants to show off his research. Reading the book one receives many different jokes and nods on many levels (my favourite is the imaginative ‘alternative’ insertion of a certain giant of sci-fi writing). Fans of speculative fiction in all its media forms will find plenty to yurk about.

Naturally, this is an ‘alternative’ history narrative; the narrative leeway for strange and odd. The Nazis won the war using arcanely inspired technology—a technology that is only viable in the universe of the book. How the world’s history panned out from that victory is certainly in a novel direction, with the dismantling of fascist thinking and the destruction of the USA due to the arrival of three planets in a rough orbit with earth, creating odd gravity wells, air and magnetic disturbances. It is a world where, in a passing comment, we learn that one of Stringent’s abnormalities is that he has five fingers on each hand—instead of the ‘usual’ six. Stringent is a half-man, half-ape, limousines are vastly overstretched, weaponry veers into the metaphysical and one of the characters ‘pays’ for the narrative’s very existence by coming out with nonsensical advertising slogans at odd moments. Vampires, zombies, cyborgs and werewolves are all viable earth-dwellers, and a permanent cloud of debris hangs in the upper atmosphere, held there by the fluctuating gravity fields. The science seems more than a little Dr Who at times…

The joy of it is within its own context. Loosen your mind up to appreciate both the founding genre and Hughes’s playful, self-realising style, and it makes for an exuberant read. The story never runs out of steam, or invention. What is more, due to the activity through and within the text, the reader takes a much more participatory role in completely the circle of the in-joke, a wink-wink-nudge-nudge that a speculative fiction audience should find quite a gas!
Posted by Djibril at 07:22