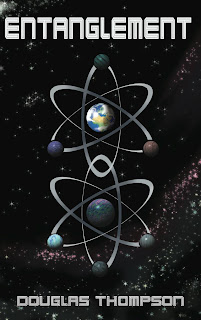 Caveat: My own Exaggerated Press published Douglas Thompson’s novel Apoidea in 2011. I have endeavoured to offer a fair and unbiased review of this novel.

Entanglement is an intelligent, adult science fiction novel that blends the new with the old. Like all good SF, its futuristic technologies are founded on present day developments and theories. Its foundation, therefore, is solid. At the same time, Entanglement is imbued with a Golden Age sense of wonder. There are moments when it possesses an almost Wellsian feel, moments that are Swift-like in their satiric incisiveness, then others when it reminded me of the great Robert Silverberg.

The underlying premise is that in order to achieve interstellar travel, planets outside our own solar system have to be seeded with receiving stations. Then, through the intricacies of quantum mechanics, the stellernauts are duplicated within these stations while their “real” bodies sleep on Earth. Not so much avatar-creation as what the author describes as a dupliport. It is, however, a far from safe mode of travel and exploration, because what happens to the dupliport “twin”, happens to the original version here on Earth. Death on some unthinkably distant planet really does mean death. Blue shades of James Cameron’s avatars? Well, in overall plot vehicle perhaps, but there the resemblance quickly ends. The scientific principle is entirely different and, more importantly, this is no heart-warming tale of the noble savage battling to save their culture and sacred places from the clumsy, mechanist avarice of “civilised” Terra. Thompson's novel is far more complex in its moral stance and particularly in its protagonists’ relationships with the alien races they meet.

And that use of the word aliens… one very strong theme of this novel is that real aliens are the strangers who appear on someone else’s planet, the potentially disruptive beings who blunder into racial, cultural and even physical structures that are deceivingly fragile yet immensely resilient (often ruthlessly so) to outside influence.

The entanglements of the title are, therefore, the difficult and often near-impossible attempts at connection and relationship between explorer and native. Cultural differences are often so extreme that no understanding can ever be reached. The moral boundaries, codes and strictures are often incomprehensible to one or other, or even both races. Tentative friendships are sometimes formed, but even these can prove lethal.

Coupled with these, are the entanglements of the terrestrial politics that surround the whole interstellar exploration project. A cast of characters, every bit as varied and interesting as the alien inhabitants of the worlds under exploration, struggle for power, love, and the integrity and survival of the project. These Earthbound entanglements and story lines form the glue that binds the novel together.

Entanglement is structured as a series of short stories, each quite possible to be read as a standalone work, but very definitely part of a greater whole. There are 17 interplanetary visits in all. This many flights of imagination, even one as potent as Douglas Thompson’s, will inevitably provide a somewhat bumpy journey. However, Thompson works hard to keep each encounter fresh and original, and for the most part it works extremely well. But there are times when it doesn’t.

The opening explorations are redolent with echos of the opening chapters of Bradbury’s The Martian Chronicles (I’ve always preferred the much more poetic US title of The Silver Locusts). The first story is a good example of this: told in the first person it takes us on a visit to a planet named Somnos; the planet and the emotions of the narrator are beautifully described, as is the initially wondrous, but increasingly difficult, relationship not only between the explorers and the natives, but among the explorers themselves.

On a few occasions, however, the stories don’t work. It is not easy to pinpoint exactly why. It is certainly not lack of imagination or bad writing, yet somehow the creation is clumsy, the story stilted. In a couple of cases there is a bit of a clunky “Take me to your leader” feel about the narrative. The natives inevitably have names and, again, for the most part this works, but on occasion they give the character the persona of a 1950s SF film alien. Not really the author’s fault. Coming up with names for the non-human natives of another planet is a tough job, and one person’s corny alien name is another person’s “Yeah, that sounds right”.

I used the word Wellsian earlier, and there are moments when the relationship between alien and human reminded me very strongly of an H G Wells story in which a man, stranded on a remote island turns himself into a god by wearing his diving suit to disguise his humanity. Wells was a writer in an age when there was still more than enough wonder and original invention to go round. Thompson manages to convey a similar wonder, prevalent in quite a few of his human-alien encounters. It is an innocence I have not seen in a science fiction novel for a long time. Thompson also captures Wells’ ability to transform the encounter between human and non-human into a mirror of our own intra-human relationships.

Entanglement is a compelling tour de force, a brave attempt, painted on a vast, interstellar canvas, a novel that manages to maintain a startling imaginative variety as we visit world after world. Its real power, however, is its Swiftian (particularly resonant in the story of the visit to 55 Cancri k) parables of Western civilisation and the effects it wrought on real life societies and cultures that were just as alien to ourselves as these imagined interstellar cultures and societies are to the novel’s cast. This time, however, the shoe is often on the other foot, tentacle or wing.