Nayman, Welcome to the Multiverse (2012) 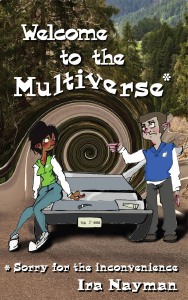 Speculative fiction is all about the extension of debates on humanity and its many facets, an open field on which authors may use parable in multiple genres. For the most part, this means taking the reader on a flight of fancy into which ideas or arguments are divvied out and brought forward as points of narrative interest, underpinning and structuring the plot like a… really well-fitting bra. If this is the case, then Multiverse is more of a corset of a book; one never forgets the structuring, clearly visible so close to the surface, and the dialogue between reader and narrative is not so much a creative discussion as an exercise in self-reflexive cleverness. It’s a flashy number, but not without its moments of fun.

This is a book that drips with satire, both the obvious critique and backhanded swipe. The strongest impression is that Nayman wants to say something. He has a need to take apart and put together again the issues that he wants to develop, and in doing this forms a direct opinion which mercilessly drives the pace of writing. This is a book, more than subtler forms of fiction, acting as a direct route into the author’s thinking, bias and interests. It offers insights by which the reader is to be amazed by the perspicacity and wit. Indeed, Nayman won the Jonathan Swift Satire Award in 2010, and runs a website that is all about the critiquing and opinionating on human society. This is not a man to be subtle! Using fiction as a vehicle, he fleshes out the work started in his Alternative Dimensional News Service writings on the website; by placing a subject through the nonsensical lens of being an ‘alternative reality’ version of events, he produces somewhat diatribic representation in a more palatable format. Thankfully, the format is palatable; Nayman is not above making goofy jokes and bringing in groan-worthy pop culture references (Star Wars, Star Trek, Quantum Leap, Back to the Future and X Files are especially glaring) as a shout-out to the home geek crowd to leaven his dough into something less leaden than the above may make it appear!

Nayman leaps and fizzles around his subjects, taking on the broad scope of reality shows, war, religion, misogynism, private enterprise, corporate politics, consumerist culture, trash journalism and futuristic technology with an eye to drawing out a meaning that is suitably thought-provoking and/or guilt-inspiring, but served with a hefty dose of sugar: prat falls, silly asides, running jokes. There is a lot going on in the text—to be fair, Nayman does fill it to bursting with bits and pieces that are recognisable, pithy and interesting. But what saves this from falling into a morass of self-indulgence is the pace; it rockets along, while very little actually happens in the main plot. That is, a lot goes on in the alternative realities visited, but these are background adventures for the inhabitants of those realities, not the main protagonists, and thus enable a wider canvas for satirical expression. There are also numerous authorial asides that meta-textually discourse on the hows and whys of certain decisions made on the technicalities of writing, or to expound a little on a subject raised by the narrative. This is a simple plot wrapped up in a lot of entertaining filler.

I did particularly like the intelligent furniture and appliances. Their input—while of course being an example of humanity’s loss of basic life skills, overuse of online resources and living in a semi-fictionalised ‘created’ world of the self rather than in reality—was also bitchy, funny and endearing. This is Nayman’s strength: he can turn a very cute trick with his characters, and create a likableness in them that helps to fuel reader interest. Although to begin with, it took something of an effort to get into. The style being so bouncy it comes across as a little too self-satisfied, and while an element of smugness hangs around the book, it is forgivable given the lively sense of interest that plays with narrative convention, having those asides, speculating on events using graphs and score boards, and generally doing all it can to make it a cheerful experience. After all, a satirist’s worst enemy is boredom; if they lose their reader, they lose their position and power. The almost frenetic amount of material thrown onto the page seems to hint at such desperation. But it was remarkably easy how quickly I slipped into Nayman’s frame of reference (possibly due to the geek in me, never far from the surface), and into the metre of the narrative.

The plot, briefly: Noomi and ‘Crash’ Chumley are investigators in a multidimensional detection agency, in a future where trade and movement between dimensions has become common, but controlled to prevent the whole multidimensional shebang from falling apart. Noomi, fresh from investigators’ academy, is partnered up with the only ‘normal’ investigator in the department (which is full of buzz-cut, muscle-bound dark-glasses-wearing stereotype male clones, so hard it is to tell them apart. Still, they are the background characters: maybe they come from rent-a-cop, the same sort of repeatable figures that appear in every crime drama to a greater or lesser extent, ratcheted up to a daft 11 of iteration for Nayman’s purposes). Their first case; find out who has been interfering with dimension-watching equipment (people may not be able to freely travel to other dimensions, but they can watch them, like watching TV), turning viewing apparatus into—well, they are not sure, really, but the ‘lab boys are on it’. Something bad, though, because someone has died for this new tech. On this premise begins a series of investigative adventures, each parcelled out a chapter at a time like all the best crime capers.

The frame here is obvious: a sci-fi comedy with male and female leads; adventures; some interesting wider ideas (for the reader, if not for the characters—this is, after all, the brainchild of a satirist actively working in generating a healthy amount of cynicism in his readers); the obligatory ‘romantic’ chapter when the leads get it on; a neat resolution with a final, case-solving dollop of information, and with it, the book. The ‘filler’ mentioned above comes in the form of the alternate realities Noomi and Crash travel to, where other Noomis are a wife and mother, a video game reviewer, a soldier, a reality TV star and a political lobbyist for morally questionable projects. In each of these scenarios, Nayman goes to town on the critical humour, lampooning the conservative press, the brutality and ultimate futility of civil war, the ridiculous nature of religious extremism, the trashy sell-out of one’s self to fame, and, well, an ethically dubious lobbyist is an easy target, anyway!

While the book is not going to win awards for complexity of plot, or depth of characters (the baddie turns out to be insane due to a mission gone very bad in her youth, and super-clever, so she’s going to cause major upheavals because she was bored. There is no apology for the shaky nature of this ‘awesome threat’, and the take-down is via a girl-on-girl fight. All text book action film stuff. Not exactly War and Peace), these are not the book’s point. It is a speaking trumpet for the author to finagle off about the topics he wants to critique, the nerdy culture references he wishes to buff up, and for the whole shebang to act as a parody of crime and sci-fi time travel/ dimensional travel dramas. The point is: to have a good time laughing at serious topics is to make you think, man.

It is not one for those who are not into their sci-fi; some familiarity with the genre is a requirement, or else it will be an incomprehensible mess to read. This is the problem with direct satire. As mentioned above, it relies very much on interesting and hooking its audience to make any sort of impact, and if interest fades it deflates faster into a sad mess of has-been writing than a milder form of critique fiction. It also requires in the recipient a working knowledge of the basics of its subject to be of any effect. Nayman’s satire is based very firmly in the political, in the social, in the Bigger Picture of social human existence. If you aren’t up on these subjects, then some of them may be lost on you. My own favourite satirists, Pratchett and Holt, work on a deeper level than Nayman because instead of frolicking over the social-political surface, they are gently mocking humanity’s emotional core; a subject on which every literate human will have experience and be able to relate to. Nayman’s book is more specialised towards speculative and sociological references.

I did become a keen reader; I found I was drawn in, interested and amused. Overall it was a good jape, and if a healthy spot of sci-fi comedy is your thing, then it will serve you very well.