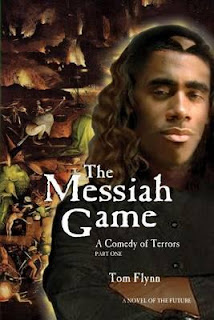 Part I of The Messiah Game: A Comedy of Terrors presents a complex and fascinating interstellar society with a rich and little-understood history, and uses it as the backdrop for a cutting satire on religious belief. The author, Tom Flynn, is a prominent figure in the atheist and secular humanist movements, as executive director of the Council for Secular Humanism and editor of Free Inquiry magazine. In this book—previously published in 2002 as the first part of a single novel, Galactic Rapture—he uses many of the standard tropes of science fiction to ruthlessly skewer religious leaders and believers of all types.

Tens of thousands of years ago, the mysterious Harvesters visited Earth and chose to seed innumerable planets across the Galaxy with its lifeforms, including early humans. Now, as the story begins (in the 24th century), the more advanced of the resulting civilizations have joined together in a vast Galactic Confetory. Less developed planets are kept under “Enclave”, that is, isolated from contamination by the larger interstellar society—although some have occasionally found themselves devastated by the Tuezi, an inscrutable enemy that appears without warning and destroys any nearby worlds. Lately, however, a mathematical formula has been found to predict the appearances of the Tuezi, finally allowing an effective response.

Earth, relatively primitive and only recently rediscovered, would normally have been placed under Enclave, despite its status as the mother-world of humanity. However, it has been admitted to full membership in the Confetory, because of two exports. First, “senso”, the recording and sharing of a person’s full sensory experience, has quickly become wildly popular as entertainment, and people known as Spectators live undercover on many Enclaved worlds and broadcast the full range of their exotic experiences to a voyeuristic audience of trillions. Second, religion, previously unknown to the Galactics and now an irresistible novelty to many, has created a vast new community of followers of Terran religious beliefs.

The most successful of the Earth-based religions is the Universal Catholic Church, whose popularity has won it a planet of its own, named Vatican. Far from being diminished by the discovery of many thousands of human worlds, the Church has concluded that Christ did not appear only on Earth, but would be incarnated at least once on every world. Accordingly, there is now a robust bureaucracy on Vatican devoted to finding and confirming such incarnations, much as saints are recognized by the Church today, and naturally this system is susceptible to politics and corruption. One such influence is Organa Greder, the wealthy, opportunistic ruler of the planet Khoren Four, who has just had her own Messiah candidate rejected by the Church and is now afraid of losing her considerable influence on its leadership. Meanwhile, back on Earth, the leader of the moribund Church of Jesus Christ of Latter-Day Saints is searching for a way to expand Mormonism among the Galactics—and to increase the revenue stream for his own senso broadcasts.

Into this complex web comes Arn Parek, a young man wandering the Enclaved world Jaremi Four with his mentor and former professor, Willem Dultav. Previously home to an industrial civilization, Jaremi was attacked by the Tuezi some centuries before and has largely reverted to savagery. Parek and Dultav make use of their extensive knowledge of the religious impulse to manipulate the unsophisticated Jaremian tribes; by presenting Parek as a holy man, and using a variety of conjuring tricks, the two convince the locals to provide all that he and Dultav need.

In the course of their travels, Parek and Dultav encounter Ruth Griszam, a Spectator unsatisfied with her assignment, and her two native companions, Ulf and Chagrin. Within a short time, Parek converts the barbaric Ulf and Chagrin into faithful apostles, while Griszam becomes Dultav’s confidante and lover. Her broadcast of her friends’ conversion wins her a far larger audience, and Parek a devoted Galactic following.

Meanwhile, back on Vatican, the mathematician who discovered how to predict Tuezi attacks has found that the same formulas can predict the incarnations of the Church’s Christs—and, in particular, he claims that the next one has already appeared. His discovery promises to spawn a mad scramble between various factions inside and outside the Church; the Pope wonders how best to make use of the information, while back on Earth, the Mormon leader manages to learn of the discovery and hopes to turn it to his advantage. Finally, on Jaremi Four, Arn Parek, as yet unaware of his growing Galactic influence, has begun to wonder if he might be more than just a simple con man...

When fiction is written with a conscious political or social agenda, the results can be problematic, particularly when the author is primarily an activist rather than a novelist. The writer’s agenda often takes precedence over storytelling and characterization. The problem is compounded when the work is science fiction; often such writers are unfamiliar with the literature and unaware of how more established SF writers have dealt with the same problems. Thankfully, Tom Flynn manages to avoid most of these difficulties. The characters in The Messiah Game are well-written and sympathetic, and have complex inner lives that lend authenticity to their actions, while the space-opera setting provides a vast backdrop and historical context for the action.

Flynn also demonstrates an impressive level of control while juggling the various threads of the plot. The story moves with ease from the bridge of a starship attacking the Tuezi, to intimate conversations between lovers, to the interstellar intrigue and corruption of Vatican, to the brutal wars of the Jaremian natives. The near-constant communication between Spectators, as they roam undetected on worlds under Enclave, effectively keeps the reader updated on events elsewhere while also focusing on local events. And the tantalizing hints of an ancient Galaxy-spanning mystery underlying the events helps to stoke the reader’s curiosity to see what will happen next.

Not surprisingly, given the author’s background, the book is quite critical of religion, and this may prove to be a stumbling block for more religious readers. Institutions of faith are uniformly portrayed as corrupt and exploitative; their members are either cynical con artists or ignorant dupes. In particular, devout Catholics and Mormons are likely to find the book offensive because of the special attention it gives to their churches. However, more skeptical readers, and even believers who can handle honest criticism, will enjoy Flynn’s examination of the contradictions and controversies attached to religious belief.

What weaknesses the book has are largely due to its origin as the first third of a much longer work. Little has been resolved by the end, and it is clear that Flynn has merely arranged his chessboard in preparation for more fireworks in the middle and final volumes. But the cutoff point is chosen well, allowing for a satisfying climax while giving plenty of teasers for the rest of the story. And the universe that Flynn has created is rich and complex enough in its own right to invite continued reading.

The second volume, subtitled The Messiah Emerges, appeared in September 2012; the third, The Destroyer’s Creed, will be published in April 2013. Together, the trilogy promises to become a landmark of politically-aware science fiction. Tom Flynn has created a fascinating universe, with compelling characters and unique technologies, and entwined them with a clear and aggressive social agenda. Readers of strong religious faith would be advised to approach with caution. But those of a more skeptical bent, or who are at least willing to tolerate questioning, will find much to appreciate. And open-minded SF fans of all stripes should enjoy exploring the galaxy that Flynn has conjured.