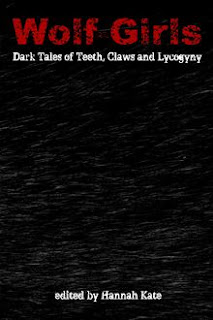 This anthology is edited by poet and fantasy author Hannah Kate, also known as Dr. Hannah Priest at the University of Manchester, researcher on medieval romance, werewolves, fairies and contemporary fiction. Wolf-Girls was published as an e-book by the small press Hic Dragones in 2012. It has also been published in a limited print version. The anthology contains seventeen short stories by well established authors and a few newcomers. The tales span thematically from the Wild West to the Siberian wilderness, from the modern businesswoman who educates the new wolf to the neglected siblings who ends up with foster parents, or the warrior woman who stands up to King Richard. Wolf-Girls is a nice collection of tales in a broad range of genres and themes, well worth reading.

I’m no expert on werewolves like Dr Priest, but I’ve always been fascinated by the wolf and the lycanthrope—the human who can change into a wolf or a wolf-like creature—and its appearance throughout history, from ancient folklore and mythology to modern popular culture, where it has gained a new popularity in the horror, science fiction and fantasy genres and especially in paranormal romance.

The wolf has always had a strong role in folk tales and mythology. Howling wolves in clear, cold winter nights will make everyone tremble a bit in fear, no? As far back as two thousand years ago, infants were given wolf teeth to chew on, so they would grow strong teeth. Boys in the Nordic countries were given the Norse name ‘Ulv’ (Wolf), so they would get the wolf´s attributes like sight, hearing and hunting abilities.

Shape-shifters are common in folk tales from all over the world, from Native Americans to the indigenous Sami people of Scandinavia. It was for instance believed that the Sami people could turn into wolves by dressing in wolf skins. Werewolves are rooted in the European tradition, creatures that either turn into a wolf by will or after being put under a curse or affliction, usually by being wounded or bitten by another werewolf. The transformation often takes place when the moon is full. They are also said to have extraordinary hearing, sense of smell, speed and strength, though they usually are vulnerable to silver bullets.

One reason stories about werewolves and shape-shifters continue to fascinate us is because they are both stories about us, but also stories about something totally different—about something primal lurking within, waiting to burst out, a beast ruled by instincts and impulses. Werewolves and shape-shifters do things that we maybe fear we would have wanted to do if we were given the chance, if we weren’t so civilised, if we went back to nature, where animals eat each other and those with claws, tooth and fur are the ones that survive. Many people long for closer connection to nature and animals, so while it’s a world of horrors and monsters, it’s also a world many yearn to be a stronger part of.

Werewolves and shape-shifters are frequent subjects of modern fiction and it’s difficult to avoid the classical presentations of them and come up with something new and different. The Wolf-Girls anthology does this simply by being a collection of stories about female shape-shifters and werewolves. Most stories about werewolves and shape-shifters are unfortunately not any different than other parts of folklore or popular culture; strength, power and aggression are traditionally associated with men and masculinity. Women are dangerous femme fatales and villains or innocent princesses who must be rescued. There is also the interpretation of womanhood as something close to earth, as Kate also points to in the introduction to Wolf-Girls. She writes of female werewolves:


“It’s true, over the millennia since the first werewolf story, the majority of lycanthropes have been male. ... It’s also true that recent fiction has tended to associate the female lycanthrope with fierce sexuality or ecofeminism. If they appear in stories with male werewolves, they are often constrained by the patriarchal power structures of the pack. They might fight and claw and bite, but this is frequently just a survival mechanism in the face of an unyielding or abusive social code.”

I think Wolf-Girls is a refreshing contribution to change this picture. All the short stories in the anthology have a she-wolf at the core of the plot. Some of them are loners, others are part of a pack and a society. Some turned into wolf by being wounded, others were born wolf.

Several of the stories herein are excellent, amongst them ‘Cruel Acts’ by L Lark, who tells a dark and weird tale about Veronika, who rents out rooms in her house somewhere near the Russian wilderness. It’s a warm summer, filled with boredom, misery and strange tenants. Then Eva arrives. She smiles unsettlingly, walks around naked, scrapes tartar off her teeth with her nails, eats and eats, sheds hair everywhere in the house and disappears in the night. Eva’s presence makes some of the other tenants leave. Veronika is both disgusted and fascinated by Eva. Lark is a great storyteller and creates a brooding and dreamlike atmosphere that grows in strength throughout the story. This was a good read.

Another nice story in my opinion is J.K. Coi’s ‘Run Wolf’. This story tells about Gwen, English professor and taxpayer, who is abducted by an unseen person and forced to take part in a sick game where she must fight against other abducted werewolves. The worst fight however, is the one Gwen has with herself, to keep the wolf on the inside. But when she discovers that her little brother also is kidnapped, fierce protective instincts take over and only the wolf can help. Coi does not tell a new tale about werewolves. But she is an excellent storyteller and writes compelling about cruelty and the struggle to control yourself when meeting non tolerant humans. I liked this piece.

The story ‘The Pull’ by Mihaela Nicolescu was another story I particularly liked. This is an utterly dark story about a female werewolf who meets a terminally ill man and the relationship that builds between them. The story is told from the she-wolf´s point of view. She reflects on human nature and the differences between humans and wolves. Nicolescu writes well and builds the plot nicely. This isn’t a new presentation of the werewolf either and the story and the ending are very dark, but I think Nicolescu has succeeded in writing about the wolf beast, the hunting, the killing of humans, in a way that feels disturbingly natural. “I am what I am”, as the she-wolf says. Well done.

I also thought the stories by Lynsey May, Marie Cruz, Helen Cross, Hannah Kate and Sarah Peacock were entertaining and well written. May writes a very short, but punchy tale about a man’s sexual obsession with female werewolves and his seduction of the werewolf Lucinda. Cruz writes about a nurse who’s bitten by a female psychiatric patient and the strange days that follow. Cross tells a tragic and funny story about a middle aged man who just can’t stand it when his wife is infected with lycanthropy and starts to grow body hair. Kate tells convincingly about a man obsessed with internet porn and his meeting with a virtual she-wolf. Peacock writes discomfortingly about the teenage runaway girl who one day wakes up next to her dead friends.

Wolf-Girls is a nice collection of tales, well worth reading. Many of the stories have left me yearning for more. It has been difficult to pick out examples. The stories I have not mentioned here are all good reads. The anthology travels through many genres and subgenres. You have urban fantasy, horror, science fiction, cyberpunk, the Wild West, the historical narrative, the folk tale. Many of the stories are written from a classical construction of the werewolf and/or the shape-shifter. There is the painful transformation, the bite, the full moon.

Almost all the writers in the anthology are women, which makes me wonder about whether it has influenced the stories and the broad range of women portrayed in the stories or not. You meet serial killers and predators; you also have bearded women, sideshow freaks, mental illness and psychiatric patients. As Kate writes:


“There are wives and mothers, sisters and lovers. Lone wolves and pack animals. Killers, nurses, bitches, librarians, delinquents and warriors. There are few happily ever afters, even fewer apologies. And definitely no waxing.”

This is perhaps one of the main reasons why I enjoyed to read this anthology. It´s always nice to read stories with a strong female focus, especially in genres and thematic areas that are traditionally male-dominated where women are sidekicks or something to look at. I feel that the she-wolves in this anthology truly are themselves. They don´t excuse themselves for being disgusting and hairy or monstrous killers, even though they are women. They just are. They feel strangely natural. Also, since the stories in this anthology introduces she-wolves from such a broad range of themes, genres and tradition, it also presents all aspects of women, be it the teenage girl next door or the mother who lost a child or the girl who is raped in the park. As a woman, I could identify with many of the plots and the women characters. And even though some stories are clearly stronger than others, I feel that all the stories in Wolf-Girls are well written and enjoyable, and something I would recommend both to readers who enjoy the horror and fantasy genres, and readers who like to be challenged in their perspectives on women.

--> yes, I do think this is a large part of the werewolf story's appeal, and the way the story is told, is in whether this impulse within us is to be embraced, controlled, or feared is often shown byt he type of story that is told. It's my opinion that this is why an increasingly urban Europe in the Middle Ages came to villify the wild -- though it could also be a genuine dislike of wolves in cultures which relied on herding (sheep, cattle, or what have you).
In today's modern society, I don't think the mere fear of the wild is enough to scare us anymore -- we think we've "won" over nature. Which is why a collection such as this, in which various aspects of female power are exemplified in lycanthropy, is so fascinating -- is this frightening or empowering? That depends a great deal on the reader and the assumptions he/she brings to it.