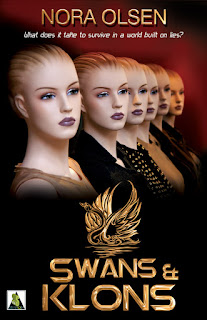 Swans and Klons, the second queer-themed YA novel (see The End) by New York-based author Nora Olsen, will be published this May by Bold Strokes Books, who specialise in LGBT literature in all genres, and is a light-hearted, fast-paced adventure in the utopia-turns-to-dystopia mould. The story follows two rebellious young girls, lovers, in a women-only world where all reproduction is performed via cloning, and a life of luxury, freedom, high culture and learning is supported by a large labor-pool of genetically inferior slave workers, as they fight to undermine their own privileged place in this society. The characters have teenage foibles, weaknesses and jargon, but ultimately are trying to be moral, and are strong and resourceful, against a sometimes baffling lack of resistance from their rulers. Apart from a tendency for blatant info-dump, especially early in the novel, and a sometimes naïve approach to genetics, this is a strikingly readable novel with appealing characters and an engaging premise that should keep young readers interested, whether the girls Olsen is specifically targeting who “can see themselves reflected in” a queer narrative, or a more general, open-minded readership.

In the opening pages we are introduced to Rubric, a sixteen year-old girl of an artistic genotype, a perfect clone of one of the original three hundred founders of Society, the idyllic post-apocalyptic civilization where everyone (human) is free, everyone gets to follow their dream with the help of a chosen mentor, and women of all classes live in complete equality in the absence of men, the necessity to breed, or perform any arduous labor. This is a World Without Men (WWM) of one of the classic types: human males were all but wiped out by a genetic disease, and have been replaced by reproductive technologies through which children are created without the need for either copulation or pregnancy. There is a certain Russ-esque cheerfulness to the way the last surviving men from this historic pandemic are casually referred to as “cretinous males”, and the girls in this story have a horrified fascination with the very idea of male sex or reproduction.

Rubric and her friends live in a dormitory where they have been raised since they were hatched, but they are about to come of age, be matched with a mentor, and set free into society by themselves for the first time. Each hopes to be matched with an especially glamorous, rich, successful or famous woman of their own genetic type, a match that will guarantee their own happiness and happiness in society. In this world, “everything you do is completely your choice” (20), but this freedom, this utopia, of course comes at a terrible price. Underlying all the freedoms and luxuries enjoyed by the “human” women of society is the forced labor performed by the inferior “klons”, women who we are told are genetically inferior, mentally and/or emotionally stunted, more enduring and better suited to physical, repetitive, dangerous or unpleasant tasks. The most effective literary dystopia is that which is not obviously dystopian to all, one where an idyllic life for the privileged class is possible not despite, but because of the terrible oppression of an underclass: the intellectual and artistic genius of classical Athens, the military might of ancient Rome and the great wealth of the antebellum South were all based on a huge slave economy, on the exploitation of conquered nations or peoples, on the relegation of huge swathes of humanity to a subhuman condition. This travesty, only slowly revealed to the reader, is the injustice upon which the cleverly executed conflict of the entire novel is built.

The viewpoint character of this not-quite 150 page novel is Rubric Anne, the “artistic” genotype. Rubric is very happy in the privileged world of humans in Society, and throughout the novel, although she strives selflessly on behalf of the klons, she does not want violent revolution and is constantly tempted to return to a safe, comfortable life (although there is never any real danger she’ll betray her friends in order to do so). Although her girlfriend Salmon Jo is the smart one, the scientist with a hacker’s genotype, and also the more physically fit and inventive, with access to technology and information and the inflexible will to change the world, it is often Rubric (and her “jeepie similars”, members of the same genotype) who has the initiative to try new ideas, to rescue individual klons, to use trickery and subterfuge to achieve their ends. It is Salmon Jo, working at the hatchery where young humans and klons are cloned and birthed, who discovers the truth about the genetic relationship of klons to humans, but it is Rubric whose relationship with her Nanny Klon (whom she accidentally learns has a real name, Bloom) both leads her to sympathise with the underclass and is responsible for a slightly deus ex machina rescue later on. An escaped klon, Dream, Rubric’s jeepie similar, shows similar resourcefulness and initiative, but is a very different personality (underlining one of the themes of the story, that our genes do not determine who we will be); she is more loyal, more ruthless, more brutal, but also more patient and ambitious. (Yet another klon jeepie similar we meet only briefly is aggressive and violent, willing to trample on others during her own escape.) Rubric’s mentor Stencil Pavlina is also her jeepie similar, but she is a shallow, jaded, spoiled artist whose best work is behind her, who abuses her klons and will do anything to recover some of her old reputation, including borrowing inspiration from her young apprentice. After dreaming of being apprenticed to the glamorous Stencil, Rubric soon becomes disillusioned and leaves her behind, but she remains an influence, something of a negative role-model, a reminder of what she does not want to become (but of the tempting easy life she could still go back to).

This is a powerful story, told by sympathetic but not perfect protagonists, and with both truly frustrating challenges and enough optimistic moments to leave the idea that real change is possible. Olsen does well to include klons in the fight against the totalitarian Society: so many slavery-analog stories involve heroic acts of liberation performed only by the white-analog characters, which is both irritating and ahistorical. (Although as far as we can see all the important characters are white, and I don’t remember anyone described as unambiguously non-white.) It is also nice to see a WWM dystopia in which, although the disdain for “cretinous males” is sensitively challenged, the queer elements are not, and the lesbian-dominated society remains the norm.

I liked this book very much, but it is not completely without flaws. The early part of the novel relies rather heavily on the infodump to provide the backstory: we are told that “jeepie types” means “Genotype/Phenotype” in a speech that is characterized as “maundering on about stuff they all knew already” (18), and later a four-page text is quoted explaining the history of Society and the cretinous males pandemic (46-9), with another “As you know, Bob” disclaimer after that. For rulers of a totalitarian dystopia, the “Doctors” seem strikingly inept and preventing two sixteen year-old girls from causing havoc, stealing equipment and cars, and having the run the of the country; Rubric’s occasional observation that security in Society was poor calls attention to, but does not really excuse this plot hole. Upon discovering that her genetic ancestor was a hacker, Salmon Jo observes that stealing or changing information in Society’s computers would be useful, and enthuses, “I bet I have some atavistic ability at this” (75). Not only is this a bit naïve genetics, but it also runs counter to the “genes are not destiny” moral of the story, and while one might protest that this is Salmon Jo’s naïveté, not the authors, it is never directly contradicted by the story (and she does take advantage of the [again] poor computer security later in the story). Nevertheless, these are minor criticisms of a well-crafted and intelligent novel.

Nora Olsen lists her goal as writing “thrilling stories and novels [for] LGBTQ teens”, and this novel certainly normalizes the lesbian relationships without fanfare or angst, but I think it’s also an accessible enough story that it should be popular with a general YA readership as well. It may not be all that politically sophisticated, but it is a good example of the dystopian genre that has no simple answers, no easy get-outs, and is as willing to beat up its protagonists as to show them blithely and sarcastically romping across the postapocalyptic landscape.