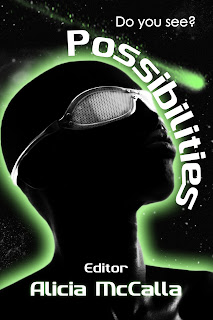 This short book is a collection of flash fiction, with the prompt of a ‘mystical bracelet’ as the beginning element to be included in each tale. The style, setting, and development of that idea were then entirely each writer’s own work. Such a specific project is one of a positive intent, in this instance drawn together by Alicia McCalla; a ‘librarian and writer’ and a woman with a mission, if information about her is anything to go by. The decision to make this flash fiction, it speaks volumes (the volumes of continuous narrative that 500 words or less leaves lying in the lands of possibility) about that intention. Short, sharp and with a need to get flavour and intention across ASAP, this is designed as a book of impact—a fictional wow factor. And it works.

The deliberate impact is to present a showcase of work that says speculative fiction is not a white-only province, either for writers or characters. This need to affirm is a socio-political imperative, using the shared love of the speculative to raise awareness, to raise the inspirations of the younger black community. State of Black has been involved in events and publishing with these intentions in mind; one of these events put it very succinctly on its Facebook page: “spotlighting science fiction and fantasy as a signature intersection of science, history, technology, and humanistic studies.” This has long been considered speculative fiction’s strength: as open forum, as open ground for expression and exploration, incorporating social commentary and debate.

For me, the best part about the speculative is that it doesn’t matter who you are, or where you come from; the story should speak for itself. Indeed, I was enjoying the stories, rather than ruminating on the background of the authors. This could be my countrified, liberal, middle-class, white upbringing, but for those still feeling the struggle of social bias, these stories are a joyous proving space. The fact that they are flash fiction makes the heavier, historical overtones for the need for such a collection a place of breathless pace, wrapped in (perhaps in keeping with modern society’s notoriously short attention span) bite-sized pieces of stimulating pleasure.

Deeper impact thunders along in strong themes that underlie the narratives. The history of black culture comes through strongly in the stories, inflecting their direction and the response of the reader; empathy, sympathy, shock and awe. In her introduction, McCalla looks back to the nineteenth century and the depiction in that era’s speculative fiction of coloured people thriving and succeeding; how speculative was a place to write, and rewrite, one’s cultural past and future, a hopeful, positive action. Possibilities as a title summarises the potential of coloured writers and characters as positive elements in the speculative world. Each story ends with the question Do you see? followed by Yes, I see, in a form of positivist liturgy that the reader, by reading, is partaking in. The sense is of an unbroken chain, of a desire to make the reader, whatever their background, creed or country, understand.

The prompt bracelet often becomes a binding force in the stories; something that will bring death, something which ties and binds—the heroine of L.M. Davis’s ‘Possibilities’ is driven by physical feedback from her bracelet to find her parents, who are quite possibly dead or hidden away following arrest, and Thaddeus Howze’s ‘Ouroboros Rising’ is the passing of a deadly, mystical burden from one practitioner to another. Rasheedah Phillips’s ‘The Family Circle’ uses the passing on of a bracelet from mother to daughter as the expression of guilt, of a sense of defeat; the brokenness of a family un-mended, passed onto the next generation in the hope that they will break the cycle. That which ties and binds… it cannot be avoided; these are people who are slaves to their bracelets. The bracelet is a more delicate form of a shackle.

The darker parts of history; slavery, segregation and racism, hang heavily over the stories. The ‘Opening’ and ‘Closing’ tales (by Edward Austin Hall) express the murderous anger and frustration of the repressed (and quite possibly plain old fashioned psychotic). Milton Davis’s ‘Amazon in Atlanta’ is the repulsion of soldiery by a band of coloured women in an alternative American Civil War, and Balogun’s ‘Soulless Cargo’ posits the freeing of a group of slaves—from an undead wizard. Nicole D. Sconiers’s ‘The Scarlet Bracelet’ has the scarlet bracelets as a mark of segregatory difference; in a deeply repressive world when black people are proscribed by law how to look, act and even think. Alan Jones’s hero (in ‘Color Blind’), restored to sight after a lifetime of blindness, is driven into despair by the inability of white people to accept him.

From such weighty roots, it might seem unlikely that the anthology could be anything but dirge-like and dire. After horrible atrocities, the old adage ‘we must never forget’ is wheeled out. At what point does ‘not forgetting’ become a wash of self-flagellation; the one part as victims forever, the other as the guilty instigating party, and neither managing to move on and find a proper sense of resolution and new affirmation of collaborative social effort? This anthology just might find a way. As suggested above, it is the very nature of flash fiction’s brevity, and speculative fiction demanding its quirky angle on events that saves this from becoming a ranting polemic. While the stories feature violence, racism, injustice, yet there are strong, admirable characters within them. There is the heroine who will fight the evil wizardly slave owner, the Amazonian women who form the special regiment, the heroine with the scarlet bracelet, who, despite he oppressive life, still maintains a sense of self and dignity, and the young protagonist in McCalla’s ‘Mathematical Genius’, mugged for his trainers, learns how to rise above his attackers—literally, and in a lingeringly metaphorical sense. Even if the bigger events seem too vast for us to truly get a grip on, the sharp, narrowed focus of flash fiction brings it back to a point of human experience; a single one, in the case of each of these stories, and shows that there can be greatness in adversity, and that together, the better people make the better moments, to build up the better collection. Perhaps a guide to a better way of living. As Terry Pratchett wrote: sin is when people treat people like things. The personal episodes of a flash fiction anthology are anything but people-less.

There are some sprightly moments, too! The steampunk ‘Set Him Free’ by Valjeanne Jeffers turns the idea of a shackling bracelet on its head, when it is used to free a prisoner from jail. Here the social commentary arises from social disapproval over a mixed race marriage. In ‘The Eternals’, Wendy Raven McNair writes a creation myth; the innocence of a child of the gods as creator and progenitor of all life, beginning in the cradle of humanity: (the scientifically-accredited area of) Africa. It’s a lovely, hopeful, gentle interlude.

I think, however, my favourite piece was the single poem in the anthology, Margaret Fieland’s ‘Neck Less’. Playing with the concept of ‘bracelet’, Fieland writes a witty piece about that which encircles; incorporating collars as, since she explains in the poem, very little rhymes with ‘bracelet’! Inferences between restraint and control play around each verse, and I think this is why this poem was my favourite. Control, or lack of it, is the levered crack through which possibilities can spill. In an anthology that highlights control, through its prompt, through the themes expressed via the social, personal and emotional, this poem summed up for me the fact that control does not last forever, and how we willingly wear and use forms of control as ways of understanding our world. The control of having only 500 words or less, or writing to a specific remit, of organising their work, was the control the authors used to express their disgust over socially enforced control, and yet how the cracks appear through which new ways of existence can be glimpsed. New possibilities. The poem was playful, but serious at its core. It suggested deftly, while skipping along with an innocent expression. For me, it was the best example of the anthology’s direction and intent, mastering impact with a creative delicacy.

This was a thoroughly interesting and arresting reading experience. There were some really talented voices in here, who I sincerely hope manage to utilise electronic publishing technology to get their voices out there—as McCalla hopes for. I enjoyed and believed their work. For me, this is the mark of ability: to make a reader want to read.