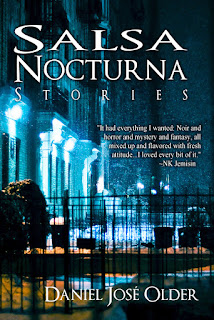 This collection of loosely interconnected fantastic noir short stories by New York-based musician, paramedic and fantasy author Daniel Older is published by Crossed Genres, a fast-growing small press justly famous for producing high quality, genre-bending, innovative and inclusive magazine issues, anthologies, and the occasional novel. The stories in Salsa Nocturna, while a few of them were previously published individually, make up a whole that is a lot stronger than its parts, but are not in any strong sense a seamless novel. There are stand-alone stories in here; there are loose ends aplenty; there are parts that do not contribute to the whole. But the world Older has masterfully crafted, a good-humored New York filled with ghosts and even-more-creepy bureaucrats and seen through the eyes of mostly Hispanic protagonists, runs coherently through all the stories like a soft musical soundtrack, improvised and soulful, but solid, recognizable, and comforting.

Most of the stories in this collection have a noir tone and structure: the protagonists are detectives, night watchmen, paramedics and others who daily put themselves in danger to protect others. Most of the stories take place at night, in abandoned buildings or parks, in back streets or riversides, against the backdrop of crime, random violence, corruption and vice. The difference between the gritty settings of the crime and noir genres, however, is that in this world the dead walk among the living; ghosts of various kinds, who for various reasons have not gone on to their rest, instead work, play, listen to music, hustle and kill in the same streets and neighborhoods as the rest of us, only we can’t see them. Most of us can’t see them. When the dead do impinge on the living (or on each other) serious trouble can occur, which is why the Council of the Dead (or COD) maintain an army of ghostly special agents to keep order, and help unruly ghosts to go on their way. Despite this premise, and the dark, deadly and sometimes heartbreaking events that fulfill it, there is a beauty to these stories that goes beyond the usual human struggle of crime writing: the characters are quirky and irreverent, the setting is filled with music and laughter and love, and events unfold with occasional surreal, absurdist or farcical twists. The stories veer from fun, through cheesy and clownish, to deathly serious and deeply poignant.

The two main characters in this story cycle are Carlos, a half-dead agent of the Council of the Dead, who roams the city tracking down rogue ghosts with his pallid skin, trademark limp and spirit-slaying blade, and Gordo, an old (living), fat, kind-hearted soul musician who has an affinity with ghosts and the night. Carlos is unique among the dead, in that he was half-resurrected, and so while he has all the features of a ghost (he is cold, white, able to see and hear other ghosts, does not age), he has a physical body, with all the strengths and weaknesses that brings. As a result of his undead status, Carlos has no memory of his previous life, neither remembering where or when he was alive, who he knew, what he did, nothing except for occasional dreams of a beautiful Puerto Rican ghost with mahogany eyes and a sleepy smile. Carlos is the agent the COD send for when a case involves both the dead and the living, since he walks in both worlds. For the first half of the book, about every other story involves Carlos and his friends, the raucous, rebellious, impulsive black ghost Riley, and Jimmy, a living boy who can see the dead due to a close encounter with the underworld early in the series. Alternate stories feature Gordo, whom we first meet playing his blend of rhumba and salsa on an electric keyboard for an audience of ghosts haunting a children’s home where Gordo works as a night porter. Gordo’s stories are especially beautiful, perhaps because the music really comes through in the writing, and because the old man is a really saintly character—earthy and coarse and real, but gentle and forgiving and generous. The supporting cast of Gordo’s stories are his family, in particular his son’s fiancée Janey; unlike Carlos, Gordo really exists in his community and is made of his relationships and his memories.

Halfway through the book Carlos and Gordo meet, and are joined not only by both of their supporting casts, but several new characters who first appear in stories of their own: Krys, a strong-willed and combat-skilled lesbian emo girl who died of cancer in her teens; Big Cane, a gentle, good-humored cowboy of huge size and the closest any ghost comes to being solid; Cyrus, the ancient ghost of a conjurer from the slave era. In these later stories the tension between the need to solve supernatural crimes and the corruption and nefarious intentions of the COD really become the heart of the story. A few characters are introduced but then sadly underused: Cyrus is a mighty and terrifying sorcerer in the story in which he is introduced, ‘Red Feather and Bone’, but thereafter he sits in the background, chuckling philosophically; CiCi, a hundred year-old story collector has an equally fascinating introductory story (‘The Passing’), but only appears tantalisingly in later episodes; a paramedic named Victor foils the deification plans of an “irritating old white woman” in ‘The Collector’, but then never reappears. The recurring antagonist of this world is the powerful, casually racist, dumb, officious and patronizing Councillor Botus, Carlos’s boss at the COD who makes his professional life miserable and has motives that our heroes find themselves increasingly at odds with.

Having treated this book in this review so far as if it were a novel, I want to stress that it really isn’t (not even an unfinished one, or a first instalment left open-ended for a sequel). Some of the stories don’t really fit into the narrative—although they contribute to the world-building—and others leave loose ends that even the first volume of a trilogy couldn’t get away with. Six of the thirteen stories herein were previous published in magazines or anthologies (one in Strange Horizons and two in Crossed Genres publications). As such, the stories should perhaps also be judged as free-standing units—and if so they would be less compelling than as parts of the whole: for noir/crime pieces they lack tension, the climax is often the first action after the exposition, and the reader is not kept guessing for long enough. I have no complaints as a reader of this linked collection, but I wonder if most of these stories would stand alone very well?

A few very strong stories I have no such misgivings about. ‘Skin Like Porcelain Death’ is a very effective, unpleasant and creepy horror story about a sexy, white college girl, and her lonely grandmother who surrounds herself with wide-eyed china dolls and a mesmerizing music box. Carlos and his sidekicks are almost overcome by the bitter old woman, in this story which has more ribald, coarse and disrespectful language than the Stephen King/The Hunger staples it’s based on. Aside from the sad stereotype of the old woman who can’t stand not being lusted after by men any more, this is a quite successful horror story. There are other stories that stand alone as well, even though they sit at one or another climax of the collection—‘Protected Entity’, where we first see the deeply troubling nature of the COD, and the need to fight against it, for example, and ‘Red Feather and Bone’, in which the first successful act of rebellion occurs, are both tense and lively crime adventures with house-to-house searches, terrified ferreting in subways tunnels, and other fine thrilling scenes. One of the strongest stories may be ‘Love is a Fucking River’, narrated by a not especially sympathetic taxi driver whom Carlos and Gordo inadvertently embroil in their fight with a demon and/or the ghost of his ex’s ex (one part of the Salsa Nocturna mythology I’m not clear on is whether all ghosts are dead people, or are there other kinds of spirits and demons out there?). The driver is a rough man, strong and passionate and macho, who speaks how he sees the world, objectifies women, works out and boxes, although isn’t naturally violent, and jumps from moping about the woman who just left him to lusting after Gordo’s daughter-in-law in the space of one italicized Yes. The narration in this story is extremely convincing, from the character’s unironic “because I am, after all, a man” to his self-justifying account of how attractive he is, and his reactions under pressure—both of fear, and ultimately vulnerability. Above all, this character is passionate: any degree to which he is defensive or aggressive is all his response to trying to get by in a world that he loves more than he feels loved by, and the reader (this reader at least) ends up seeing much more of a valuable, feeling human being than the macho idiot who started the story. When the title line is spoken, “Love is a fucking river”, it is so poignant it brings a tear to the eye. This masterful story would stand alone beautifully in any magazine issue, but it also drives forward the plot and the world-building of the whole collection.

And this is where this book is at its strongest: stories like those I’ve mentioned above, plus the serial-killer thriller ‘Tall Walking Death’, the climactic and very politicized ‘Phantom Overload’ (which I would say more about, except it is so climactic I don’t want to spoil any of it) are great stories in their own right as well as pillars shore up the overarching story that is this episodic almost-novel. But all the lesser stories, even the vignettes like ‘Graveyard Waltz’ (in which Gordo disposes of a corpse) and ‘Forgive Me My Tangents’ (in which CiCi gets online and flirts with a certain spiritual musician) have their part to play in the building of the greater whole, and never feel extraneous or a burdern to read.

This collection is unlike anything else, mould-breaking even by Crossed Genres standards, and it deserves to be widely read. Older is a powerful writer, weaving words together so that coarse colloquialism and Latino poetry sit comfortably side-by-side, bringing in passion, music, beauty as well as violence, selfishness and horror into a gorgeously painted world. This may in part be because he writes what he knows; as far as I know he is not a ghost or a detective, but he is a paramedic and a musician (who apparently performs some of the stories in this collection with his band at soul gigs in New York), and it shows. I’m sure—or at least I devoutly hope—that he will write more stories in this world. I want to know more about the characters and events that are only started in this volume; I want to see Victor and Cyrus and especially CiCi (who could be a more convincing female protagonist than Krys) come into their own and have adventures as vivid and passionate and political as those of Carlos and Riley and Gordo.