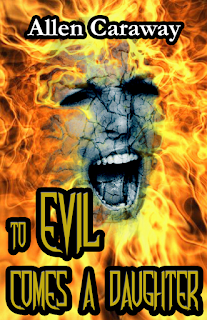 To evil might come a daughter; to the ranks of ebookery comes this offering from a writer who has under his section on Amazon the title of “World Renowned Tap-Dancing Hamster Instructor and three-time winner of the Most Amusing Pet Chipmunk award.” One might expect chirpy brightness, nay even a little of the old tomfoolery. But no, this is a tight thriller, a paranormal murder-mystery that stands foursquare to its brief and delivers with confidence.

Reviewing speculative fiction, one is rather in the habit of coming to await the other shoe to drop. It’s speculative, after all: what dénouement, climax or surprise awaits? It becomes a habit to expect the unexpected. With this one, I was, therefore, waiting, waiting… but there is no shoe to drop. There are no clever narrative curicoles. What I read was a book that Stephen King would be proud of. King is mentioned as one of the author’s main influences. Yes, there is a ghost wanting justice, and manifesting once or twice to prove a point, but the plot is driven by humans, human emotion, human action and human madness. It is a ‘normal guy’ with a flexible, luxury goods job, who has the time for investigations, who begins the process of solving what he thinks is a fatal mystery. And although events become intense and violent in places (there is no holding back on description when one character is shot through the head, and another is found hanging, castrated, by their neck), the ‘paranormal’ aspect does not slow up what is effectively an interesting and very read-able murder tale.

Our hero, a writer of articles for a car magazine, travelling to the USA to review a proud owner’s gleaming machines, discovers that an old girlfriend—the love of his teenage-hood—moved to the same town some years previously. She then disappeared, while out running, without a trace. After a little light haunting, the hero becomes convinced the girl is dead, and wants his help bringing her killer to justice. Teaming up with the girl’s uncle (conveniently a tough, street-smart ex-detective), they begin to piece together the girl’s final hours.

A few dead-ends and dangling red herrings drop into the mix for some variety, but for the most part, this is a solid read; entertaining throughout; the ghostly aspect adding a little dramatic frisson, without detracting. Homely details of middle-class rural America provide the setting: King’s Maine reborn, indeed. It is a slick and cosy presentation. There is no point in becoming excited over social, political, gender issues; these are simply not an issue. It’s a story—like it or leave it, but that is all and entire what it is. It’s recognisable in scope and detail, and strongly frameworked. Each chapter ends on a mini cliff-hanger; an unfinished conversation, a new detail added to the list of clues. By this cute trick the author keeps reeling one onward. It is actually refreshing to come across something that is absolutely itself; that is not a polemic for Deep Thoughts, or for the author’s favourite hobby-horse topic. Solid, likable characters are drawn in clear, somewhat simplified lines. This does not mean they lack depth, but the types are so much a part of modern narratives, especially those in television drama, that there’s not even the awkwardness of being thrown an off-centre loop. The dramatic title for example, spoken by a character at one point, is, we are told, a moral homily. So much for that promise of some Weirding action!

While mulling this point over, it is worth adding that the cover is a crazy choice. Eye-catching it may be; relevant to the actual story, it isn’t! All this said, I didn’t guess who the murderer was until it was obvious; kudos to the author for that! Examining the lead characters explains what I mean by clear, but dependably obvious, depiction. The ex-cop is grizzled, tough and a man’s man, living alone in one room in his uncared-for house, surrounded by data of the case, drinking whiskey. The hero is a soft innocent who toughens over time to cope with the facts of the can of worms he has opened. His best friend in America is a good-hearted, generous widower, there as sounding board, spare room and food provider: just the type one would chose to watch one’s back.

Even the violent moments do not ripple the pool of a ‘good read’ to any great extent. Like the hauntings, they are a dash of spice, but they do not derail the tanker-truck solidity of the novel.

There’s none of the hard-boiled or any fringe weirdness in here—elements that can run rampant through a lot of speculative fiction. On a gut level, it is the difference between an impressionistic painting (the bulk of speculative/‘odd’ fiction) and a highly detailed realism painting from seventeenth century; with every fold of cloth, glinting jewel and line on a face carefully laid down (the clarity of this book). It is a work written with a great assurance; possibly minute planning and rewriting; the balance never wavers, and the reader is never left paddling in mid-air. This author will stick with you, guide you through, and mark the path for you to follow. This is not horror as I would call it, unless the aspect of the human condition that allows for rage to hide and burst into bloody action is horrific, in the wider philosophical sense. The violent blasts are pretty nasty, but no time is spent picking moodily over the detritus. This book does interest, it entertains and thrills in some measure, but it is not going to shake the foundations of the mystery genre.

Although self-published, it could sit on a mainstream bookshop’s shelf and not be worried. Unfortunately, perhaps, it does scream ‘King’ from start to middle to finish. For those who enjoy that genre of writing, or even those who just want a book that will not fail them, they could do considerably worse than this. It is no sin to be a competent read, but I was surprised that an author with a lively biography had come up with such a… precise effort. There may be no fireworks of originality but it is brilliant holiday reading material; not too demanding, but intriguing enough to keep a relaxed mind busy.