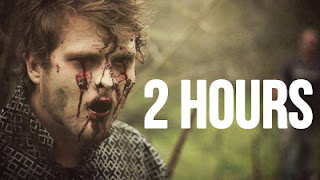 2 Hours is an unusual and exciting little horror film, only 26 minutes long, that brings a fresh perspective to the well-traveled territory of the zombie movie. This film, made on an infinitesimal budget by Utah filmmakers Michael Ballif and Josh Merrill, tells the story of a victim, already infected, who goes searching for other survivors who may have a cure—while fighting his slow transformation into one of the living dead.

The story begins with our nameless protagonist (played by Merrill) remembering a quiet, loving moment with his girlfriend, just before their peace is shattered by an attack of the undead. The scene ends inconclusively, but continues to haunt the young man throughout the film. This traumatic experience—along with the pressures of survival after the apocalypse, only vaguely alluded to—appear to have taken their toll on his sanity. The story is told almost entirely from his point of view, and it is clear that he is a most unreliable narrator.

His tenuous grasp on reality is further strained when he is bitten in a zombie attack. His story then becomes an existential and psychological struggle, as he searches a mountain wilderness for survivors that may or may not have a cure, while striving to hold out for the two hours before the change is complete. There are more attacks, which play out very much like a classic first-person shooter game. But the real fight is inside his head, against the whispering madness unleashed by the virus—and his own uncertain and painful memories.

Ballif and Merrill, who co-wrote the screenplay, clearly have a firm grasp on what it takes to tell a compelling story using minimal resources. With only a single camera and some terrific editing, director Ballif is able to convey both relentless motion and quiet, intimate despair. The gorgeous mountain locations provide an appropriate sense of desolation. The original score by Keaton Anderson helps to drive the story forward, while the excellent makeup and production design by Allen Bradford allow the images to be extremely realistic despite the restrictions of the production.

There are a few quibbles, though none of them spoil the film. Merrill's voiceover narration, while well-written and helpful, is told in a slow, stoned-sounding voice that quickly grates on the nerves. It may be that he did this to depict the character's gradual collapse, but it could have been done in a different way. And the vision at the end, while likely the result of a desperate attempt by the protagonist to cope with what is happening to him, comes off as cloying and overlong.

But these are still quibbles. Overall, 2 Hours is an astonishing achievement: a spare, economical horror movie that masterfully evokes the hopelessness and isolation faced by a survivor in any good apocalypse story. Ballif and Merrill are already receiving praise on the festival circuit, and it is clear that they have a bright future ahead. Highly recommended.

Watch this film online at 2Hoursthemovie.com
Posted by Djibril at 07:15