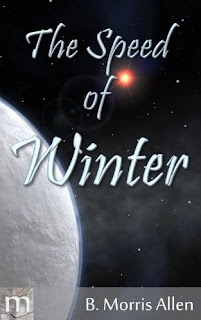 The speed of winter is the speed by which winter weather arrives, sweeping noticeably across steppe and plain. Winter is sometimes a metaphor for rest before rebirth; surely perfect for a spaceship of colonists, fired off towards a new world. But there is a cruel twist for these hopeful folks: there will be no change. No rebirth. There is only eternal winter.

Allen’s tale begins with the launch of a huge ‘arkship’. Packed full of equipment and colonists in deep freeze, these arkships are being sent forth from a dying Earth in a desperate bid to find a new home for humans to thrive. Working on shifts years long at a time, the single-generation crew cycle through the immeasurably huge distances involved as the ship ploughs through space, aiming for a world that has been speculated as being a possible candidate for development. The statistics on it are apparently good. But when the now-middle-aged crew arrive, they find the world a ball of raging storms and eternal frozen wastes. Amid mounting tension, failed experiments, rumour and hearsay, social order breaks down, and the crew descend into hopeless self-gratification. Then the only child born (against orders) during the trip is raped and schisms appear in the crew, leading to civil war.

Morally painful questions are raised by this vividly written story. Predominantly: In the end, are humans just selfish animals? Are we just sex and food and violence? This is a daring piece of social writing, as it covers years of events and heavy themes with great skill. Although it questions human response to adversity, not once did it feel over-ponderous. Excess detail is removed by the use of a conduit of attention: through the life and experiences of Elyse, the little girl, as she grows into adulthood. Events move around her and through her.

As a novella, it can be enjoyed as an action-packed charting of a dying civilisation, or as a text over which can be mapped those wider questions about the nature of humanity. As a futuristic piece of writing, it is a decidedly dystopian response. One is left wondering why these humans did not expend their energies to colonise instead of festering in their ship, decaying inside as the ship systems decay. There is also the question of what example we give to the next generation. This is a colony ship, but the one ‘new’ human in it is taught to fear, loathe, despise, and shun human contact. Her own murderous actions in later life seem nothing more than an extension of the values she has learned form others. This novella grabs and engages on many levels.

Allen’s webpage places the story in some context, revealing this it is the first part of a quartet of books set in the same time period and on the same speculative hypothesis; the end of Earth and the start of colonising the stars, but from different points of view. Some from characters sent into space, some from those left behind. Allen is certainly not the first writer to play with this idea, but examining human behaviour in a hypothesised situation, nominally in the future, is the very essence of sci-fi. Such speculation is limited to being based on knowledge of the current society the author lives in. The cycles of history suggest that human behaviour does not alter within a few hundred years, so projected human behaviours can be drawn from current and historical evidence, and when the drama is directly about the human rather than the technological or the philosophical, this is when speculative fiction really starts to earn its corn as a highly flexible platform for discussion. Stories like this one are more about us now than us as we could be.

In this instance, the vision is dystopian. When society breaks down after science has sent humans too far to return home, these humans fracture into territorial factions, petty-fiefdoms and warlords, where might is right. The trappings of ‘civilisation’, the chain of command and colonial leadership, fall in the face of overwhelming odds. Allen has humans, in adversity, returning to a Dark Age barbarity and desperation for personal survival. Certainly when put into dire circumstances, history shows that civilisations do topple; when they do, humans do turn on each other and the barbarians at the gate march inward and take over. Until they too are moulded into a new civilisation.

Once the barbarians settle, bringing their own values and rules, external (human) forces from further afield trading and influencing these barbarians, help to recreate the dialectic of human development; thesis and antithesis meets in a synthesis of a new type of civilisation. What is interesting about the situation of Winter is that this ship is entirely self-contained. There is no external influence. Power play changes among those inside, but instead of a new generation growing up and making their own choice about whether or not to follow their parents’ (barbarian) ways, this is a single-generation ship. With no new ideas, the population stagnates into a mass where those who have managed to survive still hold the same ideas held prior to their society’s breakdown, and it broke because of those same values. There is nothing here to suggest hope or change.

Elyse is entirely a product of this hot-house environment. She is simply a younger version of the same paranoia, despair and anger. There is no familial unit she can learn from or rely upon. Elyse’s parents are adults she addresses by their given names and manipulates the emotions of to serve her own desires. Eventually Elyse’s father is lynched and her mother fades away from regret, and she is left to be raised by the first officer and fed by another crew member that runs a dining hall protectorate. Familial bonds are not assimilated by this new generation, who has learned only to take what she can without getting caught.

The strongest character in the novella is Elyse. As a child who experienced minimal human contact during her babyhood and toddler years, when only her and her parents were awake on the ship, Elyse grows into a world of waking middle-aged crew who pamper her, then turn on her as their world falls apart. Social disintegration, a broken family, a nasty episode of sexual abuse (well handled by implication, not by blow-by-blow description) all go to create an angry outsider. While not necessarily an empathetic subject for the reader, it is through her eyes and experiences that the narrative runs; the story becomes more and more her POV as she grows into adulthood. She is the most purely speculative element of the story: how would a child, grown in that environment, turn out? And she is the tool of the narrative’s final conclusion.

There is a sort of desperate poetry, nobility, almost, to the idea of a failed, last-ditch mission; to the final stab made by Elyse and a few crew members at setting a colony onto the icy world below, and in the crew’s rejection of becoming parents. While selfish pleasure-seeking sex is one course of abandonment they turn to, yet the choice is made to keep this failure to themselves. So can humans change, fundamentally? The story would have been very different if they had made a go of colonising, of procreating subsequent generations born to a world of ice, knowing no other, and adapting to accommodate for that. Instead there is no change, no progress; just as there is no change in the wintry aspect of the planet they orbit.

Creeping winter is the central metaphor in areas of this tale. As the eternal snows rage on the planet that all their hopes were set upon, among the humans winter is for death, for ending; winter is the aging of the crew and winter is dark, sterile: literally; the crew have been sterilised prior to leaving Earth and Elyse was born via a surrogate womb. What the colonist reject, and the story implies by what it lacks is winter as the sleeping world waiting to be reborn. The ‘sleepers’ in ‘cold sleep’ are in a winter of their own, like seeds underground, waiting to awake to the warm, to the light.

This is a well-written, always-interesting and clearly expressed thought experiment in a laboratory of a narrative form. It will be very interesting to see if the further books in this quintet are offering different outcomes; different directions of thought experiment, or if all will be as dystopian and dark as this one. By comparison, Allen appears practical, bright and no-nonsense. There are no meandering diatribes on his site about the meaning or angst of life, but proofs of a technically-interested and proficient writer who has produced a natural, unforced style of his own. Educated and widely experienced, Allen’s personal information remains private. We don’t know what bias he may have from age, family, or politics, and in fact the book is refreshingly free of political agenda; focusing on the human animal. It is the sometimes surprising moments of clarity and even beauty that can crop up in even the most negative of situations that Allen’s book finishes upon. With all she has seen and experienced, for Elyse, the lonely, single survivor (until her own death of older age) madness, darkness and death are the only places to go. And yet for all Elyse’s (quite natural) broken trust in humanity, she wants to leave a testament to the whole enterprise. The form of it may be macabre; a grimly funny detail, but it is the desire of mankind to make our mark. For all the badness she lived through, Elyse would not fade into total nothingness. She wanted to show ‘we have been here.’ It’s small comfort, but it is a small light in the dark of a serious novella, and a tiny beacon of hope.

@Kate - Thanks! This is the kind of intelligent, insightful review every writer hopes for. Without giving too much away, I'll say that each book in the series will have a different focus and feeling.

@Other readers - look for a giveaway on Amazon later this month.