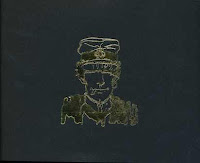 The Coanda Effect is a novel by Welsh writer Rhys Hughes, author of numerous novellas, novels and short fiction works, including the Fanny Fables series and The Crystal Cosmos. This attractive limited edition hardcover novel, a homage to the Corto Maltese stories of Hugo Pratt, is a story about journalist Lloyd Griffiths and the man he comes to idolize, gentleman adventurer Corto Maltese. We first meet our protagonists when they first meet each other, at an air show in Italy. Corto Maltese has such a vast impact on Lloyd that the journo begins to change the patterns of his own life, on a quest for adventure. In time, the two meet again and set out on a joint venture to stop the evil plot of a madman set on taking advantage of the second Balkan War.

Hughes additionally pays homage to a great many historical figures and writers throughout The Coanda Effect. The story takes place in the early 20th century, a time of great inventiveness, and social and scientific enthusiasm. The nonfiction of history is woven throughout the fiction, as is so popular with the steampunk genre. These brief glimpses of history as background for the story are part of what makes the tale so compelling and real.

Hughes’ writing style in The Coanda Effect is excellent. Not only has he managed to cram this slim book full of colorful characters and history, the writing manages to even feel like classic literature, itself. Hughes has a wonderful talent for capturing the romanticisms and whimsical humors of the era.

In much the same fashion as Dickens might have achieved it, Hughes weaves several salient socio-political points and questions into The Coanda Effect. As an agent for the Romanian government requisitions scientific labs and scientists alike, pulling them away from their prior studies, we are left to wonder, how much more progress toward curing diseases would mankind make, were we not always so preoccupied with our wars and finding new ways to kill each other? What does this say about our global society, in general, when we care more for how to destroy ourselves than we do about saving and supporting each other?

Later, the same agent has little difficulty convincing Romanian generals his new weapon—which literally destroys souls to harness the vast stores of energy—is a good idea. Wary at first, a single demonstration is all it takes to pull at the power mad heartstrings of the generals and set in motion events that could destroy not just one entire country, but many. It’s scary, sometimes, to think of all that mankind appears willing to give up in our race for glory. But who will be there to appreciate it in the end? When we are so eager to sacrifice the lives of others for our own convenience and physical comforts, what do we win? We can say, “Here, see my chair, taken at our victory over country X! Isn’t it lovely? It only cost 100,000 poor souls lost in the fight. Heroes, they are, heroes! It’s a fine chair.”

I would recommend this book to anyone who likes a little steampunk adventure, and to anyone who enjoys like-styled classic literature. Fans of Sherlock Holmes will be delighted by the style and speed of the story, as well as the familiar feel of the characters, so easily imagined as acquaintances of the dear detective. I must admit, I’d never read a Corto Maltese adventure before, nor had I read any books by Rhys Hughes; but after The Coanda Effect, it’s safe to say both have a new fan in me.