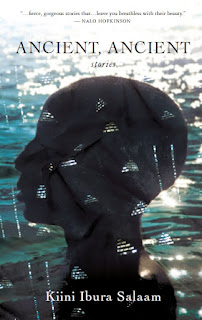 This new collection of arresting and beautiful stories by Kiini Ibura Salaam draws the reader immediately into a world of magic and struggle. The author describes herself as, “...a writer, painter, and traveler from New Orleans, Louisiana. The middle child of five, she grew up in a hardscrabble neighborhood with oak and fig trees, locusts and mosquitoes, cousins and neighbors.” Her fiction has been included in such publications as: Dark Matter, Mojo: Conjure Stories, Dark Eros, FEMSPEC, Ideomancer, infinitematrix.com and PodCastle.org. She works as an editor and copy-editor in New York. This collection of moving stories interleaves many themes, perhaps the most effective for me being the alienation of the foreigner.

One theme that runs through many of the stories is the conflict between ancestors and/or parents attempting to stay in control of rebelling younger people. In ‘Ferret’, a granddaughter must engineer the death of her grandfather to save the lives of fellow passengers on a travel bubble. In ‘Rosamoju’, an abused young woman wrecks a terrible vengeance on a rapist father. ‘Battle Royale’ presents us with a ‘Big Rock Candy Mountain’ gone rancid, as a young man sent on a nightmarish journey by his magical grandfather struggles to retain control of his sanity, life and choice of partner.

Another theme is the painful price people must pay to protect and care for the ones they love. Equi, in ‘Bio-Anger’, takes a job under the sea to support her mother and sons, giving up her human form in the process. A visit home goes horribly wrong and Equi realises she can no longer survive in the above. In ‘Pod Rendezvous’, Se-se defies her culture and traditions to help Laki escape a restrictive future, only to be abandoned.


“Even now, after she had restructured Laki’s future, Laki had blown her a kiss and was hurtling away without a backward glance.

Se-se’s vision went blurry as the pain of it broke in her chest.”

Throughout the language is stunning, like music become words. I found my own mind dazzled and my imagination stretched to keep up with the flow of images. The story that spoke most strongly to me was that of ‘Marie’, a young Creole woman who has gradually become disconnected from her Louisiana home and her family identity.

“[the trees of NYC] could not compare to majestic oaks whose powerful roots ripped up sidewalks, shaded porches, and gifted the earth with a bounty of acorns. When ever she mourned the loss of trees she found herself on a slippery slope to misery.”


“The first February was torture. She felt like she was trapped on an alien planet. At home there were parties; people went about masked and glittered. But New York had no carnival season.”

Gradually she becomes acclimated to her New York life, only to find there is another toll to pay:


“Loss and gain are too sides of the same heavy coin. As Marie lost the behavioural habits of an outsider, she gained a painful estrangement she had not anticipated.”

Accepted as white in a white person’s world, she cannot escape the everyday racism of her companions and the guilty pang that comes from tolerating it. After falling asleep on the subway she is accosted by a hooded creature who knows her innermost feelings. Marie makes a bargain with the old crone who agrees to take away her homesickness and painful feelings in exchange for a payment at sometime in the future.

Marie’s story, even without the supernatural elements, could stand as an exemplar for many, many people in today’s rapidly changing world. It is a story that has meaning for anyone, PoC or white, who has ever tried or had to adapt to life in a radically different environment. Perhaps never before in the history of our Mother Earth has the more or less voluntary mobility of people been so prevalent. Never has the potential for misunderstanding been greater. Refugees from Somalia, finding themselves freezing in the Finnish winters, take over the lower concourse of the train station trying to recreate the community marketplaces of home—terrifying the Finns in the process. A mother from the Philippines now resident in The Netherlands is disgusted by the casual racism of the Dutch. Culture shock has become a fixture of modern life. I left The USA and moved to Europe almost 30 years ago. The first years in Greece as I struggled to adapt to a Greek way of doing things, while never painful in the ways that Marie had to endure—I went the other way, from a bleak urban environment towards a lush Mediterranean one—still presented many of the stomach churning dislocations as in her story.

In the story, Marie is offered a choice. The hag will take away her home sicknesses and painful memories but the price, which she learns too late, is her future. It’s a crossroads that all ex-patriots come to. Which road to take? Eventually I found my ingrained Nordic sensibilities refusing to adapt to the social and financial attitudes of the Greeks. I fled—not back to the US but to the land of my grandparents. Unlike the Somalis, I like the cold.

Ibura Salaam has a wonderful voice and very sharp insights into the effects of displacement on her characters. I totally recommend this collection to any reader who wants to be challenged and enchanted. I hope she’s planning to stretch her talents on a novel—soon. I especially would like to know what happened to WaLiLa in Cuba.