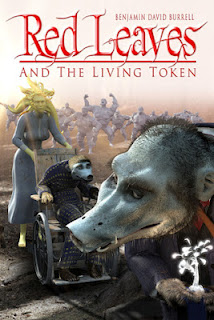 Red Leaves and the Living Token is a book about a young Zoen named Emret. Emret’s binding is failing, as is that of the world around him, and doctors have said he doesn’t have much longer to live. Emret’s Botann nurse, Moslin, has been reading to him from a book about the Reds, a divine species that once lived in their world. Emret’s father, Raj, has asked Moslin repeatedly not to read the stories of the Reds to Emret, but she persists. When Emret decides the only way to save his own life is to find a real, living Red, Moslin takes him to find one, and Raj must overcome obstacles to find and retrieve his son.

Red Leaves and the Living Token is Benjamin David Burrell’s first book. Previously a screenwriter, Burrell decided to self-publish the story of the Reds due to “the limited nature of screenplays, both in terms of length and feasibility of production.”1 The book has few reviews yet on Amazon and Goodreads (and both places seemed to contain the same reviews) but all give the book high marks, and one of those said the book was “superbly” written. I disagree. In fact, this may be the most poorly written book I have ever read. At the very least, it is in desperate need of a professional editing job; by the first chapter, I wondered if it had even been edited at all.

The text is rife with errors, to the point where I found it virtually unreadable. For the first time in over a year of reading books for review, my review notes include such things as, “Has this guy even read a book before?” and “I want to kill it with fire.” Before you go thinking me unfairly harsh, I will cite examples: the author uses ‘too’ and ‘to’ as if they were interchangeable; the same applies for ‘a’ and ‘an.’ There are a great many sentences with missing or extra words, respectively. ‘Where’ and ‘were’ are often used in place of one another, as are ‘than’ and ‘then,’ ‘passed’ and ‘past,’ and ‘shutter’ is consistently confused with ‘shudder.’ Combined and hyphenated words are often broken into two words, as well, making the text feel clunky and unwieldy. One prime example of the severe need for editing reads, “To confound further his dilemma with reality, as he stared through the stone arches, a pathway, made of a large, irregularly shaped rocks stones, was cut into the small and well worn cobble stone road.” (sic)

The only real ‘moral of the story’ seems to be that just because you don’t believe (in) something doesn’t mean you should keep the people around you from learning about/believing in it. This is a valid enough point, but it tends to get lost in the poor quality of writing. There is, of course, a political struggle, but it feels vague, contrived, and unremarkable. Each of the three nations—Petra, Botann, and Zo—wants to claim ownership of the Red and the religious relic, the Token. What they would gain from this besides a hollow sense of superiority seems terribly unclear.

Red Leaves and the Living Token is a perfect example of the dangers print-on-demand, self-published books pose to the publishing industry—especially authors—as a whole. Here sits physical proof that ‘anyone can (and will) do it,’ making it even harder still for decent authors to gain due respect and be taken seriously in this 9-5 world.

It’s common to end a book review with a recommendation for readers, but I can only—in good conscience—recommend this book to anyone looking for an example of how NOT to write a book. My sincere apologies to the author, as I’m certain this review is not what you had hoped for. Perhaps, with an editor who can tell the difference between ‘hopped’ and ‘hoped,’ it could be good. My advice is to hire one. I assure you, it’s worth the money.

Jessica is correct. The copy she reviewed had not yet been edited. It has since been through the magic hand a competent editor.