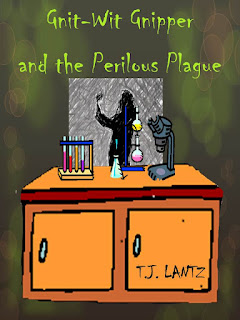 This is one cute little button of a short story. Gnipper, an aspiring (an often disastrous) scientific gnome, dreams of earning her tall hat of honour within her community. However, every project she tries to prove herself has ended in disaster. The day we join her, she has a final, drastic plan to showcase her talents in the lab, dabbling with biological manipulation. Unfortunately, the cure she has created doesn’t quite work, and her subject falls into real danger. Even more unfortunately, it is her single remaining parent: her somewhat arrogant intellectual of a father.

The writing is child-like but not in a derogatory sense. Rather, it is fresh and innocent. For an adult reader, the anticlimactic, non-sequiteur qualifiers following bald, bold statements make for a very, very dry humour. I particularly liked the description of Gnipper’s attempt to get her father (now unconscious and quite unwell) into her lab: on a cart she wheels to the stairs down to her lab, followed by “a series of bangs, crunches and snaps. Looking down the stairs at the broken cart and her father’s battered body, Gnipper remembered why she had stopped her work in Physics.” Clever long words over with, and more to the point, this is clearly a child’s story, advertised in the children’s section of Amazon. To a much younger reader, such statements of fact with modifiers of effect are simply more the normal way of speaking and of thinking, until growing up teaches a more joined-up way of expressing. This is the disarming honesty of the young who do not yet need, or have not learned, to dissemble. It is also very logical: this happens, so this happens, so this happens... none of your fancy asides and introspection. To read such a style, deftly handled, makes for a really refreshing change, and at no point does it feel as if the author is talking down to children at all; an equality of expression that Roald Dahl would have approved of.

Lantz is, in fact, a teacher of ten year olds, and is now also writing stories they can appreciate. His choice of subject comes from being something of a gnome fetishist/expert, depending on your take. According to his biography on ‘Goodreads’, he has ‘liberated’ several from his neighbour’s front gardens and made up back-stories about them. But this is also suitable for big kids, too, being such an entertaining and bouncy read. The quality is undeniable, and will be appreciated by children, who are more discerning than writers sometimes give credit for.

Stylistically, the story has a clear beginning, middle and end, but with a great deal of hints and ideas that will leave plenty of scope for further stories set in the same gnome-inhabited island; a future project heavily hinted at by the use of a subtitle Rosehaven: The Hidden City. The narrative drive is one of build up, drop, build up, drop: a series of non-sequiteurs that keep it from sweeping off into a more tragically epic style, while serving as these self-halting breaks to any pretensions the narrative might have to running amok. That said, there is a definite sense of gathering urgency, and there is a forceful sense of pace and general cheerful allons-y! that the story builds into a generalised climax of events. Gnipper’s increasingly dire position, her father’s very real, very serious illness, the doctor’s seriousness over the situation; it’s a bit nail-biting, until it turns out alright, and Gnipper’s first reaction is not to throw herself on her father and promise to foreswear science (this would ostracise her within her society, anyway), but to stride off and find her own hat of honour, realising she doesn’t need anyone else to tell her she’s worth it, but to believe it in herself. Stirring, self confidence-building stuff, but considering she has just averted a major outbreak of bubonic plague that she set off, this adult didn’t know whether to giggle or gape!

Without going deep into the sociology and history of gnomes, more is revealed bit by bit by which to piece together a whole pattern using reasonable speculation to fill in the rest. It’s an old trick of reader involvement, but it works well, drawing us into the mind and world of an adolescent gnome. No time is spent in describing the heroine overly or gnomes in general; indeed, it is not some way into meeting Dr Kelda that we find out she is not a gnome as well; so the reader’s mind is made to work more, testing and stretching the imaginative muscles. It also intimately engages the reader with the heroine from the start; we feel invested by our involvement.

The thematic overtones are worthy of note. Basically this is a story about finding your way, to be strong in the face of social pressure, to be honest about your mistakes and to take responsibility for your actions and clean up after yourself. It is about learning to take pride in oneself, not what others think of one. Certainly very laudable and what we wish we’d learned as children and try to teach our young. But Gnipper is also a bit blind, over-focused and not so good at understanding levels of appropriateness when it comes to the morality of her investigations. There isn’t a malicious bone in her body, but she’s no paragon, and thus a much better hero for children; recognisable and believable, a bit of a rebel and a bit of a clown.

There is even a suggestion of erosion of familial ties; the drifting apart of father and daughter from a close unit due to his professional arrogance and her desperation to prove herself. Rather poignantly, we are told a skillet in the kitchen, previously used by Gnipper’s long-deceased mother, has sat there, collecting dust, because neither Gnipper nor her father know how to cook.

This is when self-publishing via electronic formats encourages people with a genuine ability. And Lantz does have that. He’s working in an age and a style he knows very well, on a subject he shows obvious affection for and commitment to. I’d like to know what happens to Gnipper next. Is this, then, a fun and suitable read for kids? Yes, and I can imagine it being read and enjoyed as much at home as in a class at school.