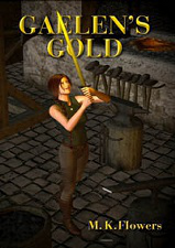 A common elf out hunting finds a mysterious box with a baby girl in it. He leaves her with a childless dwarven couple. Sixteen years later, the baby, now grown into a prodigious young woman named Gaelen, learns that she is a wizard and that the High Elves hunting her have decreed she must die because she is a powerful mana or magic user. This enormous book by father and daughter writing team M. K. Flowers, Gaelen’s Gold incorporates a number of familiar fantasy themes: coming of age, evil or misguided rulers and finding ones place in life—to list just a few. Along the way we meet more elves, scores of soon-to-be-dead goblins, dwarves, stone giants, wood fairies, more wizards and a cheerful dragon, Luminant. Dedicated to a dead brother and son, and described as “a labour of love,” I wish I could say I enjoyed reading this book. The authors have pulled together a vast assortment of tropes from Tolkien, Game of Thrones, the Bible and Walt Disney’s Fantasia. The description of the dwarf schoolhouse evokes The Flintstones. Just getting to the end of the pages was a prodigious task.

A self-published, first novel, the writing displays many of the awkward repetitious language structures of beginning writers. There are reasons first novels by untrained writers are usually not picked up by commercial publishers; Gaelen’s Gold illustrates many of these. Another problem is that they have tried to do too much. At 544 pages, the book is at least 100-150 too long. Worse, most of the length comes from endlessly repeated descriptions of everything the characters encounter, all offered in flat stilted prose that made me, as a sometime text-editor, scream for my red pen. This is a typical example.


They proceeded up the spiral staircase to the next level, which had a series of branching hallways. Along each hall were a handful of doors, and behind these doors were bedrooms, each decorated like the others.


They returned to the spiral stairway and climbed up and up and up some more. The different levels until now had only had a few revolutions of the stairwell between them. This time they went up at least ten revolutions before reaching the final landing where the stairs ended.

Even when she has the characters talk to each other, the dialogue is so stiff, I can’t imagine any living, breathing creature talking like this.


Gaelen stood and said, “Well, it is time for me to go to my bed, gentle-elves. I will see you in the morning.”
Mindful of his responsibility, Meradril looked up at her and said, “Even though you have promised not to try to escape, I will remind you that the scouts will be patrolling near our tents all nightlong.”
Gaelen stood with her hand on her tent, looking over her shoulder at them and said, “I understand, but that really is not necessary. I gave you my word.”

By the end of the book I had lost track of the number of times we had been reminded that Gaelen keeps her word—when she gives it.

Another problem I had was with the word and concept of mana, also called magic by the dwarves. The key events of the story centre around this substance, a kind of magical ichor that is essential for many activities. The High Elves have taken onto themselves the right to decide who and how this most important currency is used. The constant repetition of the word—mana—in the text quickly becomes irritating. The ubiquitous use of the substance for every situation is annoying and seems too convenient.

We also get reams of unneeded information. For example, we are told that the elves have two hearts, but no explanation of why this should be so is provided. It’s just a bit of information stuck in there, I think, because it sounded good. So, what we have is a straightforward story, not badly plotted but far too extensively told.

But the brief of a TFF reviewer is to look at and analyse the assigned works within the framework of political and social issues such as the portrayal of women, minorities and LBGTs. In these areas Gaelen’s Gold fails badly. There are exactly three named women characters in what is almost a cast of thousands. There is Gaelen, the heroine, who gets to be noble and have sword fights and go on adventures and her mother Korra, whose only functions are to provide food, make tea and do the washing up. Then there is Donareal, the villainess and the only truly evil character in the book. Making this—not a book I would buy for any young woman of my acquaintance. Sherwood Smith in a post on her LiveJournal blog, puts it more eloquently than I could:


I also have trouble with books aimed at young readers that are proportionately about active young female protagonists whose choices seem to be limited (between battles with demons, vampires, and wicked fae) to a couple of guys, their emotions and all their mental energy focused pretty much on them. It could be my age showing here, but I don't remember being interested in that kind of story even when I was young.


Of racial minorities—there are none. Everyone’s skin tone is white or pale or pink—except the stone giants which naturally are grey. Any hint of same-sex relationships is nonexistent. This book is a throwback. It reads as if everything the SFF community has worked towards in the last ten years didn’t happen and left me feeling frustrated and disturbed. Judging from the epilogue, it seems that the M. K. Flowers team is planning a sequel. That being the case I urge one or both of the Flowers to take a serious creative writing course to improve their use of language. There are some excellent fantasy writers coming out of Texas right now, like Stina Licht and Amanda Downum. I also suggest that the Flowers take a look at their work to see how it could be done.