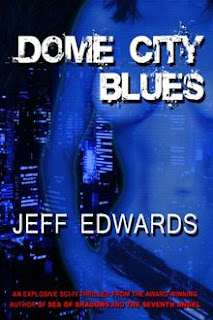 The year is 2063. Rampant disease has wiped out a third of the human population, and most of the other two thirds have been driven to living in dome cities for protection from pollution and harmful UV rays. This is where former detective David “Sarge” Stalin thinks he’s going to live out his retirement as a metal sculptor; that is, until he’s approached at a bar by a beautiful woman who needs his help. Suddenly, Detective Stalin finds himself perched on the edge of a war between man and machines as he tries to solve a string of serial killings that the police have already closed the books on... twice.

The first time I picked up Dome City Blues, it lost my attention within the first couple pages. Too many descriptions and explanations tried to give a full picture of the future all at once. I set it aside and came back to it a few days later, and I’m glad I did. Of course, information isn’t a bad thing, but delivery can make a novel feel like a textbook if it isn’t done right, and not many people read textbooks in their leisure time. Thankfully, Edwards seems to have remembered he was writing a novel a few pages in. After the initial burst of information overload, the story settles itself into a good rhythmic pace, letting the reader’s mind conjure up images as needed, rather than trying to stuff them all in at once by force.

Readers who soldier on through the first few pages of Dome City Blues will be rewarded with an entertaining little detective story fairly typical of a debut novel. By the second chapter, the reader can guess how the killings happened. By chapters three and four, we have a pretty good idea of who did it and why, though the details will remain to be hammered out throughout the rest of the story. At times, it can be frustrating waiting for Detective Stalin’s logic to catch up with what we’ve already figured out, but it’s an enjoyable read nonetheless, waiting for the finer details to reveal themselves.

At the heart of Dome City Blues, there are questions. The largest of these seem to be how much reliance on computers and machines is too much, and what is it that makes us, us? These days, most medical records have been computerized; at first blush, this isn’t a bad thing. With digitized record-keeping, our entire medical histories can be called up with a few quick keystrokes. This is fine enough, as long as we’re alert and oriented enough to correct any mistakes in the information. But mistakes do happen, and so do computer viruses, and often when accuracy in information counts the most, we aren’t necessarily alert and oriented. Who’s looking out for us then?

If a computer virus could contain the power to rewrite medical records, results could be catastrophic. With the advent of digitized medical records, we have hung our personal health and safety on the trust of nothing more than software programs. In an age when hackers routinely spill information all over the internet to prove that virus protection and encryption isn’t as secure as it should be, are we not proving our naiveté every time we go to the doctor? And what of the people who control those records? How can we so easily place our trust in them to get it right, every time? What of the software engineers? Are we so certain they have our best interests at heart, that we place what could amount to our lives in their hands so easily?

This brings us to our second question. As science and technology make daily strides in the medical field, our longevity as a species has grown. At one time in history, a thirty-five year old would have been a village elder. Today, the average human lifespan is currently approaching the century mark. This is in large part due to pharmaceuticals and organ transplantation. But when we aren’t even sure what it is that makes us, us, how can we be so cavalier in our search for immortality?

We pump our bodies full of chemicals that work on the brain, but we aren’t entirely sure how or why they work. We remove a faulty organ and replace it with a healthy one from someone who died some other way. How do we know, before we do it, that these are purely mechanical operations? How do we know that what we’re changing isn’t what intrinsically makes us what we are? Some people believe we have souls. Some believe we are nothing more than electrical circuitry. But no one really knows for certain. When even the most basic question – what are we – can only be answered with conjecture and hypotheses, how can we so willingly place our existence in the hands of businesses whose highest priorities are profit margins?

Jeff Edwards is a former naval officer and current military consultant. He is the author of the naval thriller series The Sea Warrior Files, which includes Sea of Shadows (originally published as Torpedo), The Seventh Angel, and Sword of Shiva. Dome City Blues is purported to be his first novel, written in 1992, though it was only recently published, after “a few minor tweaks here and there.” I’m not a big fan of military novels, so I can’t speak for his other books, but if Edwards were to make a series of Dome City Blues, I would definitely read them. The mysteries of Dome City Blues may not be hard to solve, but if you’re of the mind that it’s the journey and not the destination that counts, I recommend this book as a fun little weekend road trip.