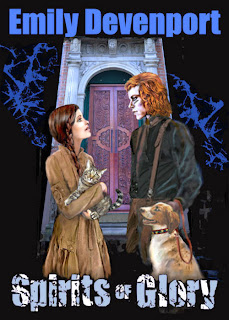 Spirits of Glory, available through Smashwords, is a beautifully crafted young adult story based in the futuristic/speculative colony world of Jigsaw, where the existence of ghosts and gods is as normal and expected as driving down a highway and taking a toilet break. The protagonist Hawkeye is an astute, intelligent and refreshingly vulnerable character, and this is as much a coming of age tale as it is a curious and well-paced exploration of wider themes such as identity, otherness and disability.

Hawkeye, despite her young age, is an academic librarian of some repute, her specialism residing in an event which took place earlier in her world’s history, known as ‘The Disappearance’. This event essentially caused the North and South of the country to irretrievably divide, with all people south of border disappearing. It would appear since this time, many things have become normalised. These include the presence of gods both Northern and Southern, mysterious ghost creatures that utter cryptic words of guidance, and Neighbours, mysterious co-inhabitants that exist shadowlike alongside humankind.

The novel begins with a group of Neighbours insisting Hawkeye accompany them on a journey to the Forbidden Cities of the South, in search of answers. Feeling as if she has little choice, Hawkeye joins them, bringing along her genetically enhanced pets; Wolfie, a dog and a smart cat, named Brat. Hawkeye’s knowledge and tireless study of The Disappearance appear to make her the perfect ‘expert’ for the trip.

Events are somewhat complicated by three things. Hawkeye suffers from pains in her joints and the journey ahead will test her physical abilities. Time fractures—seemingly ‘clouds’ that manipulate time at entirely different levels are drifted in and out of, making progress more challenging and complex. Finally, the Neighbours and Hawkeye are forced to journey with the Scavengers, a marginalised human group of ne’er-do-wells, who cannot be trusted. The quest’s purpose is to converse with the Spirits of Glory and reveal truths about The Disappearance.

The story features many twists and turns and feels very much an epic quest, albeit interceded by toilet breaks. In fact, it’s the regular toilet breaks which are taken by the group that contribute to the personal, yet intriguing, nature of the tale. The trip becomes a series of adventures and excitement sandwiched between these breaks, sleeps and medication taking. The effect this had, which was quite noticeable, was that the endeavor really feels very human to the reader, despite so many characters being non-human. There’s an irony therefore in the way in which Hawkeye is forced to contemplate her own humanity—she feels more affiliation with the non-human Neighbours than she does with the Scavengers. This is a steady exploration by Hawkeye through the novel and adds to the narrative’s appeal.

One of the most common genres in the YA section of any bookshop—virtual or real—is that of the dystopia, the satirically critical sibling of a perfect utopia. With its devastating north/south divide, Spirits of Glory’s Jigsaw is just that, a ‘bad place’, a broken place and somewhere you really wouldn’t like to be. Such novels are getting a lot of attention right now, with YA literature hitting cinema screens with the likes of The Hunger Games and, while there might be caution to any writer not to write a mere stale echo of a previously well-trodden thematic (like the overblown teenage vampires section of any bookshop), Spirits of Glory is refreshingly different and features a potent and captivating storyline that immerses the reader throughout.

There are also numerous threads in the story which add further intrigue. The relationship between Hawkeye and Neighbour ‘Boss’. The relevance of Hawkeye’s previous relationship. The way in which humans cannot ask Neighbours questions and, of course, what are they going to find in the southern cities? The author packs a great deal into a relatively short novel and I think this suits the desired readership well. It’s a dystopia that plays somewhat on feelings and emotion, and Hawkeye gave me the impression of strength, optimism and bravery.

I think a good sign of any story, and certainly YA dystopias, is whether you feel for the characters, and you certainly do feel for Hawkeye, Boss et al. I finished the story wanting to follow them beyond the pages, find out what they were going to do next. I would recommend the novel to any fan of the YA dystopia genre. It’s familiar in some ways yet refreshingly different where it matters. The story is beautifully crafted and easy to read; definitely take a look at Spirits of Glory if you can.