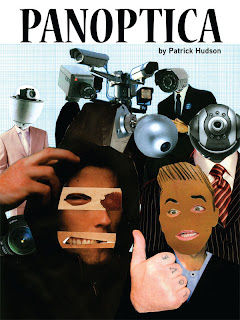 Panoptic: seen by all. Hudson’s Panoptica is a near-future parody of today’s surveillance society and its seemingly insatiable appetite for all things celebrity. Of course, being parody, this celebrity culture is extrapolated and exaggerated to epic proportions, and the result is a cross-genre work part Science Fiction in terms of futuristic technologies, but mostly Humour in terms of society and its blatant abuse of such technologies.

This is Hudson’s first novel, and self-published at that, and whilst I pride myself as an advocate of the small and independent presses, I nevertheless wondered at the wisdom of taking on such a novel for review. In the acknowledgements Hudson thanks his wife for copy editing it, which gave me the uneasy feeling that even if Mrs Hudson is a professional editor this can hardly be a cold, unemotional edit. Such an edit surely leads to slammed doors and lonely nights on the couch. But I took the book because its humorous premise appealed to me; and because I had a new Kindle just aching to be tried out. As a fellow humorist I know how unforgiving a genre it can be, and I was curious to see whether Hudson could ‘pull off’ such a wild idea as Panoptica.

This is London of the future. The Mall is lined with people, for today is the coronation of a new king. But not everyone is happy. Puritanical Titus Spring knows King Hugh Grant IV is not even an English brand, and Spring’s distaste at the swirling media circus is all but palpable, yet the three graffiti bombs nestling in his pocket as he awaits the appearance of the royal cavalcade are mere protestations, aren’t they?

But when the third ‘bomb’ blows the new king’s head clean from his shoulders, there begins a second media circus; one in which Titus Spring himself is the most awkward of star performers. The charge is Regicide—there’re pictures to prove it—because this London is constantly watched by the most invasive technologies. The people, long forced-fed on a diet of reality television, are still desperate for their fifteen minutes of fame. They’re baying not for justice, but entertainment.

Spring is to be given a very public trial, at the end of which he will undergo a celebrity execution, live on all channels and visors, including pre-death lunch with the embalmed corpse of Michael Winner and a song especially composed by the Estate of Elton John.

Dragged before Mr Justice Malmsey, High Court Game Show Host, he all silver-suited and song-and-dance ready, Spring astonishes all by invoking the ‘old justice’ of being allowed to plead ‘not guilty’. All that’s left is to appoint the defence council, none other than that showman Robbie Williams III. Thus begins Titus Spring’s quest to prove his innocence... after these messages.

The odd thing is that as an opening it really works. The relentless pace, the madness, the often chaotic leap from exaggerated voyeuristic concept to the people’s endless appetite for ‘the show’ is perfect to illustrate such a dystopian London Hudson is rattling at us from the page. Given today’s appetite for Big Brother, X-Factor and their like, it’s not too far a leap to make.

‘Don’t you care about justice?’ says Spring to his defence lawyer Robbie Williams III. ‘I've never thought about it before, but let’s give it a go,’ answers Williams.

The dead king is all but forgotten, but again that’s perfect for this society whose shallow attention wanders from one glittering object to the next, and all that matters is Spring’s sudden leap to notoriety and the drama therein. There’s going to be some ‘click-through’ on this, and everybody who’s anybody wants in.

Spring and Robbie Williams III escape the court—very easily, it has to be said, but then it’s most likely scripted—and begin a trek that will ultimately take them to Norwich, because that’s where Spring believes the answers as to who framed him lie, with the Court and MTVCOPS and all manner of would-be celebrity in hot pursuit.

It’s on the road that some of Panoptica’s funniest moments occur. The encounter with Mrs Passworthy, for example, is really an exercise in creating double entendres. It’s like Benny Hill gone wrong. Hudson is clearly the master of the innuendo. We meet ‘head hunter’, Pete, and he had me simultaneously enthralled and maddened by his almost indecipherable ‘street talk’. There’s also Cat Weasel in there, which probably gives away both mine and Hudson’s age. There’s a host of incompetent cops in pursuit, balloon cops that descend from the sky, and drones that appear from nowhere, and I think it fair to say the mid section of the novel proceeds at times at a breakneck pace.

If I have a criticism of the tale it would be of the ending. Without wishing to add too many spoilers, whilst I felt the ending did well to cement the idea Spring has learned and can now win the day, the actual ending itself felt incomplete. It seemed a little rushed, as if in its writing Hudson had seen the finish line and sprinted. It meant a lack of concentration to speech tags, for example, meaning there were times when I was confused as to who was speaking. It also has something of a ‘Well, Mr Bond...’ feel, where the villain waxes lyrical and long about how clever he’d been.

Parody aside, from a technical aspect I think a good judge of a book’s ending is its ability to foreclose on everything that occurred at the beginning. In my opinion, Panoptica doesn’t deliver in this respect. It’s true that we learn effectively the circumstances which led to Spring’s regicide, but I feel the story ends with too many people remaining who need to address Spring’s innocence or guilt. Whether this is a cunning plan on behalf of Hudson to provide a continuation of the story by way of a sequel I don’t know.

But don’t let that detract you from purchasing what is, after all, a terrifically fun and entertaining read. Any book where the cops try to arrest you adding disclaimers as to what Rights they’re taking has to be read.

However, to dwell only on the humorous side of Panoptica would be unfair. There is lurking depth here, too. Both main characters are seen to grow as the tale progresses. Spring, at the beginning, is a somewhat hapless individual dragged along by events, and is easily manipulated by the scene-hungry Robbie Williams III. But by the end of the book it’s Spring who is often more decisive and able, one thinks, to control his destiny, while Williams grows less ‘showbiz’ and more ‘serious’. It’s clear they have developed a friendship. We feel there’s hope for both.

There’s also I felt an almost apologetic idea that to change his fortunes Spring is forced to dilute his anti-publicity, anti-establishment ideas and embrace the system he despises, that to succeed he must use the ‘show’ mentality to his own ends, an idea that would surely be anathema to him at the outset. Does this mean Hudson’s message is we can’t fight Big Brother, that ultimately banality will win and we have to accept our world is destined to become Bentham’s Panopticon?

And let’s face it, there’s a very real social commentary going on here. I once heard that in the United Kingdom there is more surveillance than anywhere in Europe. We already live under the gaze of the technologies Panoptica presents. Our screens are already filled with hours of banal entertainment. This future is pretty much already here. Our privacy is already under threat, with all the fears of abuse that brings. So, what better way to explore those fears than with humour and parody? Often a novel like Panoptica, under the guise of comedy, is a better vehicle to do so than any academic study. In the words of the author, it has knob jokes after all.

Overall Panoptica works well; well enough for me to forgive any perceived shortcomings to the denouement and leave me no worries in recommending it should you feel the need for a fast-paced trip into chaos. In such a work there will always be times when the humour is a little forced, but more often the jokes work well and lead to a very pleasant read. And Mrs Hudson’s editing? Well, I did spot a few errors and omissions, but not enough to justify my fears at the outset. Mr Hudson is probably not relegated to the couch just yet.

I enjoyed Panoptica, and I think you will too, and at a mere £1.15 for a download you’ve not much to lose if you don’t.

"... even if Mrs Hudson is a professional editor this can hardly be a cold, unemotional edit."

Clearly, you have not met my wife.

Thanks for the review, though! Particularly pleased by the comments about the characters: I don't think comedy (at this length) works if you don't care a bit about the people. I worked really hard to make them more than comic types and ciphers.

As for ending... well, it's all about the journey, innit?

I should mention that a print version is coming soon and the ebook will then go up - get it cheap while you can, folks!