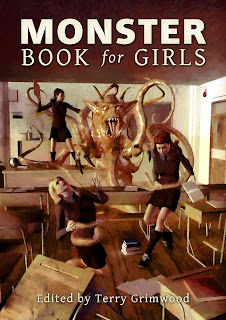 Exaggerated Press is published by horror and fantasy writer Terry Grimwood, who is the editor of this anthology of stories and poems. In his foreword to the book, he states that anthologies “grow a soul of their own, a thread within a theme...” Unfortunately, this is precisely what I found lacking in The Monster Book for Girls.

The collection is a real mixed bag of stories and poems with no discernable theme, or “soul”. Nothing connects or unites the pieces in the anthology, and there is no sense that an viewpoint is being developed, or an argument explored, or a series of images uncovered. The pieces have little in common besides the fact that they all feature females in some way. Stories and poems are thrown together with apparently little thought as to how they play off one another. Literary fiction sits next to schlock horror; thoughtful poems rest alongside comic japes. There is a case to be made for a ‘something for everyone’ approach, but I wished for a more coherent read, with less changes in tone from piece to piece.


The Monster Book for Girls, with its brilliant, evocative title, could have been all sorts of things. I was hoping for a fascinating insight into the complex relationship between gender, sex, and horror. There might have been an exploration of the historical, political and religious elements to the question of where females stand in relation to society. For example, a longstanding point of view claims that girls are inherently monstrous, and therefore must be controlled and tamed—or even trapped and destroyed. A feminist argument is that the monsters girls face are in and of society—they represent patriarchy and institutionalised male control over female lives and experiences. It would have been interesting to see these points of view clash and battle it out. I would have liked to have seen a few stories that explored these ideas with some degree of conscious intent. Even Buffy managed to take on the patriarchy, after all—these are not groundbreaking ideas, but they are sadly lacking from this anthology.

There is no implicit agreement on what a ‘monster’ could be (and no real agreement on who could be a ‘girl’ either. There are girls as in female children, but several of the pieces feature adult women protagonists.) So we have stories that tell of child sexual abuse alongside stories that feature sinister and murderous women. A large proportion of the stories are from male writers, which I found somewhat unbalanced, especially given so many stories about monstrous females. But then, this book is not really about girls and women and the monsters that we face and fight. It is a ragtag bag of pieces with only the most tenuous of connections between them.

Many of the pieces are problematic in how they present female characters. For example, Terry Grimwood’s story, ‘Think Belsen’, presents a world in which extreme thinness and anorexia is the ultimate value, one which women pursue with absolute blinkered devotion. The protagonist of the story is so desperate to lose weight after the birth of her child that she willingly contracts cancer. Worse still, in order to pay for the ‘cancer pill’, she sells her own tiny baby. How gender, bodies, and commerce interact is a fine subject for fiction, but I felt that it was too easy to blame the women involved for perpetuating anorexia, and I found it hard to believe in a society where women could sell their babies as a matter of course—or indeed, that women so starved are able to conceive in the first place. Society places a huge and sometimes oppressive importance on motherhood, and women’s value is often considered to reside in their ability to give birth and raise children. There was no explanation as to how such a stable value could have been overthrown in this story. I felt that it oversimplified and depoliticised the issues involved in thinness, dieting, and mothering.

One story in the anothology stood out as an exceptionally strong piece. ‘Razor Voices’ by Kelly Rose Pflug-Back was a fierce and sorrowful story of love and loss. Young homeless girls and prostitutes are being abducted and murdered, and the protagonist fears for her friends and fights for her own freedom. She makes a terrible sacrifice in order to protect herself and those around her. The imagery in this story is startling and beautiful, and Pflug-Back creates a convincing and moving character arc, with a bittersweet ending. This story was much more along the lines I was hoping for from the anthology. There are real characters here, dealing with all kinds of monsters – monstrous ideas, monstrous people, and the monsters inside themselves. I would have loved to have seen more thoughtful and poignant stories like this in the collection.

Another piece I enjoyed was the mysterious and evocative ‘The Spirit Level’, by Sarah Hilary. This was a flash piece that was packed with strong, precise imagery. The narrator deals with a complex desire and repulsion for her monster. It is compelling and lyrical, although somewhat confusing.

‘Monster Girl’ by Andrew Hook was beautifully written, although the way females were sexualised and devalued by the protagonist, Yoshi, was somewhat disturbing. Yoshi works as a host in a bar in Japan, where he consorts with lonely young women. He saves up and buys a lifelike doll to spend his time with, preferring her company to that of the real women he meets at work. Despite the title, the truly monstrous character in the story was Yoshi himself, with his creepily repressed sexuality and disdain for flesh and blood women.

There are several poems in the anthology, though many of them are the sort of ‘comic’ poetry that you generally see on souvenir tea towels or in greeting cards. A few of them were rather better than that, however, and I particularly liked ‘A Study in Solitude’, by Jessica Lawrence, a meditation on the strangeness of being alone (and perhaps ill) for a long time. It contains the wonderful lines: “But the / mirror whispers back, /its mouth moves when / I speak, its eyes open / when I wake, if it’s a / book I’m a page.”

Unfortunately, there were many more pieces that I thought were weak and a few which I felt were badly written. It is part of an editor’s role to help improve the standard of writing, and I felt that some editorial help and input would have improved some of these stories immeasurably. Many small presses nowadays publish writing of serious, award-winning quality, and small presses are in serious competition in the current market. Unfortunately, the lack of a distinct theme and the variable quality of the writing puts this anthology out of the running on that front, despite a great concept and a few fantastic stories and poems which deserve to be read.