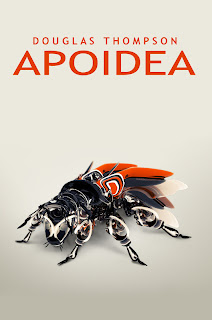 In his new book, Apoidea, Douglas Thompson proposes a chilling and potentially all too real scenario. Sitting in his hermetically sealed, climate controlled, home-compound in the Colorado desert, Gert Villers is feeling very pleased with himself. His creation, his children, miniature silver, bee-like creatures, ‘apodroids’, developed to take on the task of pollinating the world’s harvests after the death of natural bees, has made him unbelievably wealthy and given him a sense of satisfaction few ever achieve.

Nothing stays the same forever and Gert’s idyll is about to change irrevocably. The U.S. Government in the shape of Major Bob Brautigan wants Gert’s apodroids to use in the war against its enemies. Soon other visitors, Steve Dobs of Lemon, and Bill Yates of Winterra also request a piece of the apodroid pie. Gert refuses all of these requests even as he realises that events are moving out of his control.

Far down south in Mexico City, Del Freemont, a disgraced former employee also has plans for Gert and his apodroids. He arranges for Gert to be kidnapped by the apos, reintroduced to Del and shown a vision of the future potential for the apodroids. While Gert is in the desert, a swarm of apodroids invade the pentagon and kill Major Brautigan. Staggering back to his compound he is placed under house arrest by soldiers who refuse to let him see his wife Marielle. This does not prevent the apodroids from killing Bill Yates and making a near fatal attack on Steve Dobs. In addition, more than half the world’s AI bees have stopped working. Without their pollinization of the world’s crops, the world’s economy will crash and millions will starve.

Because the government and Gert’s other company officers are convinced he is behind these actions, they are treating him like a criminal. Frustrated and angry, he is surprised when a voice from the air-vent system tells him that he is to be rescued. The apodroids drug him, then form a swarm which first tunnels out of the compound and carries Gert away into the desert. Now in the eyes of the world and his family he is an escapee as well as a criminal.

Del’s plans for him continue. Plastic surgery and months of retraining create a new man. When the time is right, Vernon Hopkins is turned loose. He begins an odyssey that, guided by his creations, will take him down through Texas, picking up the lovely and troubled Melissa along the way. Finally Vernon and Melissa make it into Mexico where Del has been waiting for them. He takes them to the cave system where he has set up a control centre. He needs Gert’s engineering expertise to solve a problem that he has been unable to master. But has Del now become another enemy who wants to control of the apos for his own purposes? The answer to this provides the shocking climax of Gert/Vernon’s adventure.

I was drawn to this book because of my long term involvement with the organic and local food movement where I live. Here we are all too aware of the dangers of limiting species variety, of food contaminated by pesticides and antibiotics. As the book says: the need to create an artificial means of guaranteeing pollination after the destruction brought about ‘by our monoculture and selective breeding. As well as the excessive use of pesticides,’ is an all-too real possibility. Currently scientists are baffled by the devastating rise of ‘hive-death’.

‘In 2007, about one third of the US domesticated bee population was wiped out as a result of a phenomenon known as Colony Collapse Disorder (CCD), with some commercial hive owners losing up to 90% of their bees.’ (BBC, 28 September 2010)

More insidious is the spread of monoculture genetically modified crops. These, developed, sold and controlled by enormous agri-businesses like Monsanto, are causing wide-ranging problems in many of the developing countries that have adopted them.

‘Shankara ... facing the loss of his land due to debt, drank a cupful of chemical insecticide. Unable to pay back the equivalent of two years’ earnings, he was in despair. ... Shankara’s crop had failed—twice. Of course, famine and pestilence are part of India’s ancient story. But the death of this respected farmer has been blamed on something far more modern and sinister: genetically modified crops. Shankara, like millions of other Indian farmers, had been promised previously unheard of harvests and income if he switched from farming with traditional seeds to planting GM seeds instead. Beguiled by the promise of future riches, he borrowed money in order to buy the GM seeds. But when the harvests failed, he was left with spiralling debts—and no income.’ (Daily Mail, 28 February 2012)

All over the world, governments and farmers are handing control of their livelihoods and nutritional security to giant corporations that have greed as their primary motivator. These are very real issues that have been brilliantly addressed writers like Paolo Bacigalupi in The Windup Girl. Apoidea is a worthy member of this pantheon.

However, an event last week set me to thinking. First was the rescinding of Kormen for the Cure’s decision to cease funding Planned Parenthood The initial announcement of Kormen’s plans, set off a firestorm of reaction, debate and determination to protect what most regard as a critical agency assisting women. A support PP campaign was spontaneously born that generated substantial donations. Kormen’s newish right wing director Karen Handel subsequently resigned. Regardless of which side of the issue you stand on, what was truly remarkable was the speed and effectiveness of the response on various social media. Twitter, Facebook, LiveJournal et al. were a-buzz from morning to night.

This is where I saw the real parallels with Apoidea. What is interesting, exciting and frightening is the power of the hive mind, its uncontrollability, once set in motion, as Del learns to his detriment. Individually an ‘apo’ has limited intellectual capacity; collectively, in the tens of thousands they can learn, reason, plan and carry out complicated group activities that in the book make them a formidable force. In the way that many of the most important events of 2011, the Arab Spring and OWS were reported and driven by multitudes using social media hint at a sea-change in the way revolutions are carried out, the rise and proliferation of linked world wide social media may be a seminal event on the same history changing order as the Gutenberg printing press.

A few small quibbles: The use of blatant name jokes i.e. Steve Dobs and Bill Yates is not really bad—just silly. More annoying were the polemics and propaganda during Gert and Melissa’s road-trip. These create mind blank-out and turn-the-pages moments that interrupt the forward movement of the adventure. This seems to be a dangerous trap some authors fall into when they feel the message is so important it overrides the need to concentrate on the story telling. The message should be in the story; the story itself should be the message.

These aside, Apoidea is an exciting adventure story that raises some challenging questions about the world we are creating.