Alexandre/Loepp, Nuncio and the Gypsy Girl (2012) 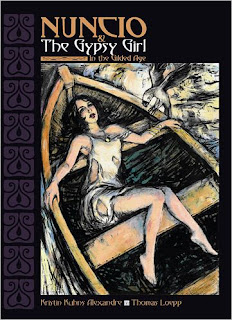 Nuncio and the Gypsy Girl in the Gilded Age is a romantic graphic novel that takes place in the early twentieth century. Populated by all manner of innovators of the era, the story centers around a Gypsy girl named Neci Stans and her love, composer Ezra Muster. Ezra is taken with Neci and her people, but is torn by her young age and his desire to succeed. When Ezra meets Marlene, a beautiful woman with connections that can help him, the two soon become engaged, completing the classic love triangle. But in this tangle of hearts, something more sinister lurks; something that could destroy them all.

Thomas Loepp’s beautiful illustrations bring the story to life. In the beginning, the very basic, scratchy artwork can make telling people apart a little difficult, but as the story moves along, it’s easy enough to sort out who’s who. This is far from a drawback; the artwork brings a simple elegance and tone that adds so much to the romantic feeling of the book, I can’t imagine it being illustrated any other way.

Author Kristin Alexandre brings the Dayton, Ohio of the era to life with a plethora of historical inventors, engineers, and other innovators of the time. Expanding to a national scope, Alexandre adds President and First Lady Wilson to the cast of characters, and expanding further still to a worldwide view, elements of what would become the Great War haunt the reader’s subconscious mind as the danger of German forces on our protagonists becomes apparent. The narrator, Neci’s African Grey parrot Nuncio, along with Neci’s snake Coil bring a vague symbolism to the story that adds to the haunted tone.

Questions of good and evil are a pervasive theme in the story. The author seems to like asking what they mean, if they are always large and absolute concepts. Neci and Nuncio repeatedly state that Marlene is evil: “...and it’s not all of her own doing, but nothing good will come of her.” Soon after, the point is made, when we see how romantically manipulative Marlene can be to get what she wants, and the dire consequences that result.

We see the wisdom in Alexandre’s choice of Nuncio as narrator when she uses him to make large statements about the human condition that perhaps no human could make without certain pretenses. Nuncio remarks on the importance of being careful in courtship... a thing no human ever really considers at the time, often to our detriment. If we were so wise, we would all date and marry only one person in our lives, never giving our hearts so easily, never ending up broken-hearted. But then, we would miss out on so many of the very feelings and experiences that make us human, wouldn’t we?

The author examines love even more closely when Nuncio adds that in the human world, “the plumage is all artificial.” This begs the question, what is it that we fall in love with? We, all of us, as human beings, are always so acutely aware of the judgments of others, that we make every attempt to sway those judgments in our favor. So how can any of us ever truly know another in the short amount of time it takes to fall?

Great comments and I agree that this is an interesting story!!