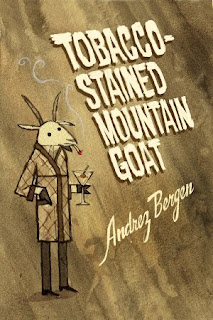 Tobacco-Stained Mountain Goat follows a man named Floyd through his daily life in the last city left on earth, Melbourne, Australia. Sure, other cities still exist, but you wouldn’t find anything alive in them. Every single living being left on the planet after a catastrophic viral outbreak has been walled into one supremely urban area. So, how does a government keep such a place from becoming dangerously over-populated and chaotic? Well, they don’t, really, but they attempt to control it with rampant streams of propaganda and fear-mongering.

The dim and gritty atmosphere is expertly set, using a massive amount of references to film noir and pop culture, courtesy of our narrator’s nostalgic love for film and all things reminiscent of simpler times. This made me a tad nervous at first; I worried about missing too many subtle cues and allusions. Luckily, the book does include a few appendices, including a handy list of recommended movies, so I watched as many as possible beforehand. ‘As many as possible’ turned out to be only four, but it was good enough, and the first, The Third Man, was really the key reference. As the story progressed, I realized the worry was groundless, although a familiarity with the movies certainly does add to the mystique. If you’re a movie buff, you’ll enjoy the abundance of nods to great movies and literature, but if you’re not, you’re likely to leave this book wanting to become one. The author even makes a few amusing references to his own record label, If? Records, where he records under the pseudonym Little Nobody.

The first pages of Tobacco-Stained Mountain Goat are a bit confusing as Floyd tells about a recurring dream that plagues him; once you sort out what’s dream and what’s real, though, the flow picks up the perfect tempo for the tale. Floyd’s common decency and inarguable sense make him an appealing character that’s easy to identify with. He’s the perfect narrator for this story; the perennial underdog, an average guy forced to make his way through difficult circumstances. He often feels he can’t do anything about his position in life and is at times suicidal, but he struggles through as best he can, bullied into being a hired-henchman for a government which has done nothing but take away the people and things he loves.

This book does a fabulous job of highlighting the complexities and dangers of current world social, economic and political climates. As one monolithic corporation wiggles its fingers further and further into the political realm and manipulates its way into the hearts of the general public, Floyd is unwittingly pulled deep into the propaganda machine, giving us a singular behind-the-scenes view of what is quickly beginning to feel like some warped, twisted three-ring circus. As the boundaries between government and corporation become ever less defined, selling the people mouthsful of lies while convincing them it’s food, the people eat it all up. It doesn’t even matter anymore if people recognize the lies, because they’ve become so enamored of the people spouting the drivel that they actually rationalize it all and defend them. – Eat it up, little doggy, there’s more where that came from.

There isn’t much danger here of people getting too fed up and wanting to take their lives back, because they’re haunted by the fear of having their loved ones ripped away on made-up charges or for things they have no control over; all the people in charge have to do is label them Deviants, terrorists, and the little-doggy lie-eaters fly into a panic (the many government claims against WikiLeaks and Julian Assange makes for an excellent real-life example of an attempt at this) ...because of course, if they called them Revolutionaries, well... that might be too tempting a term for the public to resist. As the head of the corporation himself says, “Reality and perception are entirely different things, and let me tell you, Floyd, reality is the lesser of the two.”

This is my first review for The Future Fire, and I couldn’t have asked for a better book to begin. The only fault I can find with this book, is after such a compelling, well-written narrative with fantastic imagery and a perfectly set tone, the flow falters at the end. The entire story seems to trip over some huge boulder, like The Flying Nun doing a face-plant, and it never really recovers. The author seems to try to tie everything up so neatly it’s painful, but then you can almost pick out the exact spot where he said, “ah, screw it,” and tossed in a handful of arbitrary questions to leave open, instead. The commentary on the current socio-economic and political climate is dead on without ever being overbearing, woven perfectly into the tapestry of the story, but the author makes no real effort at a lasting solution, opting instead for a quick and easy way out. Like this. Uncomfortable, isn’t it?

Your article makes me want to read the book. Going to go and buy it. Thanks.

Jessica, thanks for the thought and effort (and understanding!) you put into this review - sorry about the end of the novel, but I'm really chuffed you dug the rest! ;)

@Anonymous- I hope you enjoy it as much as I did!

@Andrez Bergen- It really was a great read, and I've recommended it to friends. It put you in solid with me. ;)