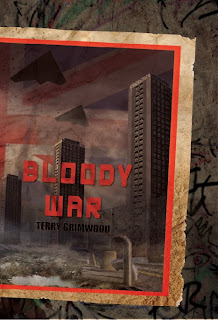 Bloody War is a new novel by Terry Grimwood and published by Eibonvale Press. Set in the not-too-distant future, the book is a dystopic vision of a gritty modern-day London caught in the middle of a brutal war. The aggressors are the unseen and unidentified Enemies of Democracy (EoD), and it would appear London suffers nightly air-raid attacks and is under perpetual threat of invasion.

At the centre of the novel’s bedlam is protagonist Pete Allman. Readers follow his narrative stream-of-consciousness as he wakes up with amnesia, befuddled by the existence of this 18-month old conflict. It is this slightly unbelievable, yet wholly forgivable, narrative tool which permits the reader the same sense of intrigue and discovery as Pete as he attempts to get to grips with his predicament. A significant feature of Pete’s life is his family, and his concern for them amidst the falling bombs and the nostalgic social pluck drives most of his actions and behaviour. It is the focus on the individuals, and the avoidance of wider ideological concepts that differentiate Grimwood’s text from that of Orwell’s Nineteen Eighty-Four. It would seem very much to be from the perspective of Pete the proletariat, rather than Winston Smith’s party affiliate, and this view has a certain vitality and freshness.

Pete is almost stereotypical in his modern ‘Allman’/‘everyman’ status; middle aged, wife, family and stable job. I would suggest the author was at pains to present Pete as almost a nobody, a virtual invisible—much like a Winston Smith. Pete is permitted a few interesting character components which are interesting; he is a reformed bad-boy, very much a biker (a proper one too—not a mid-life crisis suffering one!) and he still wears his hair long. The text is littered here and there with references to the old heavy metal bands of the 1970’s and 80’s and, while I might be wrong, I got the sense the author was indulging himself a little bit with this repeated inclusion! This in no way detracts from the novel; rather it adds depth to Pete’s character. Due to the protagonist’s background and subsequent regrets, I found him a little maudlin at times as it seemed that he had never quite forgiven himself for his prior wrongdoing, and thus while he worries about his family, his personal feelings very much dominate his rhetoric. While this doesn’t entirely endear a reader, it perpetuates his depth and realism—and it is his realism, and realistic reactions to the devastation around him, which helps immerse the reader within the novels pages.

The atmosphere of the novel endeavours to replicate that of a World War 2-era London, and the clichéd phrases “There is a war on!” become post-post ironic. They words sit ill at ease with the reader as now the biting clichés are no longer funny. It contributes to the absurdity of the predicament Pete finds himself in. Perhaps the idea that London is being bombed in the 21st Century veers on both the sublime and the ridiculous. But this is the point, war is ridiculous and the novel makes this assertion with endearing aplomb. The reader is drawn to challenge: is the author really trying to pull this off?—that is, the transition between modern-day peacetime, resplendent with nuclear deterrents and special relationships to one where the United Kingdom is under constant attack and with little voice of contention? The almost unfathomable nature of this position is however matched by Pete’s own genuine bewilderment at the situation, and subsequent lack of answers. There are a number of times I wished Pete would grab someone by the lapels and ask what was happening but he never does this with conviction, instead the story is unravelled over the pages of the novel rather that the brisk conversation a reader might demand in the same situation. While this might frustrate someone demanding immediate answers it also allows the picture to be painted fully by the end of the novel. This captivates the reader in the dystopian society Pete also exists in and it is this tangibility which negates the virtual impossibility of the situation.

The novel roars along at a blistering pace and there are plenty of cliff-hangers. I read the book in two sittings but many readers will require only one. It is very difficult to elaborate on the plot at too great a depth without releasing spoilers, but the novel is packed with twists and turns and these continue until the final page. I must admit I worked out one major twist quite early on in the novel but the audacity of the author to follow this through should be applauded. Some of the ideas are both ridiculous and conspiratorial, but the author delivers them so well this doesn’t seem to matter. The narrative is engrossing and the plot devastating. I would not necessarily call the writer a ‘wordsmith’ as such—the prose is basic but very well written. He is however, in my opinion an incredible storyteller and crafter of intrigue with a vivid imagination and the ability to keep readers on the very tip of their chairs.

I think it would be unfair to wholly compare Bloody War with its, in my mind ‘big brother’, Nineteen Eighty-Four. It lacks the intrinsic political ideology and linguistic expertise abundant in Orwell’s novel. I think however, this is what makes this novel a humbler experience, it isn’t trying to be altogether original yet it puts a modern twist on something many readers will already be familiar with. While this in no way lets the story down, it does perhaps limit it as the political ramifications are never completely explored. Part of me didn’t think the novel lacked anything specific in this regard—after all, it would appear the author was keen to present an individual’s tale rather than a grand political narrative. However I might argue that the individual focus restricts the discourse around the events the novel visualises, there are no new themes to come from the text, instead it’s simply a different take, albeit a very rewarding take, on the conventional tomes of dystopian texts.

Both refreshing and disturbing, Bloody War is a speculative gem; an honest, well written ‘What If?’ novel. It proposes an old fashioned war coming to modern-times London and describes deliciously the societal vacuums and issues this creates. The character of Pete Allman is a good vehicle for moving the plot forward as he grows impatient quickly and his temper bristles the novel along at quite a pace. The book is highly enjoyable, and while it doesn’t fully engage with the dystopian social politics it presents an engaging individual war-narrative with an increasingly tumultuous plotline. As much as Pete is a virtual Orwellian proletariat, I’d very much like to read a Grimwoodian Winston Smith.

Thanks for a very considered and thoughtful review. I appreciatd the care and time you obviously put into this.

The novel came to me complete while I was listening to Imelda May talking about "All Quiet on the Western Front" on Radio 4's "A Good Read" back in 2009. The plot, characters were all there in a matter of seconds it has never happened to me before and probably never will happen again.

You're not te first to comment on the fogginess of the political backdrop. It was deliberate. I wanted Pete to be stumbling about in the mist, to feel that dark forces much bigger then he was were pressing in. It's how I feel.

The conspiracy...yes, it's nonsensical and impossible. I don't believe in conspiracies, not big ones anyway, it was more a vehicle to get my point across. It could be my way of showing my sceptism by inventing the mother of all conspiracies!

You are more than welcome, I thoroughly enjoyed reviewing your book and I wish you every success with it.

It just created this air of dread and otherness that many dystopian texts do not always pull off, yet it really worked.