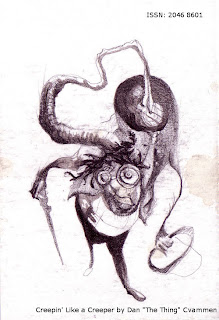 Magnificent Monsters is a slim home-made volume, only 64 pages, but packed with stories and poems from the comic to the sinister. This issue has a striking cover illustration by Dan Cvammen and is printed on lurid green, rather thick paper—so thick in fact that it needed not just one but two jam pots to hold it open on the breakfast table.


J E Stanley’s poem, ‘Letter to Poe’, which opens this issue, is a tiny gobbet of villainy which subtly premises those stories which draw on the mythology of their monsters at the same time as they add to the substance of their inspirations. Hammed up or toned down, there is a hard-edged, surreal flavour to many of the monsters here. The authors approach their monsters tangentially, less concerned with creating scary creatures as with exploring the essence of things that scare us. More encouraging still, many of the stories display a welcome sense of wry humour.

Bruce Dodson’s ‘An Unusual Case’ is told in the wise-cracking voice of an American private investigator but there is a weirdly dream-like feel to the narrative. This is a hilarious little acidic vignette to whet the reader’s appetite.

Mick Finlay’s ‘The Blessing’ is meatier: the disturbing story of a monstrous birth. Serious and dead-pan comic by turns, the story draws on the hopes and fears of motherhood in manic style. I loved the way the story fast-forwards to its conclusion, traversing a lifetime in its short span.

Then there are two vignettes—which sit between the longer pieces like the bloodied fragments from some disastrous experiment. S J Fowler’s ‘The Seven Deadly Sins/Gula’ is a luridly tinted glimpse into a Hieronymus Bosch painting of gluttony. Fowler successfully blends the medieval imagery of Bosch’s painting with modern cultural symbols to give it a disquieting slant. Kelly Boyker’s ‘Orthrus’ jolts the reader out of any remaining vestige of comfort by its surreal take on a real-life Russian scientist’s two-headed animal experiment.

Dave Early’s, ‘The Girl in Room no. 3’ makes heavy weather of its scene-setting and relies rather too much on its first person narrator but Early succeeds in drawing the reader in to his world of subtly shifting perceptions. The understated ending nearly lost me but the strength of the story is its ability to stick in the mind long enough for the reader, in this case a dull-witted one, to make the necessary connections.

‘The Demon’ is another story that messes with the reader’s mind, though in a more light-hearted manner, if psychotic episodes are the kind of thing that turns you on. At any rate, Marc Lowe has a distinctively chirpy tone, enough to make the conjunction of gluten-free waffles and severed arms seem almost normal.

Dan Smith’s poem, ‘Matinee Motel—Hollywood: Two Humans’, is a rather louche nod to the vicarious existence of the digital generation which isn’t quite long enough to engage my sympathies for the two (young) people it depicts.

One of my favourite pieces is Rhys Hughes’s tragicomic story of lust and high-dudgeon in ‘How to Lose Friends and Alienate People’, a deceptively light-weight piece, the humour draws heavily on Hughes’ trademark and endearingly awful puns. The fancy dress costumes, however, are both imaginative and witty: one character comes as a volcanic upthrust in a primordial ocean. The story seems to be going nowhere in a very entertaining way but, when it reaches its rambling conclusion, there is the sense of a clever resolution: like watching a child genius making a scale model of the Eiffel Tower out of a heap of rotting lettuce.

‘I Was a Teenage Rent-a-Frankenstein’ is the sort of scarily smart piece of fiction which SuW specialises in: a story that crosses and recrosses the boundary between fiction and non-fiction. The story explores the peculiarly perverted and distorted world view of a Mormon family. Featuring the outrageous Barkdull family, it’s a blackly comic tirade against the corrosive effects of religion. Mama Barkdull, aka Death Lady, subjects a young boy to a humiliating and abusive routine as she wet-nurses him into adolescence. There are some grotesque sequences partly related in a sinister red-neck cadence, which begins to seem positively demonic at the same time as it is hilarious. Ostensibly a coming-of-age story, the piece reflects in an uncomfortable way on the decay of religious morality in the western world but perhaps we are offered a glimmer of light at the end.

The great thing about Sein und Werden is the way it explores its themes inside out. Each piece has something original to say about people’s need to create monsters. The stories in this issue are muscular and thought-provoking. The print issue is an off-shoot of the web-based magazine, or vice-versa. The stories on the web-site are in a very similar vein to those in the print mag with some of the same authors cropping up, but the art-work on the web-site seems better integrated and, certainly in the case of the coloured images, works better visually. However, for readers like me, who like to prop their reading matter open between the breakfast things, there’s nothing to beat the sheer flexibility and ease of paper and ink, thick green paper notwithstanding.