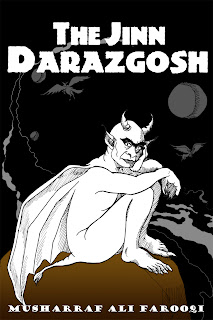 First in a series entitled ‘The Scandals of Creation’ published through Amazon Media, The Jinn Darazgosh is a supernatural fable which crafts a tale loosely around the familiar notion that ‘curiosity kills the cat’. The ‘cat’ here is the character Darazgosh, whose curiosity leads to problems in the lives other characters, then ultimately his own. The text itself is a mere 3500 words and is finely reminiscent of traditional folk tales. There is a familiarity with tales such as those of the Brothers Grimm, Aesop and ancient religious texts. They infer a basic morality of some kind, demonstrated elaborately across the narrative. Whether we agree curiosity is a bad thing or not—I certainly do not—the story nevertheless has an incredibly well crafted plot that creates a number of narrative strings which come together by the end of the tale.

Darazgosh is a Jinn, a form of genie common in Arab folklore and Islamic texts, that can apparently exist on a spiritual plane as well as the human one. Darazgosh’s purpose would appear to be that of a messenger. He eavesdrops on angelic conferences, determining what God has planned for mankind, and subsequently advises humans known as ‘augurs’ who in turn advise their people accordingly. Darazgosh overhears one such conversation amongst some angels, yet out of curiosity withholds part of the news regarding the God-determined deaths of two lovers. While the purpose of their deaths never revealed, and the pettiness of God’s whim in the tale is unexplored, Darazgosh’s actions ultimately save the lives of the lovers.

The construction of the plot and its subsequent unravelling is superb. I am unsure whether this is a retelling or translation of a specific Arabic tale or a fully reworked adaptation of a mythical story, but there is a genuine brilliance to the maintenance of such a narrative, and the simplistic yet precise way the story is conveyed. Ancient religious texts are often written in a simple way—the messages were usually directed at the poor and needy of the time, not the scholars and philosophers. Therefore it is a challenge, in the 21st Century to tell a story such as this that yet retains the innocence and simplicity of the genre. The narrative isn’t in any way a challenge to read and feels effortless and comfortable.

However I also feel the need to wrestle with the problems this kind of text presents in a modern context. It might be argued that the suppression and repression of women is sometimes at its most fervent in many ancient texts. The Jinn Darazgosh, written in this archaizing style, is not an exception. While it might be easy to negate writing about the abuse of women as being, sadly, historically accurate, I do not believe it should be glossed over as irrelevant. In the tale an honest, kind and generous young woman is essentially sold into marriage and later raped. While this is isn’t the only form of abuse in the story, it is perhaps the most striking and this is why I wish to discuss it. The delivery of this treatment, in particular the rape, is done so in such a matter-of-fact way it should be shocking to a modern reader. The coincidental and vehemently selfish manner in which the perpetrator rapes the woman in never considered either, appearing to normalise the assault. The rapist here would appear to be, if anything, ultimately rewarded for his behaviour and, if such actions and fates are controlled by God—which the nature of the text might arguably imply—then God is permissive in the abuse, resulting in scant justice in the story’s resolutions.

However the ‘crime’ of the tale isn’t rape but rather curiosity which, in our more enlightened eyes represents a deeply unpleasant logic. Texts such as these are usually given protection or apology, under the guise of being traditional, historic or mythological, but this doesn't mean this is valid defence. Texts should be challenged and kept alive by analysis, interpretation and debate. The theology behind a world where curiosity is worthy of punishment yet rape is shrugged off makes me wonder how advanced our world might be if it had been the other way around. So, vitally, The Jinn Darazgosh provokes great debate.

While I found the treatment of this issue unsatisfactory, this in no way detracts from the skill and the writing of Farooqi—the book is crafted expertly and with an extremely sharp eye for detail and imagination. The construction is complex yet consistently maintains a coherent simplicity that would perhaps appeal significantly to fans of intelligent mythological narratives. The story is part of a series so it might be interesting to follow how the collection unfolds.