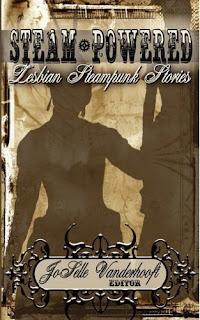 Steampunk is often associated with nineteenth-century Europe, implying a world the majority of whose population is under colonial rule, and where gender roles are still strictly segregated. This is, of course, a very narrow definition of a far wider genre. However, if this subsection of the genre has been criticised in the past for the uncritical romanticisation of a far from perfect moment in history, it’s equally true that it provides ample opportunity for engagement with this historical period.

A number of the stories in Steam Powered: Lesbian Steampunk do just this. A lesbian story in this setting is necessarily going to challenge some cultural mores, but most of these stories go beyond that, bringing in issues of race, class and gender. A notable feature of this anthology is the sheer range of settings used. N.K Jemisin’s ‘The Effluent Engine’, has as its main character a Haitian agent, sent to New Orleans to find a scientist to develop an engine that will produce energy from the waste product of rum distillation. Only with this energy will her countrymen be able to withstand French colonial forces. ‘The Padishah Begum’s Reflections’, by Shweta Narayan, is set in the Mughal court of Shah Jahan’s daughter Jahanara and in the context of diplomatic relations with the British and French. Narayan chooses not to simplify or explain her history, leaping quite happily from the Mughals, to Tipu Sultan to Shivaji and trusting the reader to catch up. Both of these stories engage with the larger politics of colonial history in ways that are complex and give a lot of depth to comparatively short pieces. Both fictional worlds give the impression that they could quite easily sustain longer works. In the case of “The Effluent Engine” in particular I think a longer story might have done more justice to the plot.

Georgina Bruce’s ‘Brilliant’, which takes place in a train travelling across Africa, is a completely different sort of story. Occasional references gesture towards a complex world outside the train, but the focus is entirely on the two central characters and their relationship. The setting and the style give this piece a very classic, early Twentieth-century feel, and it’s one of my favourite pieces in the book.

Not every story that attempts to engage with Victorian mores does so successfully. D.L. MacInnes’s ‘Owl Song’ starts off well enough, with a British father despairing of his daughter’s shameful (and open) interests in women and engines. Once the daughter has been shipped off to South America it all goes downhill. The story’s attempts to deal with the racial and cultural aspects of the romances it introduces are clearly well meant, but shallow and unsatisfying.

‘Love in the Time of Airships’ by Meredith Holmes also sets itself against historical social norms, this time in Europe. I get the feeling that this would make for quite a good film. As a short story, it is far, far too long. Particularly since things happen so abruptly; the predictable American heroine who is uncomfortable with European class consciousness takes all of a minute to leave her evil husband for a working-class woman.

And yet, as I mentioned above, steampunk as a genre has far wider interests, and this focus on the nineteenth century is only a part. Other stories in the book demonstrate this admirably. Beth Wodzinski’s ‘Suffer Water’, one of the best pieces in the collection, plays with the tropes of the Western and has a cyborg for its protagonist. Rachel Manija Brown also touches on the western, marrying it to gundam-esque robots that would earn the story points for sheer coolness even if it was not wonderfully written. Mike Allen’s gorgeous ‘Sleepless, Burning Life’ bases the mythology of a universe on something that feels like clockwork. Mikki Kendall’s ‘Copper for a Trickster’ feels a little like a myth, and so works despite the ending that is not quite horrifying enough. Tara Sommers is in slightly dangerous territory with ‘Clockwork and Music’ which tackles mental illness, institutionalisation and automata. I think she does well: she certainly manages to create something that is quiet and creepy and lovely.

Some stories had me questioning, then dismissing the question of whether they really belonged here—I’m too glad to have read Amal el-Mohtar’s beautiful ‘To Follow the Waves’ to question whether it was ‘really’ steampunk (though on reflection my answer is probably ‘yes’). The very dark ‘Under the Dome’ by Teresa Wymore made me wonder if it was still ‘lesbian’ if it was post-human; but then this question of bodies and relationships and where personhood ends came up constantly through the collection (in Narayan’s and Wodzinski’s stories among others) and it was never a bad thing to have to think about. And there were many points at which I had to remind myself that “Lesbian Steampunk” need not mean “Lesbian Steampunk Romance”.

Like most anthologies, Steam-Powered: Lesbian Steampunk Stories varies in quality from story to story. But by any standards this is a solid collection with the good stories by far outweighing the less impressive ones.