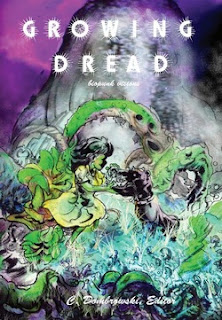 I have of late had something of a renaissance over my enjoyment of the short story. And it is primarily thanks to this collection of intriguing bio-punk stories. I hope to show what lively interest and thought processes the stories sparked, and invite you to get your own mind sparking on this witty collection.

I would like to begin considering something of the etymology of ‘bio-punk’. All the ‘punk’ sub-genres seem to share a common ground: that of being vehicles for exposing human fallibility and taken to its extreme, to examine the most personal of failures: hubris through pride. Someone is going to come off worse for the events told in the stories. There is also, in this view, a form of ritualised punishment for those who aim too high or too arrogantly; or for those who take to much advantage of such advances. The ‘punks’, irrespective of whether they add steam-powered anachronistic machinery or biological experimentation or flow along the fast lanes of the information super-highway, connect back to the ancient Greek tragedies. The protagonist’s position in those plays was as a lowly human, in contrast to the elevated status of the gods, and his fall when he attempts to prove himself their equal was played out as a lesson in morality and humility.

These short stories work well when read on those terms; as tales of warning. Not only of potential apocalyptic dangers dredged from the minds of the writers (and note that ideas once considered science fiction are nowadays finding their realities in science fact and technological development), but also of the question of just how far scientist-Icaruses should spread their wings.

Virtue is rewarded; innocence, honesty and repentance are given leave to continue. The patriarchal sub-mariner (‘God Bloom’), the desperate person utilising technology to try to reach a lost loved one (‘Boosting the Signal’), the bioengineered sex slave, released from her owner and forging a new life and responsibilities (‘Unchained Melody’), and the repentant Dr Circe, ready to give her own life to destroy her work and prevent another catastrophic war (‘Doctor Circe and the Separatist Man-Cheetahs’). The arrogant, the unrepentant, the selfish; these are punished; either directly in the action of the tale or by an implication sown in the reader’s mind that carries on after the recorded events have ended. These include a genetic engineer (‘Muffin Everlasting’), murderous scientists that find their own creation turning on them (‘Kundalini Rising’), the narcissistic cop (‘Necrosis’), lazy, wasteful societies (‘God Bloom’ and ‘Green, Green World’), and manipulative, selfish investigators (‘Aesthetic Engine’). But there are also ambiguities; what would modern speculative fiction be without its grey areas, after all?

The ‘evil’ actions of Queen Victoria at the very end of ‘Aesthetic Engine’ are seen as such by her victim; the proud investigator she has ordered to death. But why this value judgement? Is the monarch perhaps seeking to repress the machine and its dangerous power for the sake of Empire and man? Or will she use the powers it offers to rule forever in an alternative history? Then there is the machine itself: fuelled on beauty. Surely consideration over what constitutes beauty and the value we place on it is an area so grey with ‘for’s and ‘against’s, that the very crux of this adventurous steam-bio-punk Victoriana tale is one steeped in uncertainty. This is a juicy juxtaposition against the very in-period detail of the certainty of the characters that their cause is right. The modern cult of celebrity, primarily based on physical perfection, only goes to show this is one argument that will not lie down and die, and could well be hypothesised a strong influence for the writer.

Then there is the desperately ill scientist (this book positively overflows with men and women in labs) in ‘Neurolution’, fighting to engineer a brain from scratch in order to save his ‘self’ from an early death. We learn he plans to download his complete self into the brain of a genetically engineered life-form in order to live on. While it is a practical success, we are left wondering how much of a success. Is the homicidal strangulation of the scientist at the very end by the new creation an act of mercy or a twisted act of confused rage by a malfunctioning experiment? Should selfish desire drive scientific advancement? This is a relevant point to raise. A bio-punk book is all about questioning the ethics of biological ‘development’: the big question of morality discussed above.

But... is science not, in fact, mostly about the ‘niggle’ that won’t quit? It’s the personal quest for the scientist attempting to find a satisfactory answer to a question put to them by the observation of events and matter. What they are satisfying is essentially their ego: this is something I do not know, I do not like not knowing, I want to know! Then, by finding an answer, we believe we have control over what we have manipulated? A long-standing trope of morality tales is the element of a greater, more powerful force at work to thwart the overconfident. In earlier cultures it was ascribed to one or more deities. In modern times this is attributed to Nature: Nature the great Thwarter and Destroyer. We watch in amazement as storms, tsunamis and quakes render our best achievements to waste. Nature, given the weight of totality, is the one force that can defy and destroy us in the end.

And these fictions tell us again; nature will out, and she will come down heavily on us for our conceit. The hijacking eco-warrior of ‘God Bloom’ turns out to be something a lot more... vegetative, and magnanimously forgives the decent sub-mariner, choosing to save him, the innocent children he is treating to a ride, and the scientists in retreat in their undersea laboratory. These will be the ‘allowed’ seeds of a new humanity, while everyone else is in for a cleansing-away of Biblical proportions. The mariner’s patriarchal figure is further blessed with restored health and vitality: attributes this new Noah will need to rebuild the world. This is the germ of hope: these few, frightened people huddling under the sea: the place from where life first crawled. Why save us? asks the mariner. Because there has to be a balance, replies the girl; the youthful face of Mother Nature. Humankind is recognised as destructive, but necessarily so. These things go in cycles; we rise, but we must accept we will fall, in the knowledge that there will be a rise once more. There is no final end; there is only the start of a new beginning.

Finally, there is the questionable area of augmentation. Already we have the technology to tweak our wrinkles and shape. DNA research seems to offer hope of ‘switching off’ undesirable genes. Given these very real issues, ‘How To Hack Your Dragon’ makes us question, should a hedonistic young man be allowed to alter the genetics of his dragon (yes, a genuine, bio-engineered, scaly, flying, fire-breathing beastie) to ‘upgrade’ it? In the hero’s favour, he does show evidence of taking responsibility for his decisions. At first it all seems a game, but when the first tweak goes wrong, putting himself, his girlfriend, and possibly the whole city in danger, he does not slink off and forget it happened, but attempts to make amends; to re-work the problem and resolve it. He even starts to show the beginnings of feelings of affection for his new pet and alters his own genetic code to be able to smell it out when disappears. Underneath this, there is the steelier issue of control: with a few casual swipes of a keyboard, one can create a vial of goo to effect profound alteration. This is primal control over one’s self and immediate environment effected as casually as ordering a pizza. Added to which, not only can one create a mythic animal to order, but the type of animal, we are told, is itself a status symbol. The ego needs soothing; to keep up with the Joneses, crazier and more dangerous creatures are required. This is very similar to the first story in the book, where an engineer is stuck making possible whatever strange creature his boss’s drunken son blabs about next. Just where does the buck stop? One cannot help wondering how far we should be allowed to go to tweak for fashion—a notoriously fickle entity. The shadow of eugenics in media-hyped tales of made-to-order babies looms long over both stories, yet both are told with believable panache and detail. It is the grounding of the stories in believable reality that keeps them ‘real’ and applicable to the reader.

Just thirty or forty years ago, and these would be pure science fiction, but even the man on the street knows about genetic science and hoped-for leaps in health and wellbeing this promises. What keeps the stories even more rooted in current times is the very human element of them. The hubris, the pride: those aspects of the morality play are so recognisable that one can relate very quickly to even the most extraordinary of concepts; hybrid man-cheetahs, anyone? For stories based on the ‘futuristic’ hypothesis, they are surprisingly mundane because one realises that none of these biological adventures would be possible without the human curiosity and human drive behind it. Possibly because it is tied into a biological slant, bio-punk is a more recognisable ‘punk’ than the others; for nothing is more intimate or bonding between writer and reader than the shared experience of the human body.

And then there is the playfulness. At the beginning I called the stories ‘witty’. Even when the tone is dark and dire, the sprightliness of style, the pace (these stories all move along at a far old speed) and the dextrousness of dialogue and information sharing is something I can only call ‘witty’ to best express the light touch. The collection was a pleasure to read for its engaging quality with the reader. The editor knows their stuff.

Timid Pirate is a small, independent press, proudly claiming to be not for profit. It espouses on its webpages and literature that it loves to ‘take a chance with a story’, aiming to highlight narrative quality over readership quantity. With a motto of ‘Adventures unlimited!’ this isn’t a shy and retiring press, contrary to what the name suggests. The major project underway is Cobalt City, a collection of books and podcasts about a place populated by superheroes. The bio-punk collection seems a little off-centre from this, unless one considers that both genres critique human behaviours. Superheroes have long been the stamping-ground for the emotional/ethical debate (even in the 50s, during the more bombastic era of their genesis, they were aligned specifically to ‘goodness’ and ‘justice’ and by extension their opinions and feelings were ultimately justified); both of which are rooted in the human experience. The morality plays of the bio-punk collection would be natural cousins to such examination of the human condition. Both genres lie within the fantastic-mythic: fantasy really does earn its corn when it is used properly as a ground for expanding the debates on human experience. Growing Dread wasn’t dread-full at all (!). It was juicy, jolly, dark and light, and it was a pleasure to review.