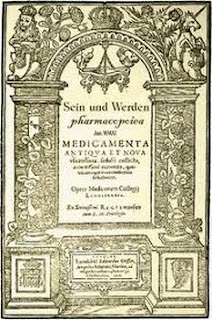 Sein und Werden is a small-press magazine published in Manchester, England by ISMs Press. Editor Rachel Kendall, in her manifesto on the magazine’s website, states that “the goal of Sein und Werden is to present works that evoke the spirit of the Expressionist, Existentialist and Surrealist movements within a modern context, which I like to call ‘Werdenism’.” The magazine is published monthly, both online and in print, with each issue hosting a theme for authors to adhere to. The print version publishes longer stories and poetry; the online version publishes shorter works. The January 2011 issue, Pharmacopoiea, includes stories revolving around medicine, illness, wounds and death.

‘Love Drugs’ by Willie Smith is a very short but powerful story about a man’s addiction to drugs. Unlike many addicts, he does not apologize for his addiction, but revels in it, even knowing that eventually the drugs will kill him.

In ‘Brauner’s Vision’ by Marc Lowe, Brauner is suddenly struck by an itch in his eye so deep and maddening that he jams his knuckle into it, blinding himself in that eye. He is already on his way to a Chinese medicine shop to pick up herbs for his wife, who doesn’t believe in modern medicine, so he decides to ask the acupuncturist to help him. As with many remedies, the cure turns out worse than the itch, which makes the man suffer hallucinations about his wife and the Chinese man’s son. Brauner tries to take off the medicinal blindfold covering his eye, but the acupuncturist won’t let him, citing patience. Eventually he frees himself and leaves the shop, only to horrify a passing woman with the condition of his eye. ‘Brauner’s Vision’ plays to several fears—doctors, blindness, pain, disfigurement, helplessness. This story will strike a chord with anyone with such phobias. This story was very well-written, suspenseful and full of paranoia. Excellent use of detail and mood.

Many people scoff at the notion of chiropractors. Michael Estabrook’s ‘Dr. Joe from New Mexico’ is a chiropractor who graduated from a “school” in New Mexico; his patient seems to be skeptical yet still willing to surrender to his ministrations. As the doctor and his assistant perform increasingly torturous, non-orthodox cures for the patient’s pains, he begins to feel older and more decrepit. ‘Dr. Joe from New Mexico’ demonstrates how chiropractic nay-sayers envision the practice and will scare off anybody who was on the fence about seeing a chiropractor. Estabrook’s story is a dark but amusing take on one of the most disrespected types of medical practice.

Nazi “medical” atrocities have been well-documented and have horrified generations. Major Calloway is searching for “Karas d’Carcasse,” an evil man who is knowingly selling infected penicillin that causes grotesque deformations in those it’s administered to. Wondering if this is yet another Nazi “medicine,” Major Calloway is relentless in looking for Karas. But when Karas is found, it is very clear that he has been using what he is selling. But was Karas a dealer who used—or a victim? ‘Karas d’Carcasse’ by Mark Howard Jones, is a grim story about dealers and their users that is just a relevant today, even though set in World War II.

Noel Slobada’s ‘Pluck,’ one of my favorite stories of this issue, shows how a single flaw can get in the way of a relationship. Gary is in love with Adara, thinks she is perfect. But one day he notices a hair protruding from one of her nipples and realizes he can’t stand the imperfection. Gary encourages Adara to get rid of it, and she agrees, but only if he is the one to pluck it. Although repulsed by the task, he takes the tweezers and pulls on the hair. But as the hair slowly comes out, it becomes a pile on the floor and Adara begins to fade away, leaving only a translucent outline of herself. As Gary tries to reach for her, she completely disappears. Flaws make us human; flaws make us who we are. Without our flaws, we lose ourselves as Adara was lost. And those who can’t accept our flaws are lost to us as well. This is the moral of ‘Pluck,’ and it is demonstrated very well by the author.

‘Pills’ is the second story in the magazine by Willie Smith; this time the drugs are crucial to a writer’s creativity and existence. ‘Pills’ explores the relationship between intoxication and the ability to still function. While the protagonist is writing and living his life, is it a good life? Do drugs make things better or worse?

‘Song of the Impure: a Love Story’ by A.A. Garrison is the longest story, as well as the best. Luke runs a suicide shop by day; by night he drugs himself with the fluids from the brains of those he has helped die. He feeds this fluid to the creatures in his aquarium, and once they are sated, he picks one to attach to himself with its tentacles, the tentacles administering the drugs he needs. One day he is roughly taken to a place by four men, only one whose language he can understand. Luke is told that he must “surrender his treasures” to save his city; he finally understands he must give up his creatures and his drug. Unwilling to do so, the city begins to fall into an Armaggedon-like state while Luke runs home to save his drugs. He also tries to save the woman he has been drawn to in the building next to his. Many drug abusers are reluctant to give up their habits, and Luke is one of them. Even at the risk of losing his home, his love and his life, Luke’s only thought is to get a fix. Drugs are a seductive, powerful lover, and this is made very clear in ‘Song of the Impure.’ This story is also filled with paranoia, which is a common trait drug users in these stories share, as well as addicts in the real world.

The weakest story in the magazine, ‘Untitled 22’ by Michael McAloran, is a stream-of-consciousness story that makes little sense yet does evoke disturbing, dream-like images. But images alone cannot sustain a story; strong plot is needed, in which, unfortunately, ‘Untitled 22’ is lacking.

‘Pockets’ by Zachary Scott Hamilton, is a murky story; it seems to fit in the new genre of “bizarre fiction.” While not my type of story, it is well-written and interesting. Poetry is also not my type of prose; however, as I read through the poems in the magazine—‘Marching Feet’ by Shannon Quinn, ‘Schizophrenia’ by D. H. Sutherland, ‘Friday Night with a Pen’ by Janann Dawkins and ‘Palpitategraphic’ by Zachary Scott Hamilton—I do recognize that the poems were written with great imagery and flow throughout. I found it interesting that scattered throughout the magazine are pictures of antique medical instruments and prosthetics, the kind that bring shudders to modern man.

I hadn’t heard of Sein und Werden until I was asked to review it. Rachel Kendall does a great job as editor; typos and grammatical errors are almost non-existent and the stories were well-chosen. Ms. Kendall’s “Expressionist, Existentialist and Surrealist” agenda—mostly the surrealist aspect—was met by the authors chosen for this issue, as demonstrated by their talent in storytelling. I enjoyed Pharmacopoiea very much, and will definitely check out more issues of this magazine.

Buy this issue from ISMs Press
Posted by Djibril at 17:28

Re. #22, it wasn't my intention for it to be a 'story' under any circumstances, nor was a 'strong plot' even considered...They are fragmented pieces and hence have no linear progression, merely associations...It's called 'automatic writing'...
Michael Mc Aloran...