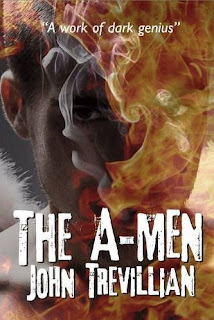 The A-Men and The A-Men Return are the first two parts of an anti-utopian trilogy, written by John Trevillian and published by Matador. The final part of the trilogy, Forever A-Men, is not yet released. The first two parts of this stunning, visceral dystopia concern a hellish world set in a dark future where the mega-corporations have all but vacated a devastated Earth for neighbouring moons. The narrative is divided into numerous character perspectives and the reader is led through the alternating streams-of-consciousness of the principal A-Men members.

‘The A-Men’ are essentially one of many gangs within the troubled Dead City, who randomly come together under the leadership of amnesiac Jack, also known as The Nowhereman. While it could be argued that the novel is wrapped around the actions of Jack, we also glimpse the world-views of: ‘Sister Midnight’, a tough-yet-kind religious zealot; ‘Pure’, a beautiful street-smart junkie who becomes obsessed with Jack; ‘D’Alessandro’, a slightly unhinged scientist inventor; 23rdxenturyboy, a young comic-obsessed urchin and ‘Dingo The Wonder dog’ his genetically spliced dogman. The author cleverly blends these individual perspectives, and the chapters give a vibrant, continuative narrative to follow. The danger of this kind of text, similar for example in the way David Mitchell writes Cloud Atlas, is the possibility of overlap, where a character’s language spills over into other stories. This thankfully doesn’t happen in the A-Men novels, instead the stories are intelligently crafted apart.

As mentioned, the central focus of both books is Jack. The novels essentially tell of Jack’s induced amnesia and his journey to unravel the whys, the whos, the wherefores of his existence. His sections of the book dominate, which proves challenging at times because there is very little to like about the man. Jack comes across as an angry narcissistic hedonist who shows little or no compassion to his fellow characters, except for those he wants to have sex with. His behaviour is continually without any kind of moral code, and it strikes this reader as remarkable that his fellow A-Men feel inclined to do anything for him. This threatens the text at times, as it is difficult to understand where character motivations come from and the narratives struggle at times to justify character behaviours. However, the story is told at such a pace, this doesn’t detract enough to derail the novels.

Most startling about the novel is the sheer volume of swearing. I am in no way offended by bad language, and the inventive use of four-letter-words would probably impress the likes of Richard Curtis. This said, the overt use of certain word, in certain contexts, makes Jack especially appear highly misogynistic and perpetually angry towards the women in the novel. The language entwines the accounts of violence and sex throughout the books to the point where they occasionally blur. Sometimes this really works, sometimes it doesn’t. Lines like “Pull out my D&K (gun). Feels good in my hand. Feels like a dick when it’s hard. My metal cock. Ready for fucking” sound more like a line from an immature pubescent rap artist than a literary protagonist. Fortunately, this only occurs occasionally as Trevillian writes to a very high standard. The linguistics employed in the novel are innovative, refreshing and funny, the humour snakes through the book and I laughed out loud a number of times. The vocabulary is delicious throughout, and during the times where the novel slows, this keeps the narrative alive. There is a distinct William Gibson feel to the language. While in my opinion the story itself isn’t quite as good as, say, Neuromancer, the language is superior. At around 400 hundred pages each, there is a thoroughly entertaining story running throughout The A-Men and The A-Men Return, but there were times I felt it was diluted by the volume of the books. I must stress however that, even if the books have been padded, they remain incredibly entertaining.

Besides Jack, the characters themselves sometimes lack development and, as I have mentioned, a reader might sometimes wonder what their motivations are. Survival would be one, perhaps that the other options available to them render Jack the most viable, but it becomes difficult to distinguish for the reader. There are some quite elaborate yet indulgent passages that add little to the story. At great risk, Jack emancipates Sister Midnight from a religious commune and has sex with her, only to dump her completely, in addition to the other A-Men, when the pneumatic Pure comes along a few pages later. The A-men as a gang seem to impress quite a reputation upon other gangs within Dead City, and I couldn’t quite fathom how this reputation was manifest. There is kind of legendary reverence about them, and I would argue it isn’t really justified. Jack and Sister Midnight are the principal fighting antagonists for the A-Men and seem to have earned the group’s reputation more though luck than endeavour. This does not impinge upon the story one jot, but for a while I found this to be a curious assumption on behalf of the other gangs that served the A-Men well. 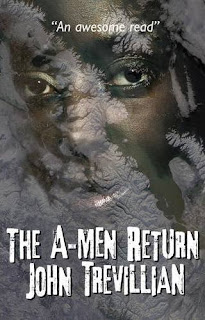 There is great depth in both novels; themes include family, religion, identity, fairy tales, sex, drugs, computer games and virtual reality. I would suggest that Jack’s misogyny sometimes becomes a little overbearing upon the narrative, and the continual referral to Sister Midnight as ‘black’ is a peculiar and disconcerting. This is unlike most dystopias I have read and there is little focus on the collapsing society, rather it concerns itself more with the journey of the protagonist Jack. If Jack was a little more likeable, for me the books would be even more engaging. But, as a reader might struggle to endear themselves to Jack’s narcissism, they must rely on the soaring language used in the novel for pure engagement. The language is utterly uncompromising and, while it occasionally slips horribly, Trevillian’s use of words is both fantastic and mesmerising in equal measure. I eagerly look forward to the conclusion of the trilogy.