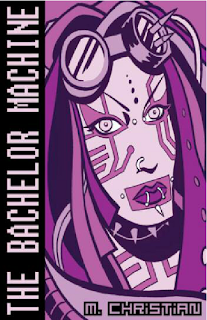 The opening story in this collection, always important because it sets the reader’s expectation for the rest of the volume, is the finely crafter ‘State’. A blue-skinned, élite (and expensive) robot-whore with a secret welcomes a discerning john into her room in the bordello and fulfils his fantasies with machine-precision. There is not much plot in this story, just one sexual encounter between a whore and client; apart from the protagonist’s robot nature (and blue silicon skin) this wouldn’t really need to be a science fiction story; nor is it particularly sexy. “Fields” (the whore) technically has a certain amount of initiative and therefore power by virtue of her deceit, but this is still the story of a john using a hooker, and neither character has much to endear them.

The next couple of stories in the collection (‘Bluebelle’ and ‘Winged Memory’) did little to dispel the notion that characters were all going to be shallow and obnoxious, and the sex graphic but unappealing. But then comes perhaps the darkest and most poignant piece in this volume, one much more about the characters than about the sex. ‘Eulogy’ is a very dark tale of a man and woman who get together to remember a flawed genius engineer they both mourn, and they seem about to topple into a pathetic (although at least guiltless) comfort fuck which she thinks of as a eulogy to her dead lover. But their memories and their relationships with the dead man (and his mysterious disease) are obviously more complicated and more problematic than the reader at first realizes, and what starts as a depressing but harmless seduction scene becomes deadly serious. The lightly but convincingly sketched characters reveal surprising depths of complexity. From the sci-fi perspective, there is some beautiful description of water-parting wave technology in the backstory.

Perhaps the best crafted piece in the volume is ‘Guernica’, which recounts a hard core S&M sex party in a futuristic dystopian state where all such pleasure is strictly banned and penalties for abuse are brutal. Although in outline this story is little more than an extravagant litany of transgressive and sadomasochistic sexual scenarios, it somehow builds to a whole greater than its parts. The dystopian message is a powerful one, and the piece ends up casting light both on the intolerance of society and on the mentality behind sexually motivated threat/fear play. Here is a great example of graphic erotica that serves the purpose not of titillation, but of social commentary and satire. After reading the end of this story, I had to put the book down for a while and get my head around what I thought, which is an excellent sign for any piece of writing.

In a more traditional cyberpunk story, the heroine of ‘Heartbreaker’ is an undercover cyborg vice cop, infiltrating the hidden, run-down premises of a ring responsible for “drugs, puppets, illegal stims, stolen memories, and [...] slavery” (107) in a high-stakes sting operation. She has been hunting the notorious kingpin, known only as “Heartbreaker” for years. Inside, she encounters only a naked young girl, almost as modified as she is, who appears (but only appears) to be “barely legal”; there follows a lengthy scene of very hot, very dangerous, almost violent lesbian sex, as the cop keeps the perp occupied while her backup team can trace the operation and mount a raid. But she has more than met her match in this sexed-up cyber-girl, ultimately both sexually oustripped and (of course) outmanoeuvred. There’s not so much of a moral to this story, but it is a well-constructed short thriller.

‘Skin-Effect’ is a much darker, but essentially much simpler tale of a military cyborg—a “brain in a polyarmor combat frame”—who has evaded the obligatory PSTD treatment and misses the rage, violence and distruction of war. On the recommendation of a now-lost comrade, he visits a patchwork whore-bot who is even less human and more fucked-up than he is, but who may have a solution to his problems. Ironically, all of the sex and all of the kink in this story are in the world of flesh, pre-war and pre-cybernetic, so neither the military technology nor the psychotic pathology are invoked.

At once more mundane and more fantastic, ‘Sight’ is the story of the only human artist whose work is popular with the superior alien race who bestow limited technological largesse upon the people of Earth. Our artist is horrified to discover that his priceless works are, to the clients who have made him super-rich, mere pornography. His artistic purity sullied, he is unable to create until he relearns—graphically, of course—the value of “beauty and lust” (156). Despite (or perhaps because of) the present of the aliens, this may be the most human story in the collection.

Finally, we are ushered to a climax by the title story, ‘The Bachelor Machine’, saved for last, and perhaps containing the most pathos and poignancy of all. It is also probably the least sexy story in the collection, in as much as the graphic descriptions of flirting, foreplay and fucking are designed to be unattractive rather than titillating. Our hero, a drifting in a post-apocalyptic cityscape, visits a decrepit and barely-functioning robot whore; reminded at every step of her artificiality (both in terms of manufacture and of faked sexual interest), of the countless men she has serviced, and the disrepair this has left all over her ruined chassis. Telegraphed a mile off, it is no surprise to learn that the drifter is actually the whore in this relationship, paid to make the has-been sex-bot feel wanted when no one would pay to have sex with her now; more surprising is how Christian manages to imbue this relationship with a certain tenderness, a sense of sympathy for these decayed characters whose best is behind them. Another case of the erotic motif used to tell a human story, perhaps the most important story of all.

There are technical problems with this book; not really enough to spoil the reader’s pleasure, but more than you would expect even from a small-press publication. A scattering of infelicities and repeated words, clustered more in some stories than others, are little more than typos, although they should have been caught by an editor. More interesting, although a subjective taste, is Christian’s penchant for rich and poetic metaphors, sometimes bordering on the synesthetic, whose beauty he then undercuts by feeling the need to explain them in the adjacent phrase (an example: “pulsing advertisements: product-placement nebulae” [157]; either half of that expression would have been enough). On the whole, the erotic passages are a bit better written than the science fiction.

Perhaps it is not the role of erotic literature to titillate or sexually excite the reader; this is not, after all, mere pornography. Personally, I find most erotica too personal, too geared to the kinks of the writer (or, I should say, of the implied narrator, since the author’s own sexuality is not necessarily revealed in his work), to work for me; I couldn’t even appreciate a classic eroticist like Anaïs Nin, for her brand of mildly kinky sex is not mine. So I would be reluctant to argue that Christian’s erotica fails to titillate, as I hinted above and have been suggesting throughout this review; in fact on the contrary, there is such a wide variety of sexual preference, performance, and function in this collection that there will be something for almost everyone (and something to turn off almost everyone).

More to the point, however, the sexual content in stories such as these serve rather to remind us that we’re human, that our concerns such as love, lust, companionship, rejection, nostalgia, however fleshy or base, are universals. The sex in these stories serves as a microcosm for all of life, for social observation, for political satire, for the promotion of tolerance. In other words, the role of sex in well-written erotica is analogous to the role of technology in science fiction, or magic and beasts in fantasy: yes it’s exciting, yes we take a geeky or prurient interest in them, yes we enjoy them for what they are, but ultimately they’re the tools that tell a bigger story, that paint a more important picture. And on these terms, Christian’s science-fictional erotica is very well-written indeed.

WONDERFUL - I'm very touched you liked my book. You made my day!