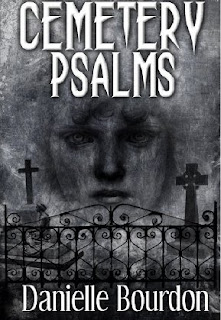 Cemetery Psalms is an e-book collection of five stories that take people from everyday life and throw them into unusual and sometime horrific situations. The author, Texas-based Danielle Bourdon, is the author of two novels, Dreoteth and Bound by Blood (both 2010); a third, Sin and Sacrifice, is forthcoming. The cover art is less than impressive; it shows a face over a graveyard that looks like an afterthought for the collection. However a book shouldn’t be judged by its cover, an adage proven by the stories collected here.

Everybody loves a good ghost story, and the teens in the story ‘The Haunted Carousel’ have lured a friend to “Gravity Hill,” where supposedly ghost children push cars up a hill in the road. Although the friend, Mark, tries to act brave, he is visibly shaken when the car actually moves. Pleased with the results, the group decides to go visit an abandoned farm that features a haunted carousel. Will this adventure end with the desired result as well? This story takes what is a joyful children’s icon and turns it into the ride from Hell. This carousel doesn’t have the usual horses and unicorns; this merry-go-round boasts a mime, a devil and a court jester. I enjoyed ‘The Haunted Carousel’ very much; it was well-written and even gave me the creeps. However, I don’t think the last scene was necessary to the story. The last scene seemed tacked-on, and cheapened the story somewhat, like a movie in which the antagonist jumps up at the screen before the credits roll.

In ‘Petrified’, a married couple searches for a shop called “Surlee’s” that sells beautiful carved items out of petrified wood. They look around the wonders of the store, fascinated by the faces carved into wood, some sorrowful, others terrified. As they reach the back of the shop and go outside, they find out the secret to the beautiful artwork. ‘Petrified’ is a fun story, although somewhat violent towards the end. The story is unique and told well, even though it might have been better if the antagonist hadn’t told the woman exactly why and what was going on. A little mystery would have made the story creepier.

The weakest story of the collection, ‘Music Box’ uses the “’til death do us part” meme, but doesn’t do anything different or clever with it. A man who has killed both his wife and himself in a fiery car crash has immortalized the two of them in a music box, him playing the piano and her dancing. The box is passed down through the family to keep their love alive. The details of the story are interesting; the music box has been carved into a miniature ballroom that mirrors the one in the home they shared together. The reason for the murder-suicide doesn’t make much sense; there is no other man or other woman to come between them, no threat to their relationship. It’s just a selfish act that really makes no sense in the context of the story.

‘I Am Ellis Moore’ is the story of a man who sneaks around his house, foraging for food. He is not wanted there; another family lives in the house although they hear things and think the house is haunted. Soon it becomes apparent that this is a ghost story/haunted house story, and discover that even Ellis Moore isn’t quite aware of what he is. This is the other weak story in the book. Haunted house stories need a good twist to make them scary and interesting; unfortunately, this twist in this story is telegraphed from the beginning. I’ve read this type of story many times, and ‘I Am Ellis Moore’ doesn’t stand out in any way.

‘Chameleon’, on the other hand, is a fun story of a man who drinks his ex-wife’s special tea called “Chameleon,” and proceeds through his day, taking on the emotions of everyone he comes into contact with. As Thaddeus finds out, this can be both a blessing and a curse. What happens if he comes across a robbery, a basketball game, a lover’s spat? In a way, ‘Chameleon’ reminded me of the wonderful story by Richard Christian Matheson, ‘Echoes’, in which a man is suddenly tortured by the voices of people who are suffering until they drive him insane. Thaddeus doesn’t go insane, exactly, but he is deeply affected by the emotions of those around him. I enjoyed ‘Chameleon’ very much, it was extremely well-written and fun to read.

Danielle Bourdon has put together a good, solid collection with Cemetery Psalms. Although at times flawed, the stories were mostly well-written and the details kept me involved in each story. I haven’t read anything else by the author, but would gladly check out her other works.

A huge thank you to The Future Fire (and Sheri White) for the review of Cemetery Psalms!

All the best,
Danielle Bourdon