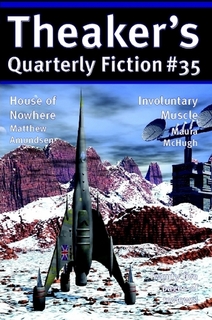 Theaker's Quarterly Fiction, edited by Stephen Theaker and John Greenwood, started out in 2004. The magazine aims to publish stories with an element of the fantastic, defined as: hard sf, soft sf, fantasy, heroic fantasy, dark fantasy, humorous fantasy, slipstream, magic realism, horror and terror. In their publishing statement the editors say, “Difficult, arch and oblique writing is a lot of fun. We certainly don't demand it, but it's something we enjoy when submitted. I love to be sent to the dictionary when checking proofs.” With disarming honesty, the publishers ask potential submitters to take note of the magazine’s uncertain credentials and tiny print circulation. All of this is either an indication that the magazine has a true spirit of independence about it, or perhaps just wants to keep submissions down. In this issue they have made the unusual decision to combine a short modern horror story by Maura McHugh and a dark rambling fantasy novella of 65 pages or so by Matthew Amundsen. These two stories, together with 25 pages of reviews, make up the entire issue.

Maura McHugh’s ‘Involuntary Muscle’ is a dark existential horror story in which a woman’s superficially perfect life begins to unravel following an unexpected pregnancy. The writing is precise with strong imagery. The story opens as Lilly, “with a smile so automatic she can no longer judge its authenticity” begins to realise the fragility of her existence and has the first intimations of unsettling forces as work within her. The “grit of cigarette smoke” is the kind of minutely telling detail which McHugh exploits brilliantly—what could have been a perfectly banal memory of her mother’s smoking becomes a deeply alienating fear of becoming like her mother with a hint of disturbing early memories. The horror is subtly brought out in startling half-revealed images. It is this light touch which makes this story so effective. McHugh manages with admirable conciseness to convey Lilly’s disintegrating state of mind and the horror of the ‘monster within’ which Lilly cannot bring herself to talk about with her bland friends. I was gripped by this character’s inevitable slide into doubt and self-recrimination. Definitely not a story to be read by expectant mothers!

‘House of Nowhere’ by Matthew Amundsen begins well with a fluid undefined setting. I couldn’t decide whether the setting was post-apocalyptic or just run-down but found the vagueness interesting. The plot revolves around a manipulative magician, known simply as The Conjuror, and a boy whom he has kidnapped and imprisoned. The Conjuror uses the boy to animate and manipulate a golem-like creature he has created to rescue himself from the decaying house which forms the setting for the story. So far, so good... Amundsen sets the story going and has a flair for imaginative and stomach-churning detail: shelves full of bottled worms, a horrific array of nightmarish devices and torture implements which he uses to gain the boy’s co-operation. However, the description slowly becomes more and more impenetrable with flights of literary fantasy that serve merely to puzzle and obfuscate. The following passage illustrates Amundsen’s skill at creating dream-like images at the same time as he loses a grip on clarity and communication.

Visions like dreams assaulted him. Rivers of blankets scared rigid without ripples under the baleful headlights of the Cyclops search party releasing pigeons plummeting to the earth flowing blood carrying tourist parties along crocodiles’ jaws to a periphery of silver shining a signpost tunnel pasted round with faded pictures of a sinking house and its grand pink topiary clasping skeletal welcome fingers. (34)

Not even poetic licence can justify the lack of grammatical coherence in these lines. This is a great shame because I get the feeling that Amundsen has a powerful sense of his created world and he risks alienating readers with these kind of riffs. I found these descriptive passages, of which there were many, tended to fragment the narrative rather than enriching it, making the reading a tortuous exercise in interpretation.

The best writing comes when Amundsen is conveying the golem’s journey, under the boy’s psychic manipulation. The writing flows well and I was intrigued and pulled along by the story. About three-quarters of the way through, however, there is an abrupt plot development which left me floundering for meaning and motivation. If the story had been more conventionally plot-driven, Amundsen might have managed to get away with his literary quirks but having set up the boy’s psychic link with the golem creature as a major plot device he just abandons it.

It’s perhaps no surprise to read in the editorial that ‘House of Nowhere’ began life as a 500 page novel. My feeling is that, in attempting to condense 500 pages to 70, Amundsen has jettisoned some of the plot and character development that might have justified the abstract ending which takes the form of a battle of wills between the Conjuror and the boy. Lovers of dark fantasy will still appreciate the rich detail and energetic action sequences but for me it lacked the coherence and completeness of a story.

Overall, this is a bit of a chalk and cheese issue. The writing is certainly dark and imaginative but, in the case of Amundsen, the editor’s penchant for the “difficult and arch” left me wanting to reach not for the dictionary but the please translate-from-incomprehensible-to-plain-English device.

Buy this issue from Lulu.com
Buy back issues from Theaker's Quarterly Fiction
Posted by Djibril at 09:40

Thanks for this detailed and thoughtful review. I somewhat disagreed with your take on the second story, 'House of Nowhere', which I enjoyed, if anything, more than 'Involuntary Muscle'. Where you saw rambling prose I read a fanciful, playful fantasy; where you found the language puzzling and obfuscating I thought it was irreverent in a way that added to the poetry. Even the passage you cite in your review read differently to me: where you describe the grammar as bad, I took that as deliberate indication of the dreamlike (slash-nightmarish) quality of the events being desribed in that sentence. Stylized stream-of-consciousness, as it were.

Having said this, I think our differences come down entirely to taste, rather than any fundamental issues. De gustibus.

(I'm not sure I'd have read a 500-page novel of that story, however. Even if it did make the man in the city something more than a major red herring.)