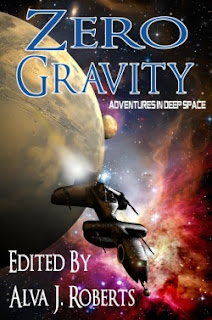 Zero Gravity: Adventures in Deep Space is an anthology themed around stories firmly rooted in long term space exploration or in futures so advanced that space-faring ships have become the norm. Science vessels, space smugglers, and interstellar churches populate the book alongside alien beasts and creatures from beyond. Beyond the A.I. Singularity, beyond the edge of the solar system, sometimes beyond the light of the furthest stars, they are stories that deal with the future of humanity’s inevitable move to the stars with ideas rooted firmly in our social evolution, or lack thereof. The science in some stories may be farfetched, but how the characters deal with it is not. There will always be crime, there will always be fringe elements that live on the edge of social acceptability and even further, in the places others fear to tread. Human exploration has always been driven by a need to discover a better life, a place where one could live the life one wanted or a place where riches were abundant. Cities of gold, trade routes, lands of freedom. We are always looking for something better: there will always be those willing to take advantage of others if it means an easy score; always those who seek the precious freedom of living on their own terms, even when it means eking out a meager existence on the edge of survival.

The anthology opens with one of the latter, the story ‘Junker’s Fancy’ by Rosemary Jones (1), and it’s a strong opening, quickly pulling the reader into the far reaches of the solar system. It concerns a Junker—one of the space salvage operators who live most of their lives in their ships with minimal systems to extend time between dockings—named Jacie running across a major haul, a big government ship dead in the water. The only problem? One of the crew is still alive, but he doesn’t have long. What to do? Jones sets up her universe rather nicely in just the first few paragraphs so that when events start truly playing out, you feel at ease with the story. Every fantasy world has its own lexicon and hers is easy to grasp and understand quickly, helping drive the story telling forward rather than bogging it down in attempt to pepper her universe with flavor. Jacie is a character who lives most of her life alone in the far reaches, only docking to resupply. It’s an eremitical lifestyle and her unexpected passenger is a disruption, but is it a welcome one?

Also quite good was Kenneth Mark Hoover’s ‘To Stand Among Kings’ (88), which contains in its short span such a wealth of information about its particular universe that it is clear the author must have spent a significant amount of time creating races and political affiliations and seriously considering the evolution of society before beginning to write. This is a universe where the Church has split off so many times it has completely separated from Earth itself. The story is one of political intrigue and trade agreements, betrayal and wars fought over resources and the rights of an indigenous people. The ending was a bit weak, but the journey to that end was, as it always should be, pleasantly satisfying.

‘Tangwen’s Last Heist’ by C.B. Calsing (146) was a story that at first felt a little flat; it started out a bit too generic for my taste but managed to rope me in as I read on. It is the story of a smuggler who gets in over her head trying to go legit, and it is quite possibly my favorite of the book. Tangwen’s contract target turns out to be a little more heavily connected than even her client expects and a snap decision at a critical moment puts her into even hotter water than she had been in before. A bad situation for a girl simply trying to retire. Faced with an impossible situation, Tangwen attempts to do the right thing, only to be met with political corruption that seeks only to punish rather than listen.

All in all there are no singularly bad stories in the collection, but some are flawed. Some are perfectly good except for certain passages which feel weak or rushed. Others simply never quite live up to their subject material, such as Will Morton’s ‘Glacier Castle’ (188), which had some of the least credible dialogue in the book and was generally a mess. ‘Glacier Castle’ is the tale of a wrecked colony ship, woefully off course and stranded on a bitterly cold and inhospitable ice planet. In an effort to keep up morale while the ship’s crew effects repairs, it is decided that those not otherwise occupied would use the building equipment at hand to construct a great ice palace. The dialogue is clunky in places, the timeline difficult to follow. There are moments when I’m not sure how much time has passed or who exactly certain characters are. There is invented slang that never gets defined enough to make it feel natural. It is not a bad story on the whole but felt as though it needed another pass or two by the author to be ready for publication.

As a whole, Zero Gravity is full of stories that seem to understand that humanity is no longer physically evolving in the original sense. We no longer worry about those genetic markers that in the past made a mate unacceptable. Today we evolve through social interaction and technology and this will most likely still be the case as we hurl ourselves outward beyond the stars. On the perimeter of the universe it will be our technology and our ability to co-habitat with our fellows that will serve us and I feel this collection gets that right. It is just plain good reading that should easily please any fan of deep space fiction. It is light, good for afternoons on the porch or, if you’re like me, a quick story to relax a bit before bed.

Can I ask, is there anything fresh about the stellar environments in the book?

I suppose what I'm getting at is that so many typically "sci-fi" novels embed the reader in the kind of sleazy space-pirates/bounty-hunter/legitimate traders/smugglers universes that were retro even when Star Wars was written.

A good question, and one I probably should have answered in the review.

If I'm being honest, the answer is no. A few of the stories try very hard to step out of that model, such as 'The Unicorn Tree', but mostly it's pretty standard fare. In the case of 'To Stand Among Kings', it was one that stood out to me personally because it was reminiscent of 'Dune' rather than Star Wars.